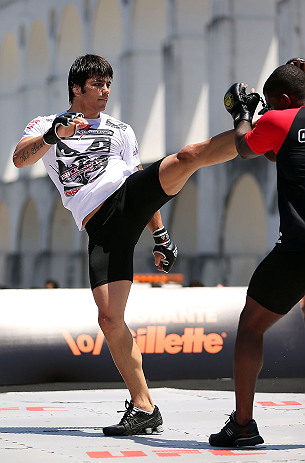 Erick "Indio" Silva is happy - very happy - to be fighting in his home country of Brazil against big-name opponent Jon Fitch on the main card of UFC 153 this Saturday night in Rio de Janeiro. To understanding why the fighter is in such a good mood now, it’s important to remember what the welterweight prospect went through in his first two UFC bouts in Rio.

Despite facing his originally scheduled opponent, Charlie Brenneman, in his last bout at UFC on FX 3 in June, the X-Gym representative never had the same 'luck' when he was fighting at home.

Before the fight which resulted in a big knockout over Luis Ramos at UFC 134 back in August 2011, Erick was supposed to face TUF 1 veteran Mike Swick. But the AKA member withdrew from the match due to an injury and the Brazilian ended up facing his countryman in Ramos. In early 2012, the story repeated itself, but with a different outcome. Scheduled to face heavy hitter Siyar Bahadurzada, the welterweight division’s Silva collided against another countryman, Carlo Prater, and lost by disqualification.

With that said, you can imagine why Silva is smiling when talking about a full camp focused on one man from beginning to end.

"This is superb," he affirms. "We can plan, study the foe's game, and put together a great strategy, but when an adversary changes, it’s tough to adapt. But those things happening were good to show that we can impose our game when we don't have much time to prepare for a specific new opponent. I'm very happy for this too. I train to dictate the pace, it worked, and I showed what I could do. And against Jon Fitch it's not going to be different. He's a top five fighter, but our tactics are to impose my style over his."

So far so good. But at any moment of his training camp did his coaches slow the pace, expecting that the bad news of an opponent switch were happening again?

"We were prepared since we’ve got experience in this. We're facing a veteran of the UFC, a former title challenger, so this was the chance for me to use this experience to train smart and not get injured, (hence) losing the opportunity of facing a high caliber fighter like Fitch."

There is no doubt that Fitch is the biggest challenge in Silva's career, mainly if we look at the fighters he faced inside the Octagon: a former Shooto champion, a former WEC title contender and a tough wrestler. One after one, "Índio" was climbing up the rankings, even with the defeat to Prater, which the Brazilian fighter doesn't believe harmed his run through the welterweight division.

"I face things that happen in my life at the correct time," he says. "I understand what my career is going through now but look at Fitch; he got his title fight after eight fights. We need to only think about working."

Working hard and observing the division are two things Erick does well. The Espirito Santo native keeps his focus on hard training and his eyes on the welterweight rankings. This is a routine he adopted to realize where he fits.

"You need to be up to date on that," he said. "The professional fighter needs to be aware of what's happening in his division. A few days ago I finished my training and the TV aired fights with UFC welterweights. My teammates asked, 'are you going to fight them?' I said 'no', but I need to keep my eye on the division because you never know who's going to be your next opponent. I don't freak out like, 'I need to fight top 10s, I need to fight top 10s,’ but I need to have knowledge of who is ahead of me."

And now he's fighting a top ten, not just that, but a talented fighter with great wrestling and grappling skills in Fitch. The former challenger for the welterweight belt’s main weapon is the ground control where he drags his opponent to the mat and pressures him for 15 minutes or until he gets an opening for a submission. Silva knows that, and his strategy and his outlook for the fight is very simple.

"He never faced a guy who moves like me," Silva says. "He's very good on controlling the clinch and taking people down, but for it to happen he needs to reach me first. Of course this is a 15 minute fight, and perhaps he can find the perfect time, but I'm prepared to defend and to fight wherever I need to. Fitch is a good with his game plan, but I'm explosive and confident.

"Fitch will face the best Erick Silva who ever stepped into the Octagon," he continues. “Each fight I evolve, I get stronger, and I’ve dealt nicely with the weight cut. I'm coming from three good fights and I'm very excited for this challenge. I’m pumped."