Prepare for UFC 273: Volkanovski vs Korean Zombie by looking back at the best UFC Jacksonville moments!
By Miguel Navarro III, on Twitter: @migsnavarro15 • Apr. 8, 2022

Large gatherings of people were banned worldwide, leaving the sports world with no other choice but to sit and wait. Yet while other sports organizations came to a halt, UFC President Dana White was determined to be the first sport back.

Originally, UFC 249 was scheduled to take place in New York, but the event was postponed since all large crowd gatherings were banned for safety purposes. It was later announced that events in Jacksonville would be possible as long as the events were closed to the public and stayed within the new COVID-19 protocols. White jumped at this opportunity, fulfilling his promise as being the first sport back.

On May 9, the fight company returned with UFC 249: Gaethje vs Ferguson. On a night jam-packed with unforgettable moments, there couldn’t have been a better return for the promotion. In the process, Jacksonville became a beacon of normalcy because sports were officially back.

Since then, the UFC has held a handful of memorable events at the VyStar Veterans Memorial Arena. Before the return to Jacksonville for UFC 273: Volkanovski vs Korean Zombie this Saturday on April 9, take a look back at some of the best UFC Jacksonville pay-per-view moments. 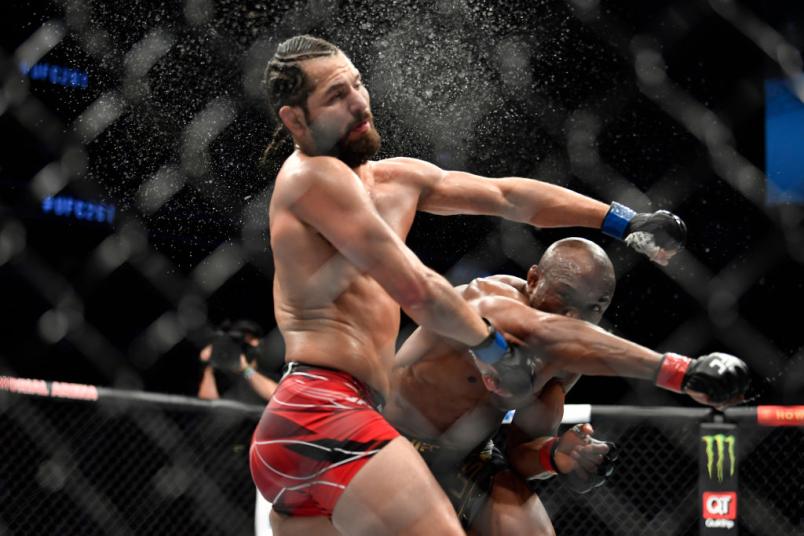 For Kamaru Usman’s second title defense, he was originally set to defend his welterweight championship against Gilbert Burns. However, it was later reported that Burns had tested positive for COVID-19. On a week’s notice, Jorge Masvidal accepted the fight against Usman. The champion would end up retaining his title, winning the bout by unanimous decision. A rematch between the pair was immediately scheduled to headline UFC 261.

This time, Masvidal would have a full training camp to prepare for the champ. As for Usman, it was another chance to finally put an end to one of his rivalries. This time, the champ didn’t need the full 25 minutes. Early into the first round, Usman was finding success with the right hand. His striking had clearly improved since the last time the pair met.

In the second round, Usman would find his opening and land a clean straight right to the chin of Masvidal. When the punch landed, Masvidal crashed to canvas and the fight was over. For his fifth title defense, Usman ended his rivalry with Masvidal in spectacular fashion.

After failing to capture the UFC heavyweight championship, Francis Ngannou was determined to find his way back to gold. Ngannou’s rise through the rankings at heavyweight was quick and extremely impressive. With a 100% finishing rate, Ngannou was one of the most dangerous fighters on the planet.

In 2018, for the first time in his career, Ngannou would lose his next two bouts. Ending the year on a high note, Ngannou knocked out Curtis Blaydes to bounce back in the win column. On his way back to challenging for gold, Ngannou was becoming undeniable after knocking out two former heavyweight champions. For his 12th bout inside the Octagon, Ngannou would meet Jairzinho Rozenstruik at UFC 249.

Twenty seconds into the first round, Ngannou bull rushed Rozenstruik, throwing wildly with the intent to end the fight right there. While backing up towards the cage, Rozenstruik was caught with a punch that immediately sent him down and out. Increasing his win streak to four, Ngannou had made the statement he was looking for. 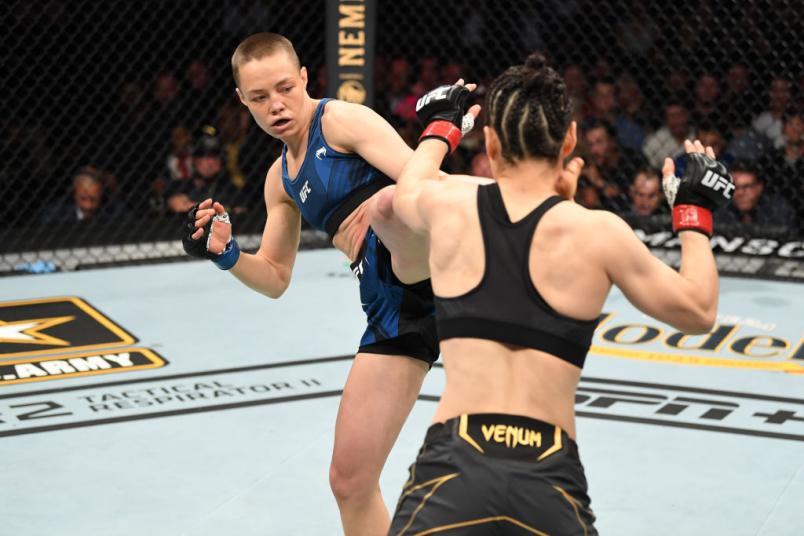 After losing her UFC strawweight championship and avenging her loss against Jéssica Andrade, Rose Namajunas had done enough to challenge champion Zhang Weili for the 115-pound title. This would be Weili’s second defense as champion, as she had just beaten former strawweight champion Joanna Jędrzejczyk in what many deemed to be the Fight of the Year.

At UFC 261, Namajunas would get the opportunity to reclaim the championship belt she lost a two years prior. In the first round, the Wisconsin-born fighter landed a kick flush on the face of Weili. The champion collapsed to the canvas and was unable to protect herself, forcing the referee to call an end to the contest. Rose Namajunas made history that night by becoming the first woman in UFC history to regain a championship title after losing it. 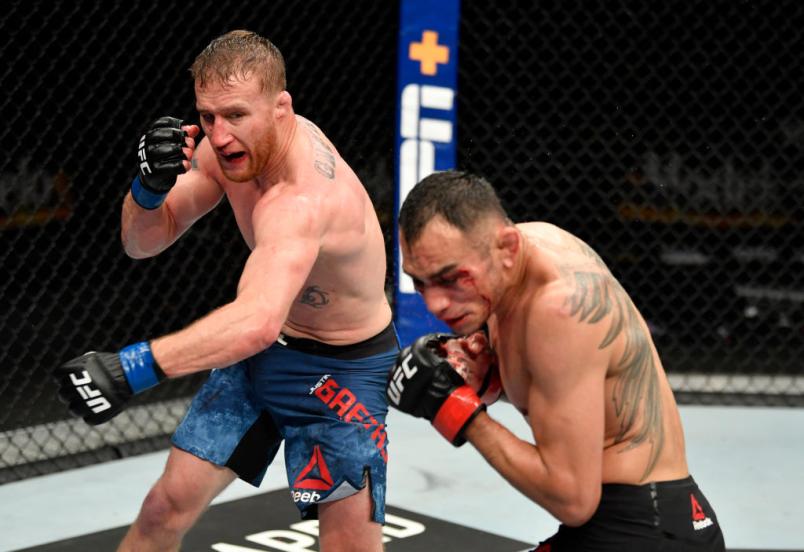 Ever since joining the UFC in 2017, Justin Gaethje has become a must-watch fighter. Always delivering unforgettable moments, the Coloradan doesn’t know how to have a boring fight. Nor did his opponent for UFC 249, Tony Ferguson. Originally, UFC 249 saw a different main event, as the long-awaited bout between Ferguson and lightweight champion Khabib Nurmagomedov was initially supposed to headline at the Barclays Center in Brooklyn, New York. COVID-19 scrapped those plans, as Nurmagomedov had no way of getting to the States due to the worldwide travel ban. As a result, Gaethje stepped in to fight Ferguson for the interim UFC lightweight championship.

Gaethje was having the performance of his life against Ferguson. On the scorecards, Gaethje was winning every round decisively. With his relentless pace and powerful striking, Gaethje didn’t plan to leave the bout in the hands of the judges. In the fifth round, Gaethje's pace didn’t lessen one bit. Ferguson had accumulated so much damage over five rounds, and after being stunned with another combination, referee Herb Dean had seen enough and called an end to the bout. When UFC President Dana White wrapped the interim championship around Gaethje's waist, Gaethje took the belt off and threw it on the canvas. Gaethje's then stated, “I’ll wait for the real one.” 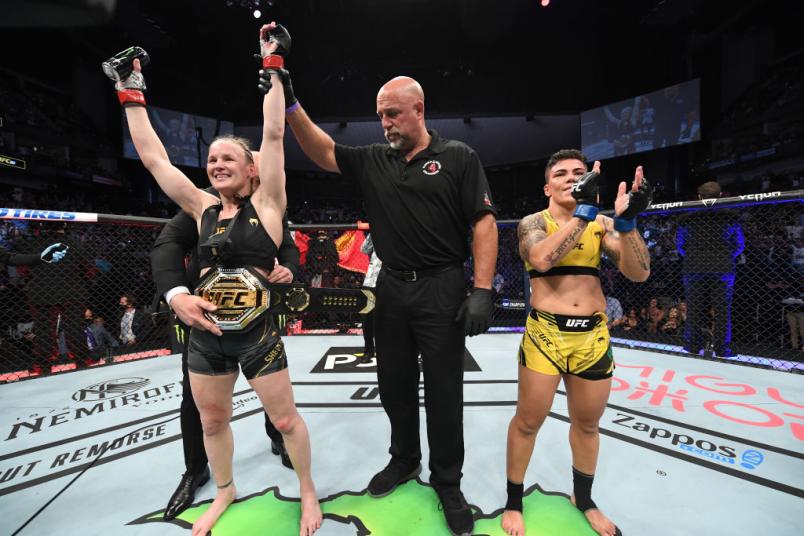 Featured before the co-main event of UFC 261, Valentina Shevchenko defended her UFC flyweight championship against Jessica Andrade. After a long run and winning the championship in the 115-pound division, Andrade decided to make the move up in weight to challenge Shevchenko. Shevchenko had the size advantage, but the biggest question was how the champion would react to the power of Andrade.

In the first round, Shevchenko relied heavily on her wrestling and grappling, successfully getting Andrade to the ground five times. Finding great success taking Andrade down, Shevchenko stuck with that game plan in the second round. When Shevchenko got Andrade back on the ground, she secured a crucifix from top position, pinning Andrade’s shoulders to the canvas. With no way out, the champion unloaded elbows until referee Dan Miragliotta stepped in. Ever since winning the title, Shevchenko has dominated her division with six successful defenses. Shevchenko will return to defend her title at UFC 275 against Tailia Santos. 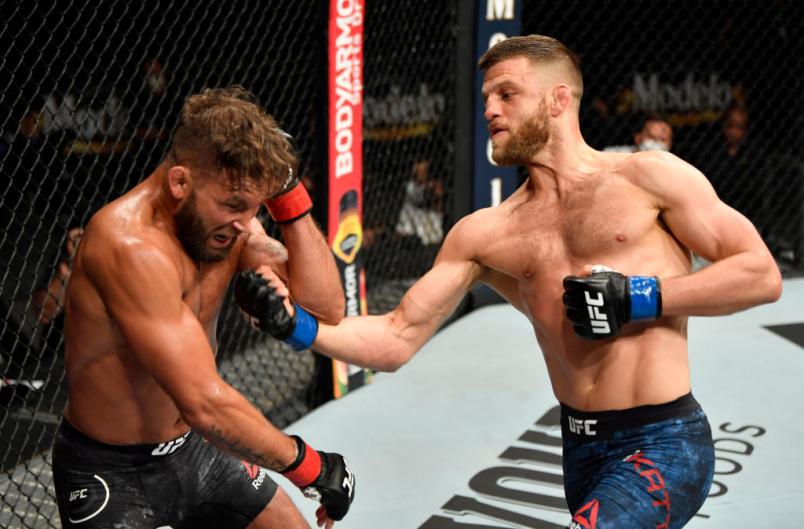 Calvin Kattar punches Jeremy Stephens in their featherweight fight during the UFC 249 event at VyStar Veterans Memorial Arena on May 09, 2020 in Jacksonville, Florida. (Photo by Jeff Bottari/Zuffa LLC)

At UFC 249, rising featherweight contender Calvin Kattar took on Jeremy Stephens in an epic clash. Kattar was known for his boxing, and Stephens for his power and grit, so this fight had all the makings to steal the show.

It was evident early on in the bout that the game plan of Stephens was to attack the legs of Kattar. As for Kattar, he took his time finding his range, landing clean combinations on “Lil’ Heathen”. Stephens continued to land heavy leg kicks, taking advantage of Kattar’s slow starting pace. Once Kattar found his groove, he would respond to Stephens’ hard kicks with combinations of his own.

With no intention to take the action to the ground from either man, the two were relentless with their striking. Kattar would catch Stephens with a fast and clean elbow that landed flush on the jaw. Following up with the left elbow on the ground, Stephens was dazed and cut. Kattar got that signature win he was looking for, sending a message to his division that he was a real contender for the title.