The Best Of Kelvin Gastelum

Relive Some Of Kelvin Gastelum's Greatest Moments As We Gear Up For UFC Fight Night: Cannonier vs Gastelum
By E. Spencer Kyte, on Twitter @SpencerKyte • Aug. 16, 2021

Kelvin Gastelum is in his ninth year on the UFC roster and doesn’t turn 30 until later this fall.

Those are two truths that feel incongruous, improbable — that an athlete can log eight full years competing on the biggest stage in the sport, make the walk to the Octagon 19 times, headline six fight cards, and challenge for championship gold all before he’s spent three decades on Earth — and here we are, a handful of days away from the 29-year-old’s 20th UFC appearance and seventh headlining turn.

Next weekend, Gastelum steps in to face Jared Cannonier in the main event of the latest fight card to emanate from the UFC APEX, filling in for Brazilian Paulo Costa, jumping at the chance to do so after coming up short under similar circumstances earlier in the year against Robert Whittaker. 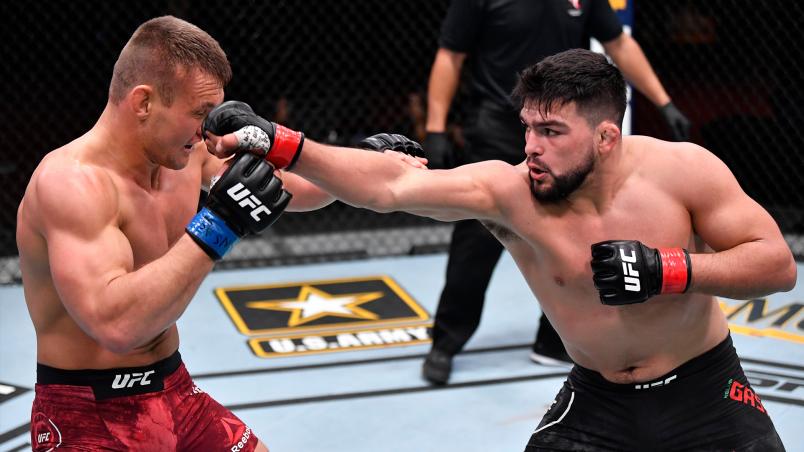 While there will be time later in the week to preview the contest and put where the Kings MMA representative currently resides in the middleweight division and his career as a whole into greater context, today is a chance to celebrate the best moments the long-tenured contender has enjoyed inside the UFC cage.

Here’s a closer look at five of Kelvin Gastelum’s top performances inside the Octagon.

Gastelum walked into the competition on Season 17 of The Ultimate Fighter as a bundle of raw potential and carved out a Cinderella run to winning the whole thing, going from being the final pick of Team Sonnen (though not the last man standing when teams were being chosen; that was Dylan Andrews) to winning the finale.

The fact that he beat Hall was poetic, as well, as the Queens, New York product was the runaway favorite to win the whole thing almost immediately — a powerful striker that registered some of the most hellacious finishes in the show’s history on his way to the final pairing. It wasn’t quite David versus Goliath, but it was the guy everyone expected to be there taking on the kid no one saw coming, and for 15 minutes in the middle of April, Gastelum and Hall got after one another.

Gastelum earned the split decision victory — his wrestling and overall activity the likely deciding factors — becoming the youngest Ultimate Fighter winner ever and an instant blue-chip talent to track once he transitioned onto the UFC roster.

But the coolest thing about his time on the show and his pairing with Hall in the finale is easily that the two have been best friends ever since, having lived together and trained together in the past, while remaining extremely close all these years later.

After edging out Hall in the TUF 17 Finale, Gastelum dropped to welterweight and collected three straight wins, submitting Brian Melancon before landing on the happy side of the scorecards against Rick Story and Nico Musoke. It was clear he was a prospect on the rise and someone with a bright future, but it was time to figure exactly where he stood in the loaded welterweight division. 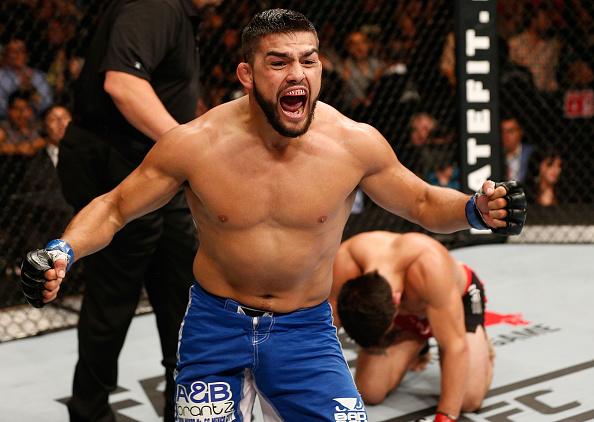 Kelvin Gastelum celebrates after his submission victory over Jake Ellenberger in their welterweight fight during the UFC 180 event at the Arena Ciudad de Mexico on November 15, 2014 in Mexico City, Mexico. (Photo by Josh Hedges/Zuffa LLC/Zuffa LLC via Get

“The Juggernaut” may have been on a two-fight skid at the time, but those losses came against Rory MacDonald and Robbie Lawler, elite contenders, and with nearly 40 fights under his belt, he was easily the most experienced and savvy foe that Gastelum had ever faced. This was the litmus test every youngster must pass on his or her journey towards contention, and the recent TUF winner couldn’t have done much better than he did in Mexico City.

Ellenberger had been beaten a handful of times in the past, but no one had gotten him out of there in the first round — not Jay Hieron when he was just starting out, not Story or Carlos Condit or Martin Kampmann, and not MacDonald or Lawler either.

But Gastelum was overwhelming, showing up in tremendous shape and sniping at the veteran from range to start, mixing up his strikes, landing combinations. He ate whatever Ellenberger landed in return and kept moving forward — attacking, pressing, probing.

Midway through the frame, Gastelum scooped Ellenberger up and deposited him on the canvas, settling into top position and resuming his attack. Elbows rained down, and Ellenberger scrambled to his feet, only to get hit with a one-two that backed him up. In a scramble off an Ellenberger takedown attempt, Gastelum scurried to his opponent’s back, pistoning right hands into the side of Ellenberger’s head, softening him up, creating an opening. 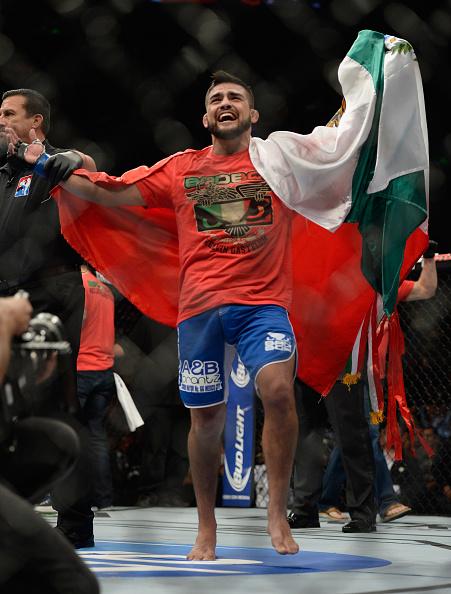 Kelvin Gastelum celebrates after defeating Jake Ellenberger by holding a Mexican flag after their welterweight bout during the UFC 180 event at Arena Ciudad de Mexico on November 15, 2014 in Mexico City, Mexico. (Photo by Jeff Bottari/Zuffa LLC)

When the veteran looked to stand, he left his neck exposed for a millisecond and Gastelum pounced, sinking in the rear-naked choke before Ellenberger had any chance to defend.

Beating a veteran like Ellenberger was one of the early checklist items every aspiring contender needs to accomplish on their way to the top, and taking out a former world champion is another major milestone on that list.

Two fights and 18 months removed from sitting atop the welterweight division, Hendricks entered this preliminary card pairing at the UFC’s massive International Fight Week pay-per-view eager to get things moving in the right direction again, but Gastelum had other plans.

Like Hendricks, the former Ultimate Fighter winner was coming off a loss and facing questions about his place in the division after missing the welterweight limit and being dispatched to middleweight a couple fights prior. After making weight and landing on the wrong side of the split in a competitive, entertaining affair with Neil Magny the previous November, Gastelum turned up in Las Vegas looking to make a statement and did, beating Hendricks, who missed weight by a quarter of a pound, from start to finish to secure the biggest win of his career.

While revisionist history buffs would likely frame this from the perspective of Hendricks’ fall from grace, this was a massive accomplishment for Gastelum at the time, as only four men had previously bested the Oklahoma State Cowboy standout inside the Octagon, including a pair of champions, a perennial contender who is still in the Top 10 today, and a gritty veteran from the Pacific Northwest. 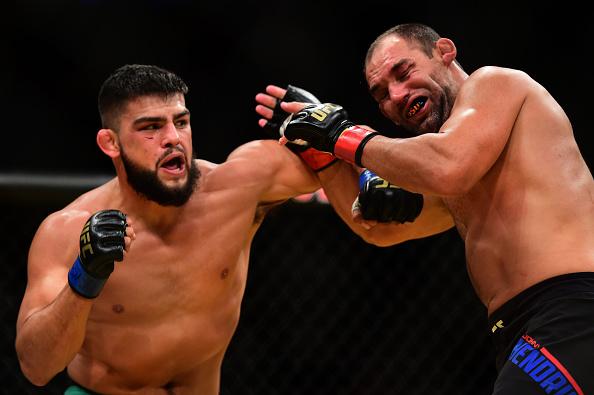 Although he’d been inconsistent since reaching the Top 10 and struggled in his battle with the scale, this was another glimpse at how good Gastelum could be on his better days, and a reminder that there were still even higher levels he could reach if he got everything dialed in.

Exactly 21 days after dropping the middleweight title to Georges St-Pierre at UFC 217 in New York City, Michael Bisping walked out to the Octagon in Shanghai, China, the familiar strains of “Song 2” pumping throughout the venue as “The Count” looked to get back into the win column and re-affirm his standing as one of the middleweight elites.

Bisping was filling in for Anderson Silva and had to feel like he was catching Gastelum at a good time as the Rafael Cordeiro protégé was coming off a third-round submission loss to Chris Weidman. Surely the combustible Brit saw it as a way to quickly get the sour taste of losing his title out of his mouth, but unfortunately for Bisping, Gastelum saw it as a chance to make a statement of his own

They ran fairly level through the opening two minutes, but then right before midway point of the round — KA-POW! Gastelum uncorked a clean one-two that landed quick and landed hard, spinning Bisping to the canvas in a heap. The follow-up blows were academic as Marc Goddard rushed in to halt the fight, prompting Gastelum to erupt in celebration.

The overhead slow-motion replay showed how beautiful and precise the combination was, Gastelum leaning out of the way of a right hand, directing Bisping back into his power hand with a pawing right, and twisting his jaw with a rocket-fueled left behind it.

This was a statement win for Gastelum and nearly four years later, it might still be the best winning performance of his career. 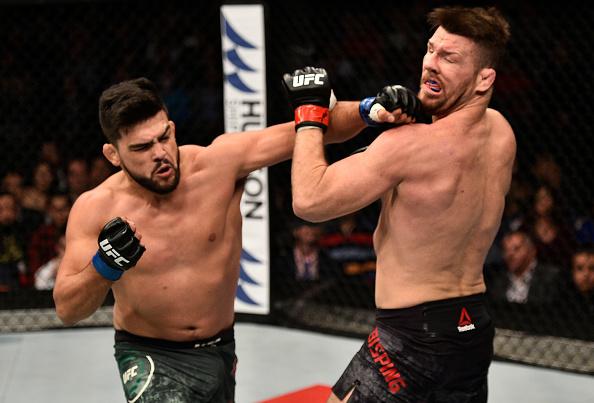 Kelvin Gastelum punches Michael Bisping of England in their middleweight bout during the UFC Fight Night event inside the Mercedes-Benz Arena on November 25, 2017 in Shanghai, China. (Photo by Brandon Magnus/Zuffa LLC via Getty Images)

It’s important to clarify that his effort against Bisping was his best effort in a contest where he was victorious, because Gastelum’s best performance full stop came in his UFC 236 loss to Israel Adesanya.

This was an instant classic — a compelling, ultra-competitive clash for the interim title in the main event of UFC 236, with Gastelum standing opposite the unbeaten, swaggering Adesanya, unfazed by his aura and focused on claiming championship gold.

Gastelum won the opening round on all three scorecards, and then Adesanya won the second and third, giving the fight the feel of a contest where momentum had been seized and was going to be held captive by “The Last Stylebender.” But in the fourth round, Gastelum showed his championship mettle and tenacity, rallying and rocking the dynamic City Kickboxing representative, snatching back the momentum as the two sides readied for a winner-take-all final stanza.

In the fifth, Adesanya one-upped Gastelum, reclaiming the momentum and ultimately the decision in dramatic fashion, taking the fight to Gastelum over the second half of the round, dropping him multiple times and nearly securing the finish before ultimately claiming a unanimous decision victory.

This was one of those instances where despite landing on the wrong side of the result, Gastelum’s stock still went up, as he showed he has what it takes to hang with the absolute best in the division. It remains the pinnacle of his career to date, and a reminder of what the soon-to-be 30-year-old can do any night he steps into the Octagon.