The Best Of Jared Cannonier

“The Killa Gorilla” Has Wreaked Havoc Across 3 Divisions In The UFC.
By E. Spencer Kyte, on Twitter @SpencerKyte • Aug. 13, 2021

Jared Cannonier is part of an exclusive club, as the list of fighters to earn victories in three different UFC weight classes isn’t particularly long, though it is largely a collection of highly accomplished individuals.

Diego Sanchez and Kenny Florian each fought in four divisions and registered victories in three — Sanchez besting Florian in the middleweight finale on the inaugural season of The Ultimate Fighter before enjoying the majority of his success between welterweight and lightweight, with a one-off trip to featherweight dropped in there, while Florian followed a similar path down in weight while registering wins at each stop after losing to Sanchez.

Vitor Belfort won the heavyweight tournament at UFC 12, claimed light heavyweight gold some years later, and returned to championship contention at middleweight during his third act with the organization, while former champions Frankie Edgar, Conor McGregor, and Anthony Pettis have all posted wins across three divisions as well.

One of the more obscure names to achieve the feat also might have the most interesting collection of wins from the pack, as Brazilian Lucas Martins scored victories at lightweight, bantamweight, and then featherweight in back-to-back-to-back appearances over a 14-months stretch, securing finishes in each fight.

Now settled at middleweight, Cannonier returns to action this weekend in a showdown with Kelvin Gastelum, looking to get back into the win column and re-affirm his standing as an elite contender in the 185-pound ranks.

Before getting to Saturday’s clash, let’s take a walk down Memory Lane and re-live how Cannonier joined the “Three Division Club” with a look at his Top 5 performances inside the Octagon. 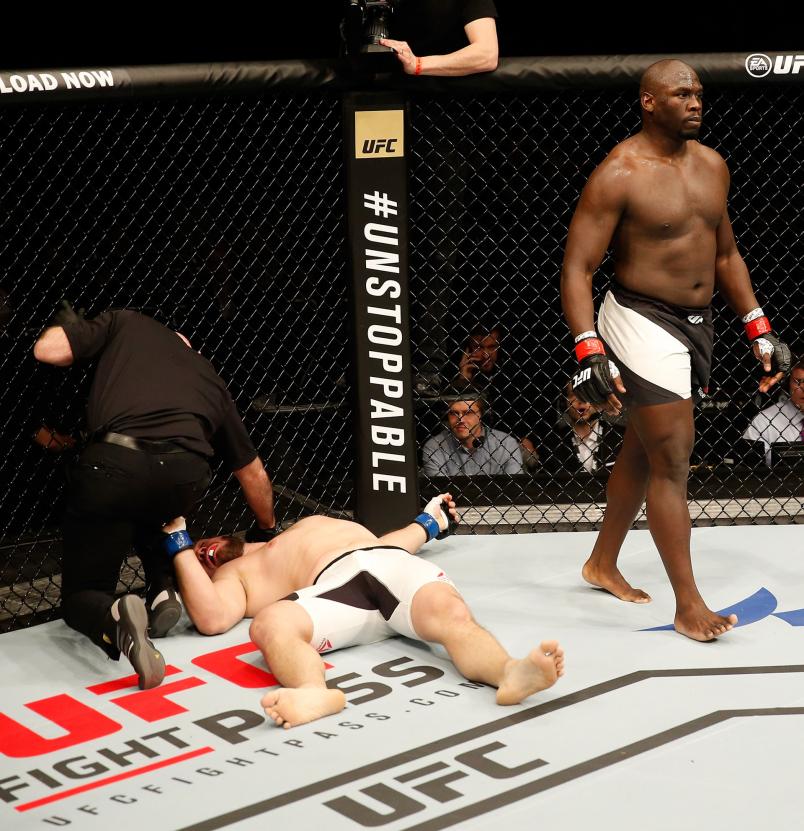 Jared Cannonier knocks outs Cyril Asker in the first round in their heavyweight bout during the UFC Fight Night event at the Arena Zagreb on April 10, 2016 in Zagreb, Croatia. (Photo by Srdjan Stevanovic/Zuffa LLC)

Cannonier’s first UFC victory came at heavyweight against Asker in Zagreb, Croatia, more than a year after he lost his debut to Shawn Jordan.

It’s honestly a little weird to go back and watch the fight again because Cannonier just looks so different, both physically and in the way he fights — he’s heavier on his feet, the speed is solid for a big fella, but nothing like what we’ve seen since, and he’s still sporting a shaved head; it’s like watching a heavyweight “Create-A-Fighter” version of Jared Cannonier compete on UFC 4.

What isn’t different, however, is the variety of strikes he throws and the fact that he can crack because over the course of the nearly three-minute fight, Cannonier hits Asker with an assortment of kicks to different levels and a collection of different punches, dropping his French foe with an advance overhand left and sealing the deal with a stream of unanswered thunder-smashes on the canvas.

This was Cannonier’s final heavyweight appearance, and he left the division on an impressive note, beginning his “Incredible Shrinking Man” journey on the heels of an absolute blistering finish. 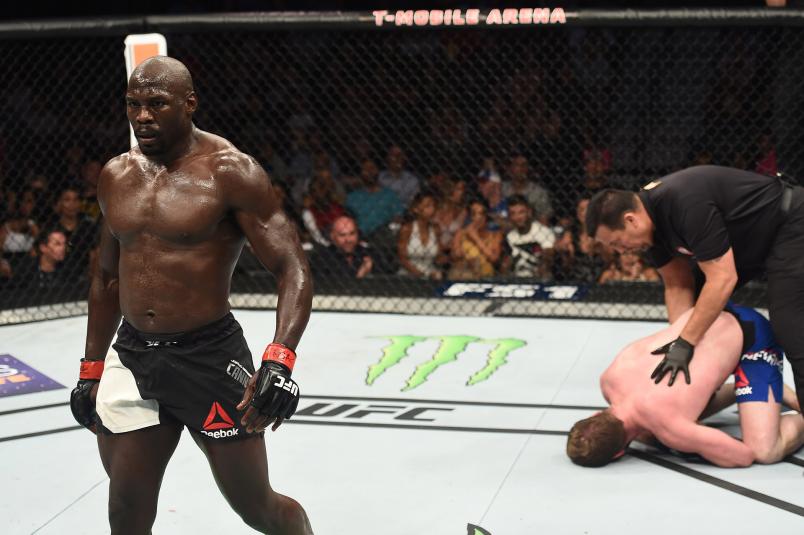 Jared Cannonier celebrates after his knockout victory over Nick Roehrick in their light heavyweight bout during The Ultimate Fighter Finale at T-Mobile Arena on July 7, 2017 in Las Vegas, Nevada. (Photo by Brandon Magnus/Zuffa LLC)

Jared Cannonier celebrates after his knockout victory over Nick Roehrick in their light heavyweight bout during The Ultimate Fighter Finale at T-Mobile Arena on July 7, 2017 in Las Vegas, Nevada. (Photo by Brandon Magnus/Zuffa LLC)

“Tha Killa Gorilla” made five appearances in the light heavyweight division, alternating wins and losses through his first four outings before Dominick Reyes handed him a tie-breaking first-round stoppage loss in his final appearance in the 205-pound weight class.

Just like his time at heavyweight, Cannonier’s final victory in the light heavyweight ranks was a scorcher as he worked over Roehrick, who took the fight on short notice, through the first two rounds before getting him out of there with a string of attacks, beginning with a head kick, followed by a knee from the Thai clinch and a torrent of elbows from top position after dumping him to the canvas in a heap.

While his time at light heavyweight featured more setbacks and celebrations, those losses actually foretold his potential for success down at middleweight, as the three men to beat him in the 205-pound division were Reyes, current champ Jan Blachowicz, and the next man to challenge for the title, Glover Teixeira.

This was such an intriguing fight on paper heading into the UFC’s annual trip to NYC, as Cannonier was moving down to middleweight for the first time and Branch was coming in off a first-round knockout win over Thiago “Marreta” Santos a little more than six months earlier, sporting a 12-1 record over his previous 13 fights.

Physically, Cannonier looked great — fighting at 185 pounds looked like a natural fit for his frame, and he moved and attacked with speed and fluidity, plus he’d grown out the small Afro he sports now, which made the former heavyweight look younger as well.

Branch dominated the first round with his grappling, taking Cannonier down a couple different times, searching for submissions, softening him up with punches, and generally controlling the action through the opening five minutes; the threat of the takedown keeping Cannonier off balance.

Cannonier came out of the corner aggressively to start the second, chopping at Branch’s lead leg with a heavy kick, slinging heavy leather, and when Branch straightened up after a half-hearted takedown attempt, the middleweight newcomer clocked him with a right hand that sent him stumbling backwards and tumbling to the canvas. Cannonier pounced and pounded out the finish, bombing away with unanswered right hands along the fence.

This was a statement win in a new weight class — a second-round stoppage victory over a Top 15 talent whose only loss in the previous 13 fights came against former champ Luke Rockhold, and it put Cannonier on the map as a potential factor in the middleweight division. 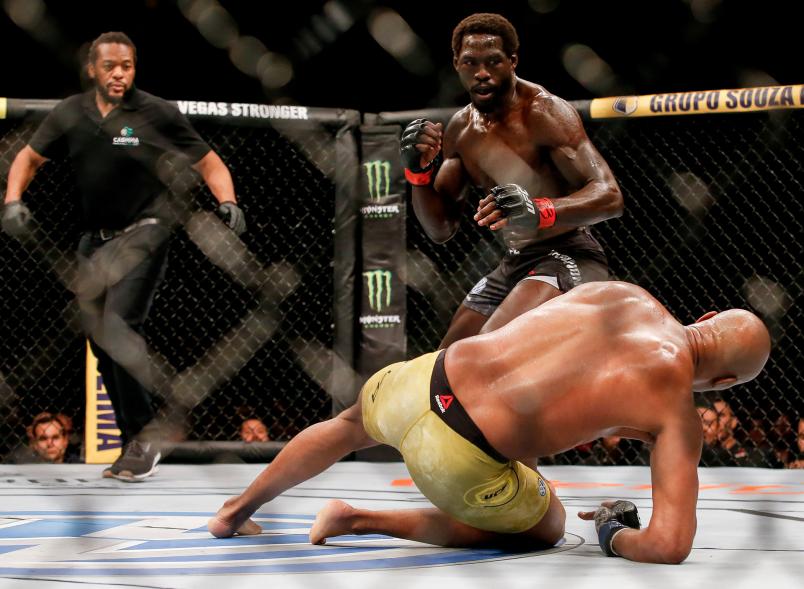 Paired off with long-time divisional ruler Anderson Silva in Rio de Janeiro, Brazil for his sophomore showing in the 185-pound weight class, Cannonier secured an even more impressive victory than he had in his divisional debut.

While some will likely want to argue that the bout was halted as a result of a Silva injury, the truth of the matter is that Cannonier attacked the Brazilian icon’s lead leg right out of the chute and never let up. He landed his first leg kick seven seconds into the bout, landing to the outside of Silva’s lead leg. He landed a heavy kick to the inside of that leg about 30 seconds later, and never stopped targeting the area, continuing to work both sides until he finally felled Silva late in the round.

It was an impressive, patient performance that highlighted his growth as a fighter and his continued emergence as a contender. Silva’s signature feints didn’t bother him, nor was he hesitant because he was standing across from “The Spider” — he was the aggressor, the more active striker, and showcased the diverse striking arsenal and clear power that has made him a threat to this day.

The sight of seeing a legend like Silva writhing in pain on the canvas is imprinted on everyone’s memory, but this wasn’t a fluke injury situation that brought the fight to an abrupt halt — Cannonier had attacked Silva’s lead leg throughout and spun the Brazilian to the canvas with one final thudding blow, securing his second straight stoppage win at middleweight to announce his presence as a potential problem in the 185-pound weight class.

Cannonier has been a bit of a road warrior over the course of his UFC career, fighting in seven different countries in 11 appearances, including a third straight turn as the visiting squad when he squared off with Hermansson in Copenhagen a little under two years ago.

Born in Sweden and fighting out of Oslo, Norway, Hermansson had the crowd behind him and entered as the betting favorite while being stationed four spots ahead of Cannonier in the rankings. Bolstered by the vocal support, “The Joker” came out quickly, attacking with kicks and dragging Cannonier into a grappling match, hitting a belly-to-back suplex in the center of the Octagon just over a minute into the contest.

But as the round progressed, Cannonier found his footing, attacking with the same heavy kicks that chopped down Silva, doing a much better job of keeping the fight standing and turning up his pace while Hermansson clearly slowed.

Hermansson tried to start the second with more urgency, but was quickly thwarted by Cannonier, who toppled him with a short, cheeky uppercut on a telegraphed level change and never let him back up. Heavy ground-and-pound rained down and all Hermansson could do was cover up, prompting referee Marc Goddard to halt the action, handing Cannonier his third stoppage victory in as many middleweight appearances, establishing him as a serious threat in the process.