Relive Some Of Drew Dober’s Career Defining Moments On UFC FIGHT PASS Ahead Of His UFC Fight Night: Cannonier vs Strickland Bout Against Bobby Green
By Kevin E. Schuster, @KevinESchuster On Twitter • Dec. 13, 2022

The lightweight division has always been regarded as one of the deepest in the UFC, with elite level talent still sitting outside of the 155-pound Top 15.

One of those fighters is Drew Dober, who’s on the brink of entering the lightweight rankings. With his last two losses coming to current lightweight champion Islam Makhachev and in a Fight of the Night performance against Brad Riddell, Dober’s collected back-to-back finishes in 2022.

Dober can go a perfect 3-0 this calendar year at UFC Fight Night: Cannonier vs Strickland, when he faces Bobby Green on the last card before the UFC’s brief winter hiatus. But before he takes on “King”, revisit some of these memorable moments from Dober’s career on UFC FIGHT PASS:

Dober KOs Haqparast Early In Round 1 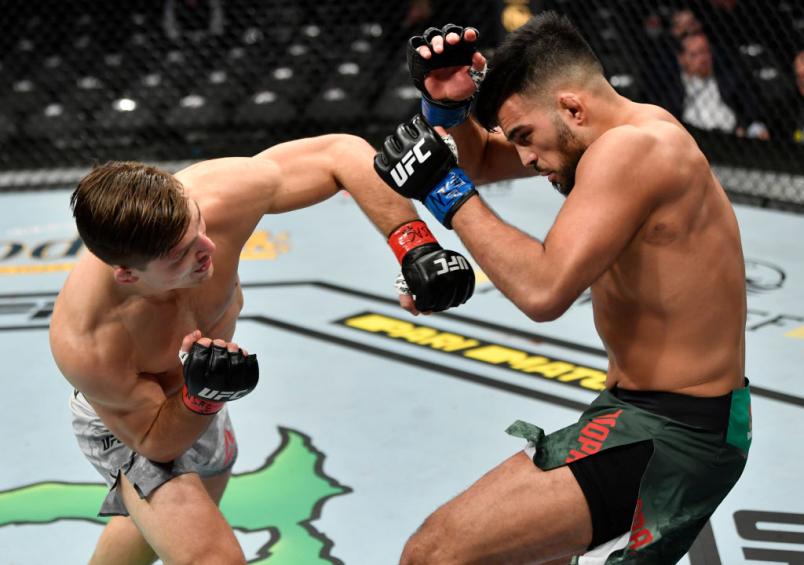 Drew Dober punches Nasrat Haqparast of Germany in their lightweight fight during the UFC 246 event at T-Mobile Arena on January 18, 2020 in Las Vegas, Nevada. (Photo by Jeff Bottari/Zuffa LLC)

There was no feeling out process when Drew Dober met Nasrat Haqparast at T-Mobile Arena. Just over 10 seconds into the bout, Dober connected with his first punch of the night, which appeared to already stagger Haqparast briefly.

In retaliation, Haqparast started firing back, throwing himself to the ground after missing a haymaker. But in the fire, when technique gets thrown out the window, Dober thrives. Always staying composed, even in the heat of battle, Dober relies on his technique and power to deliver when his opponents get too overzealous, and that’s what happened here.

Just over a minute into the opening round, Dober landed a perfect left hook that sent Haqparast to the mat. Quickly jumping on him to regain control, Dober landed heavy ground-and-pound strikes until the referee stepped in to stop the fight. It was his cleanest performance to date, and a perfect example of what could happen if you try and stand toe-to-toe in the Octagon with him. 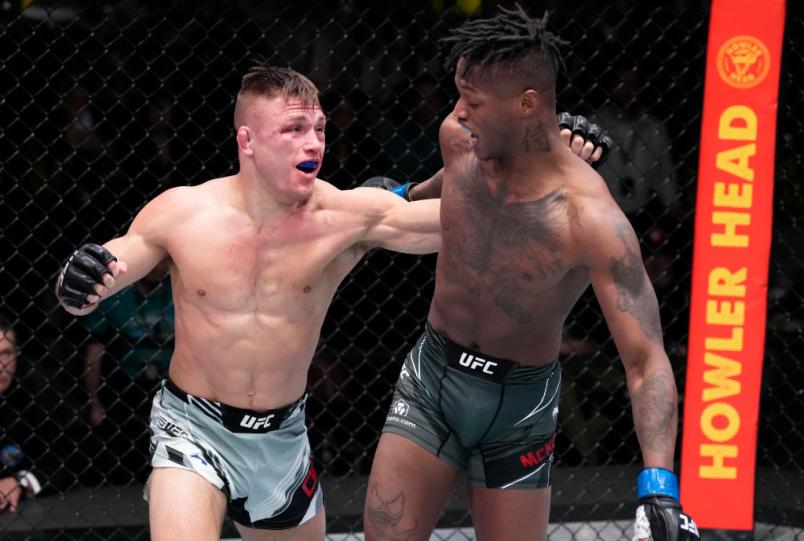 Coming into his fight with Terrance McKinney, “T.Wrecks” was riding a five-fight win streak that saw five first-round finishes, including a seven-second one-punch KO against Matt Frevola in his UFC debut. So, it was safe to assume that he’d be coming out guns blazing against Dober.

Under 10 seconds into the bout, McKinney already recorded a knockdown, landing a jumping knee and two hooks in quick succession. Dober did well to recover, even welcoming the knockdown with a smile and a few punches as he got back to his feet. Then the tide started to turn.

Dober pushed McKinney up against the fence and started to tee off, instantly leaving visible damage on McKinney’s face. As “T.Wrecks” was trying to break away, Dober landed a picture-perfect knee, dropping McKinney. Several unreturned ground-and-pound shots later and no-nonsense referee Keith Peterson was forced to step in and stop the bout. After nearly being finished in 10 seconds, Dober showed just how tough and resilient he can be in the Octagon. 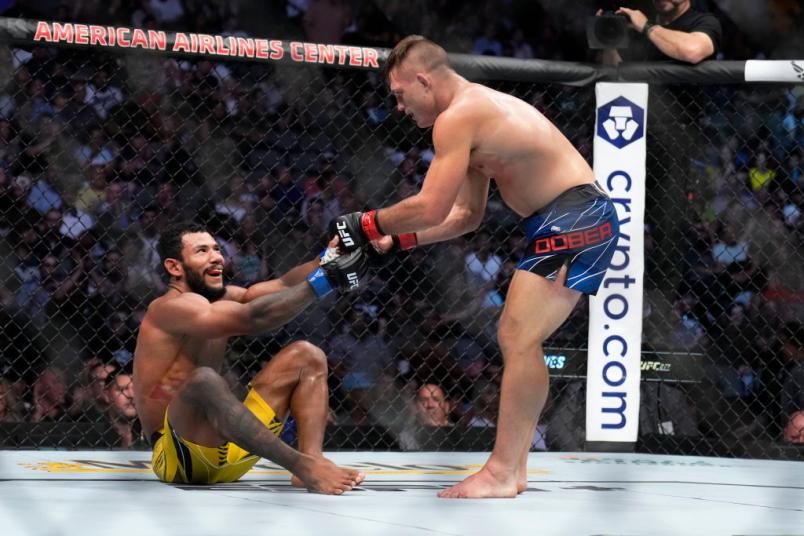 Drew Dober helps Rafael Alves of Brazil up after the second round in a lightweight fight during the UFC 277 event at American Airlines Center on July 30, 2022 in Dallas, Texas. (Photo by Chris Unger/Zuffa LLC)

In his latest bout, Dober faced an explosive Rafael Alves, who brings the same speed as McKinney, but with a few more tools. Opening the fight with a capoeira-style kick, Alves showed Dober techniques that he’d never seen before inside the Octagon.

But this didn’t bother him one bit. Despite an initial onslaught of speed and power, Dober weathered the storm and waited for Alves to lose some steam before taking over the fight. By the end of the first round and all the second, Dober was on the front foot, leading the dance. Always striking first, Dober landed most of his strikes without receiving anything in return.

In the second round, Dober targeted the body once he noticed Alves was slowing down. However, an eye poke allowed Alves to recover a lot of his energy to go all-out in the final seconds of the round, a sequence that included Alves swiftly evading strikes then hitting the Robot.

Entering the third, Dober stuck with the same plan: target the body. This time, it only took one perfect left hook to the body to send Alves to the mat and close the show.