Best of a Nation: Japan 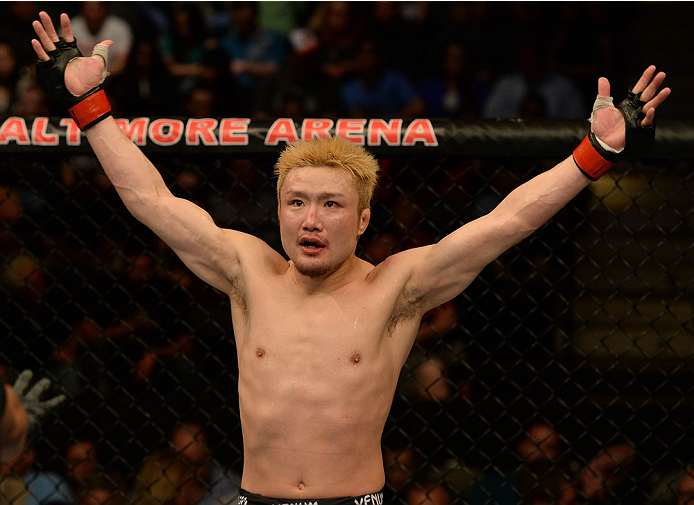 The UFC returns to Japan next week for UFC Fight Night: Barnett vs. Nelson at Saitama Super Arena. The Japanese contingent will be well-represented on the card, and each of those local heroes competing at home will be looking to take the next step toward Octagon immortality. So who are the top fighters from the Land of the Rising Sun to compete in the UFC? Here are 20 of the best.

Yoshihiro Akiyama - Osaka
A skilled judo black belt who has no qualms about standing and trading with anyone, Yoshihiro Akiyama made his UFC debut to much fanfare in 2009, and he didn’t disappoint as he decisioned Alan Belcher over three exciting rounds. The bout earned Akiyama Fight of the Night honors, and he went on to win the award in his next two bouts as well, tough losses against Chris Leben and Michael Bisping. After a KO loss to Vitor Belfort, Akiyama dropped down to 170 pounds, where he has since lost a decision to Jake Shields and outpointed Amir Sadollah.

Ryo Chonan – Yamagata City
You wouldn’t know it by walking around Tokyo, but many of the buildings in the Japanese city bear the fingerprints of former construction worker Ryo Chonan. Similarly, you wouldn’t know how good a fighter Chonan is by looking at his UFC record, but fans who followed him during his time in the PRIDE and DEEP organizations know that he has earned his place in MMA lore. One of the few fighters to defeat and finish Anderson Silva, Chonan did it in their 2004 PRIDE bout with one of the greatest submissions ever – a flying scissor heel hook. Chonan also defeated Carlos Newton and Hayato Sakurai, but never seemed to catch a rhythm in his four-fight UFC stint.

Takanori Gomi - Kanagawa
The only man to hold the PRIDE lightweight title, Takanori Gomi ruled the Japanese organization with an iron fist, going 13-1 with 1 NC from 2004 to 2007. In 2010, he arrived in the Octagon, and he struggled in losses to Kenny Florian, Clay Guida, and Nate Diaz, he showed off that “Fireball Kid” style with impressive knockouts of Tyson Griffin and Eiji Mitsuoka. The Japanese icon has only gone 2-3 in his next five UFC bouts, but the 36-year-old hopes to get back in the win column soon.

Akihiro Gono - Saitama
Charismatic Akihiro Gono made his debut in mixed martial arts in 1994, compiling over 30 wins. Along the way, he faced a Who’s Who of the sport from welterweight to light heavyweight (such as former UFC champions Matt Hughes and Mauricio “Shogun” Rua, UFC and PRIDE vet Yuki Kondo, and two division PRIDE champion Dan Henderson), while making a name for himself in the PRIDE, Pancrase, and Shooto organizations for his aggressive style and well-rounded attack, not to mention his memorable ring entrances. In the UFC, Gono’s resume included a win over Tamdan McCrory in his UFC debut in November of 2007 and hard-fought decision losses against Dan Hardy and Jon Fitch.

Hatsu Hioki - Nagoya
Former Shooto and Sengoku champion Hatsu Hioki dominated the Japanese scene in 2007-2011, going 12-1-1 while establishing himself as one of the top featherweights in the sport. But in late-2011, he decided it was time for him to hunt down some bigger game, and in October of that year, he made his UFC debut with a win against ultra-tough George Roop. It wasn’t the most impressive performance, but Hioki made up for it with his victory over Bart Palaszewski. Since then it’s been a rough go for the submission ace, who went 1-5 in his next six.

Kyoji Horiguchi – Tokyo
He may have lost his first UFC title fight to Demetrious Johnson in April, but a lot of top-notch flyweights share that distinction with power-punching Kyoji Horiguchi, a protégé of Kid Yamamoto who won his first four UFC bouts to earn that shot at the 125-pound belt. Horiguchi returns to action next week against Chico Camus.

Tatsuya Kawajiri – Ibaraki
Tatsuya Kawajiri fought and excelled in all the major promotions in Japan, and whether it was Shooto, PRIDE or Dream, the “Crusher” always brought the heat on fight night. A fearless competitor who took on the likes of Caol Uno, Yves Edwards, Eddie Alvarez, Gilbert Melendez, Shinya Aoki, Joachim Hansen and Josh Thomson BEFORE coming to the UFC in 2014, Kawajiri is 2-1 thus far in the Octagon, with wins over Sean Soriano and Dennis Siver on his resume as he awaits a December bout with Mirsad Bektic.

Sanae Kikuta – Tokyo
Longtime Pancrase star Sanae Kikuta was another one of those “What If” stories, as he only competed once in the Octagon, submitting Eugene Jackson at UFC 25 in 2000. A top-level talent, Kikuta made his name by fighting all comers, including Renzo Gracie, Murilo Bustamante, Ikuhisa Minowa, Yuki Kondo, Elvis Sinosic, Minotauro Nogueira, and Hidehiko Yoshida.

Yuki Kondo – Niigata
A 1-2 UFC record really doesn’t tell the whole story when it comes to the nearly two decade-long career of Yuki Kondo. In fact, his UFC 27 win over Alexandre Dantas and Octagon losses to Tito Ortiz and Vladimir Matyushenko barely touch the surface when it comes to one of the most underrated fighters of his time. A King of Pancrase who defeated Frank Shamrock, Semmy Schilt, and Guy Mezger, among others, Kondo also starred in PRIDE, where his dance card included Wanderlei Silva, Dan Henderson, and Igor Vovchanchyn. Owner of 58 wins in 97 pro fights, the 40-year-old’s most recent bout was in March, and his impact will always be felt at home, even if he wasn’t able to break out on the UFC scene.

Tsuyoshi Kosaka - Kusatsu
A staple of the UFC’s heavyweight division in the late 90s, Tsuyoshi “TK” Kosaka - like his countryman Yuki Kondo – suffered from being in the Octagon during the organization’s “Dark Ages,” almost guaranteeing that he wouldn’t get the respect he deserved from later generations of fight fans. But for those who never saw him, rest assured that he was the real deal, a courageous fighter with legitimate skills who never backed down. The first man to beat Fedor Emelianenko (albeit controversially via cut), Kosaka was a long time training partner of Maurice Smith and Frank Shamrock, and his UFC resume included wins over Kimo Leopoldo, Pete Williams, and Tim Lacjik. In his final Octagon bout in 2002, he was stopped by Ricco Rodriguez, one of seven PRIDE or UFC champions he faced in his career.

Ikuhisa Minowa – Nagoya
One of MMA’s most popular fighters, the 61-38-8 record of 39-year-old Ikuhisa Minowa should say it all. A one and done UFC fighter who defeated Joe Slick at UFC 25 in 2000, “Minowaman” made his legend in PRIDE, where his dance card included bouts with Wanderlei Silva, Rampage Jackson, Phil Baroni, Ryan Gracie, Gilbert Yvel, Kazushi Sakuraba, Murilo Bustamante, and Mirko Cro Cop.

Dokonjonosuke Mishima – Osaka
Charismatic and talented, Dokonjonosuke Mishima didn’t get any favors in his two UFC bouts, losses to Joe Stevenson and Kenny Florian, but with years of fighting top competition in Japan like Yves Edwards, Marcus Aurelio, and Takanori Gomi, it was no shocker that he was tossed in the deep end of the water immediately.

Takeya Mizugaki - Kanagawa
Takeya Mizugaki, one of Japan’s finest exports, started a new chapter in his mixed martial arts career in the UFC’s new bantamweight division in 2011, when he defeated Reuben Duran and Cole Escovedo, but he may be best remembered by fight fans for his classic WEC title bout against Miguel Angel Torres in 2009, a five round battle for the ages that served as quite an introduction for the exciting 135-pounder. 7-4 in the UFC, Mizugaki can gain Octagon win number eight on September 27 if he defeats George Roop.

Kazuhiro Nakamura – Hiroshima
Judo black belt Kazuhiro Nakamura debuted at PRIDE 25 in 2003 against Rogerio Nogueira, giving you a prime example of the type of competition he was willing to face, and he was a staple in the Japanese organization for years, fighting the likes of Dan Henderson, Murilo Bustamante, Kevin Randleman, Wanderlei Silva, Igor Vovchanchyn, Josh Barnett, and Shogun Rua. 0-2 in the Octagon, with losses to Lyoto Machida and Sokoudjou, Nakamura returned to Japan, where he competed in 15 more bouts before his retirement in late 2014.

Yushin Okami - Kanagawa
The most successful Japanese fighter in UFC history, Yushin Okami was a powerhouse in the Octagon and a tough out for anyone at 185 pounds. Winner of 13 of 18 UFC bouts, including victories over Hector Lombard, Alan Belcher, Nate Marquardt, Mark Munoz, Mike Swick, and Evan Tanner, Okami was one of a select few to defeat Anderson Silva (via disqualification in a non-UFC bout), and while he lost his title fight rematch to Silva in 2011, he won three of his final five UFC matches before being released after a 2013 loss to Jacare Souza.

Kazushi Sakuraba - Akita
Kazushi Sakuraba’s UFC career lasted all of one night, but he was unbeaten with one win and one no contest that night, earning him the Ultimate Japan heavyweight tournament title. It was the rest of Sakuraba’s career that earns him a mention here though, as he became a PRIDE superstar dubbed “The Gracie Hunter” for his wins over four of MMA’s first family, and for becoming a true legend of the game.

Hayato Sakurai - Ibaraki
Like Sakuraba, one night in the UFC wasn’t enough to show just how good Hayato “Mach” Sakurai was. But consider this: the one fight he was brought overseas for, against a prime Matt Hughes, was one many thought he was going to win. He didn’t, but his lone UFC appearance was a mere blip on a career that saw him compete in PRIDE, DEEP, Shooto, and Dream against the likes of Anderson Silva, Nick Diaz, Shinya Aoki, Takanori Gomi, Jens Pulver, Dave Menne, Jake Shields, Frank Trigg, and Caol Uno.

Genki Sudo - Hokkaido
A free spirit in the best sense of the word, Genki Sudo built a stellar reputation among hardcore fans both at home and Japan as a true showman who could still deliver the goods when the bell rang. He even submitted Butterbean in a Japanese show in 2003. That bizarre victory aside, Sudo earned his keep in MMA because he always fought not only to win, but to entertain, something lost on many fighters.  Whether it’s a flying triangle, his quirky movements, or a quick flurry of fight ending blows, Sudo always brought it and, as victories over Royler Gracie, Nate Marquardt, and Mike Brown showed, the Neo-Samurai could always fight at the top levels of the lightweight division as well.

Caol Uno - Kanagawa
A two-time title challenger in the UFC, Caol Uno gave Jens Pulver and BJ Penn fits in those championship fights but was unable to secure the victory and become the first UFC champion from Japan. As for the rest of his two UFC stints, he was able to defeat solid contenders like Yves Edwards and Din Thomas, but the big win always eluded him.

Kid Yamamoto - Kanagawa
A longtime star on the Japanese circuit, Norifumi “Kid” Yamamoto was a pioneering force for the lighter weight classes, and long rumored to be coming to the United States to face the likes of Urijah Faber and Miguel Angel Torres in SuperFights. In 2011, the dream became a reality as he signed with the UFC, but Yamamoto has come up empty in four Octagon bouts against Demetrious Johnson, Darren Uyenoyama, Vaughan Lee and Roman Salazar.