Take a look back at some of the best fights held inside the UFC APEX
By Miguel Navarro III, on Twitter: @migsnavarro15 • Mar. 9, 2022

“UFC APEX is going to be a massive game changer for combat sports and for the UFC.”

After hosting some of the best fights that the Octagon has ever seen, UFC President Dana White’s words couldn’t have been truer. On June 18, 2019, the UFC announced the opening of the UFC APEX. Previously an empty office building across from UFC HQ in Las Vegas, the space would be converted into a small arena that would mainly be intended to serve as a production hub for the fight company.

In unforeseen circumstances just a few months later, the entire world be blindsided by the COVID-19 pandemic in March 2020. As millions were rapidly testing positive for the virus, all large gatherings and sporting events worldwide were cancelled. With the government enforcing a mask and social distance mandate, a sport as physical as mixed martial arts seemed to be dead in the water. 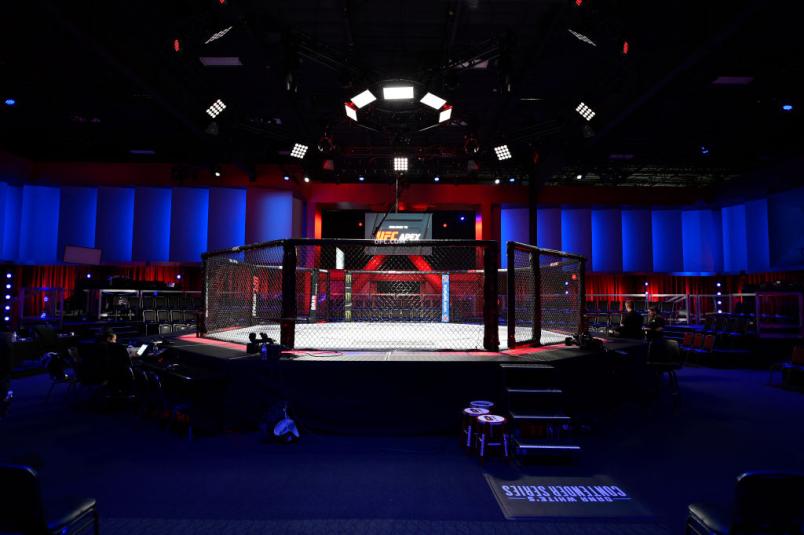 A general view of the Octagon prior to Dana White's Contender Series Week Six at the UFC Apex on July 30, 2019 in Las Vegas, Nevada. (Photo by Chris Unger/DWCS LLC/Zuffa LLC)

As fate would have it, the UFC APEX would be a saving grace, allowing the UFC to host fights while staying in compliance the new COVID-19 regulations. In addition to UFC Fight Island, the UFC APEX would become the primary hosts of UFC events for the foreseeable future. Yet while the UFC was back, this would be the first time in the company’s history where there would be no fans in attendance.

The quiet atmosphere of the UFC AEPEX made fighting seem more daunting at first. There was no adrenaline rush from the crowd and no noise to get lost in. But as time would go on, the smaller Octagon and venue made for a unique atmosphere that produced many unforgettable fights. Let’s take a look back at some of the best fights the UFC APEX has seen. 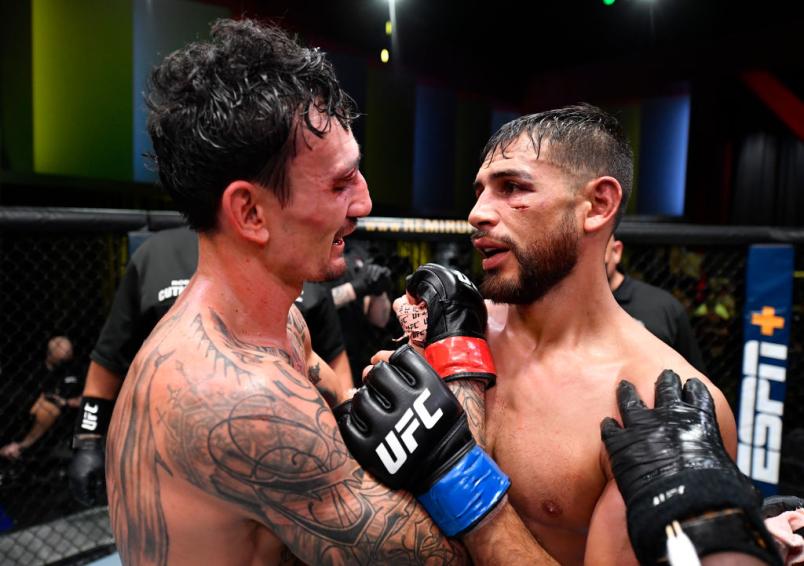 Max Holloway and Yair Rodriguez of Mexico talk after their featherweight fight during the UFC Fight Night event at UFC APEX on November 13, 2021 in Las Vegas, Nevada. (Photo by Chris Unger/Zuffa LLC)

After delivering an unforgettable performance against Calvin Kattar, Max “Blessed” Holloway returned to the Octagon to take on top-ranked contender Yair Rodríguez. It had been over two years since fans had seen Rodríguez compete inside the Octagon, as an ankle injury and suspension had sidelined the Mexican battler. When news broke that Rodríguez would make his return and meet the former featherweight champion, fans knew this had all the makings to be Fight of the Year.

With a big win over Holloway, Rodríguez could easily find himself competing for the UFC featherweight belt. However, the bout against the Hawaiian would undoubtedly be Rodríguez’s biggest challenge thus far.

There was no feeling out process for either man once the fight started. Holloway connected with powerful hooks and straight punches that would snap the head of Rodríguez back. The damage from Holloway’s strikes quicky became evident, as the Hawaiian would give Rodríguez a cut under his left eye before the first round would come to an end. The leg kicks of Rodríguez found their target early, giving the champion some swelling and bruising in front of his lead leg.

While Rodríguez would have his moments throughout the fight, the former champion would always seem to be one step ahead, almost always immediately responding with a combination of his own. On a few occasions through the fight, Rodríguez would land clean shots that would rock the former champion for a split second. The chin of Holloway held up strong, as he was able to eat Rodríguez’s best shots and would continue to press forward.

After delivering a 25-minute classic, Holloway and Rodríguez would be showered with cheers and applause from fans inside the UFC APEX. Holloway’s activity on the feet, combined with five minutes of ground control, would be more than enough in the judges’ eyes, as he won the bout by unanimous decision. 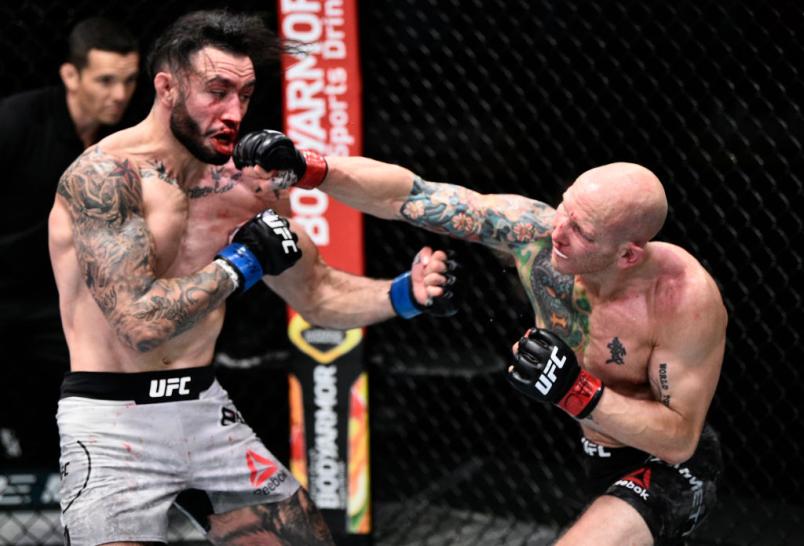 In the co-main event of Fight Night: Blaydes vs Volkov, featherweights Josh Emmett and Shane Burgos were set to collide in an explosive three-round matchup. With Burgos ranked at 10 and Emmett at eight in the 145-pound division, the stakes were high as both men knew they were a few more big wins away from entering the title picture.

Early in the fight, Emmett found success by blitzing past the five-inch reach advantage that Burgos possessed. The sound of Emmett’s punches and Burgos’ leg kicks would echo throughout the UFC APEX.

While Emmett may have been ahead on the judge’s scorecards going into the third round, Burgos was still very much in the fight. The lightning-fast jab of Burgos was the New Yorker’s best weapon during the fight. Emmett, continuing to blitz through the reach, dropped Burgos twice in the third round. Burgos showed grit and heart by quickly recovering each time and making it to the end of the fight. After the activity and two knockdowns, Emmett would defeat Burgos by unanimous decision. 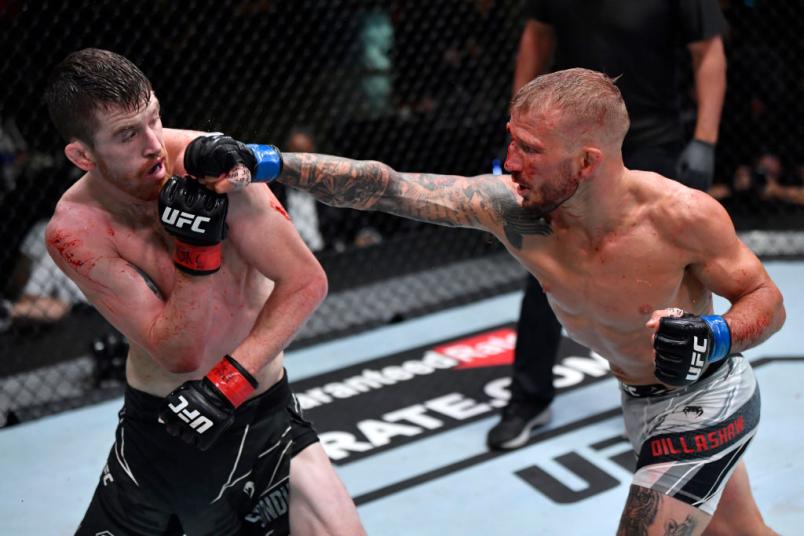 After knocking out Marlon Moraes and former UFC lightweight champion Frankie Edgar in stunning fashion, Sandhagen and Dillashaw were undoubtably fighting for the next title shot.

Sandhagen and Dillashaw would push each other to their limits, battling back and forth for the full 25 minutes. Dillashaw would edge out a split decision win in a fight that really could have gone either way. Regardless, Dillashaw’s defeat of Sandhagen had earned him a chance to reclaim his bantamweight title and challenge the winner of the rematch between champion Sterling and interim titlist Petr Yan. 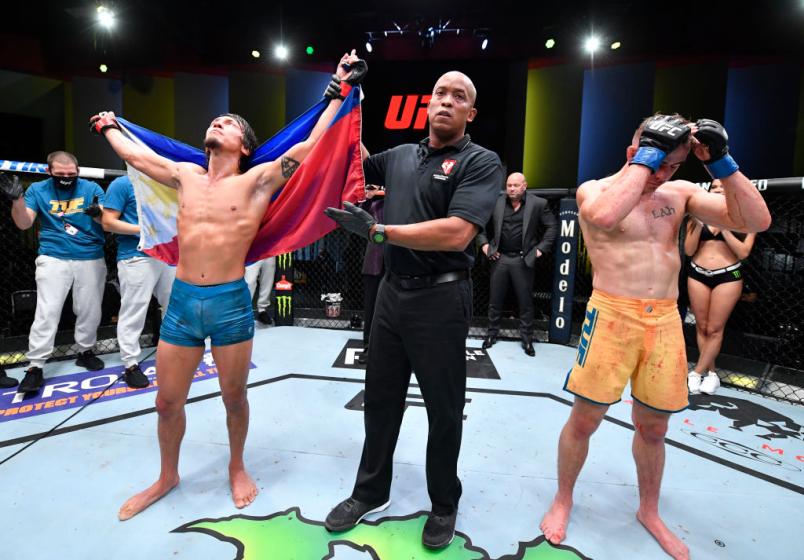 At UFC Vegas 35, bantamweights Ricky Turcios and Brady Hiestand battled it out to decide the winner of The Ultimate Fighter Season 29. Both representing Team Volkanovski, Turcios and Hiestand would give it their all to earn a the six-figure UFC contract.

Early on, Hiestand was able to establish his power and grappling, securing two takedowns against Turcios. Whenever Hiestand would get the fight to the ground, Turcios would respond with jiu-jitsu and threaten an arm triangle multiple times. Turcios even stayed active on his back, blasting hammer fists that would eventually draw blood from Hiestand.

Hiestand would continue to apply the pressure and secure a few more takedowns in the later rounds, but Turcios would quickly rise to his feet or out grapple Hiestand nearly each time. Turcios’ striking found its range and flow in the later rounds, dropping Hiestand with a straight punch in the third round. Turcios wouldn’t be able to finish the job, but he had certainly done enough to earn the nod from the judges. Defeating Hiestand at UFC Vegas 35, Turcios would be crowned as the winner of The Ultimate Fighter Season 29. 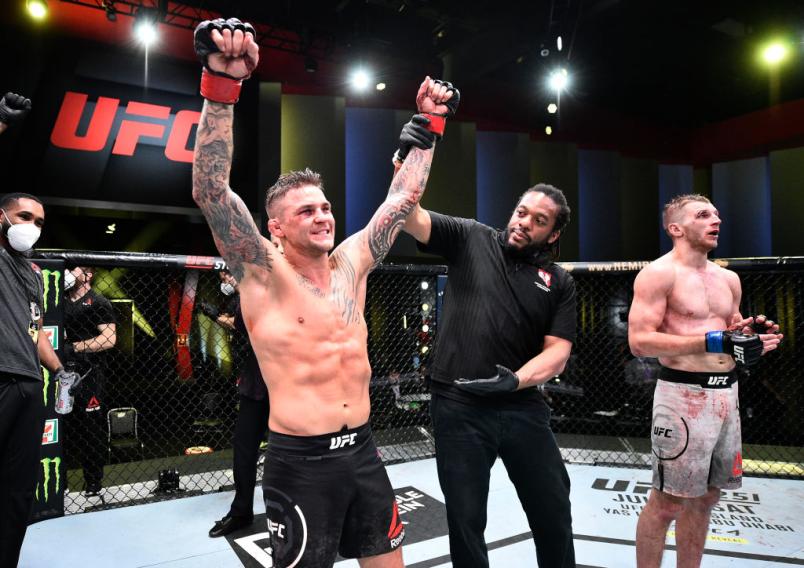 Dustin Poirier celebrates after his victory over Dan Hooker of New Zealand in their lightweight fight during the UFC Fight Night event at UFC APEX on June 27, 2020 in Las Vegas, Nevada. (Photo by Chris Unger/Zuffa LLC)

After falling short against Khabib Nurmagomedov in the summer of 2019 and taking time off for surgery, Dustin Poirier would start his climb back to the top by facing Dan Hooker. Sitting as the fifth ranked lightweight in the division, Poirier would be Hooker’s biggest challenge thus far. Yet after securing three straight wins against James Vick, Al Iaquinta, and Paul Felder, Hooker had a lot of momentum and confidence going into the bout.

With seven wins by knockout, and a three-inch reach advantage over Poirier, Hooker had proven that he had the boxing to hang with “The Diamond.”

Hooker needed no time to shake the nerves, immediately finding his range and connecting with solid shots. Persistent with his leg kicks, Poirier wouldn’t be able to find his rhythm in the first round.

To start the second, Poirier would bite down on the mouthguard and hit Hooker with hard shots. The damage from Poirier’s strikes was evident almost immediately on the face of Hooker, drawing blood from the New Zealander’s nose. As time would go on, the power of Poirier would turn the tide in his favor.

Despite hurting each other multiple times, Poirier and Hooker would fight to the final horn. At the end of the 25-minute classic, Poirier would win by unanimous decision. 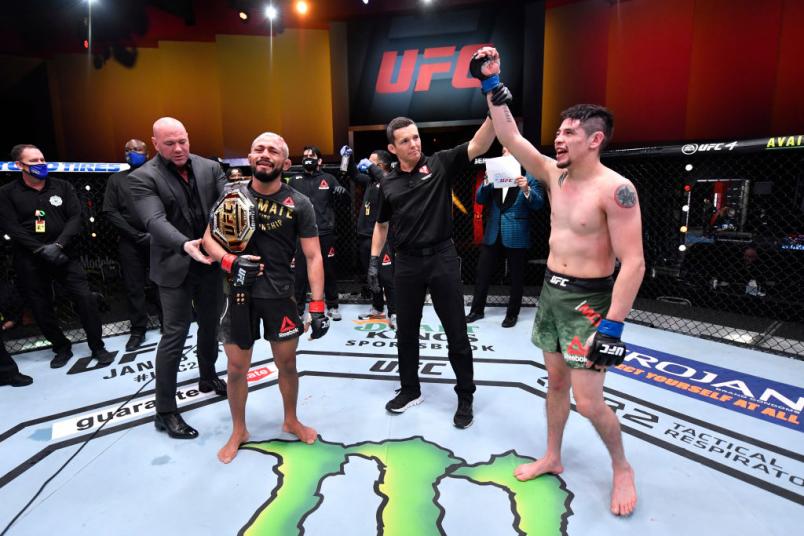 Deiveson Figueiredo of Brazil and Brandon Moreno of Mexico react after their flyweight championship bout was declared a majority draw during the UFC 256 event at UFC APEX on December 12, 2020 in Las Vegas, Nevada. (Photo by Jeff Bottari/Zuffa LLC)

In the main event of UFC 255, UFC flyweight champion Deiveson Figueiredo successfully defended his title against Alex Perez. Perez would be submitted by the champion in just under two minutes of the first round. In the last fight of the prelims for UFC 255, top-ranked flyweight Brandon Moreno would also make quick work of his opponent, finishing Brandon Royval by TKO in the first round.

After defeating Royval, Moreno would call his shot and take aim at the champion. Given that neither man had taken any damage in their recent fights, a bout between the two flyweights felt inevitable. However, that opportunity for Moreno would come much sooner than he probably expected.

Shortly after UFC 255 concluded, Figueiredo would agree to fight Moreno in three weeks, setting the quickest turnaround in UFC history for a champion.

After being cut from the UFC for a brief moment in 2019, Moreno had clawed his way back to the top and the first-round finish over Royval left Moreno as the only viable contender. While more time would’ve been ideal, Moreno was more than ready for his moment and opportunity.

Moreno was able to find his jab against the champion, but Figueiredo proved to have the power. Regardless of the champion’s power, Moreno continued to press forward and land combinations of his own. In the third round, Figueiredo landed an accidental low blow against Moreno that would bring the bout to a brief halt. As a result of the damage and amount of time Moreno needed to recover, referee Jason Herzog would take a point away from the champion.

After recovering from the low blow, Moreno was able to shake off the cobwebs and stay in the fight. The penalty proved to be a crucial turning point in the bout, as it evened out the scorecards of two judges. By the end of the championship bout, Figueiredo and Moreno would end up fighting to a draw. The pair would eventually run it back two more times down the line.