These Are Some Of The Best Fights That Came After Coaching Against One Another On The Ultimate Fighter
By Zac Pacleb, on Twitter @ZacPacleb • Sep. 21, 2021

On September 25, Alexander Volkanovski and Brian Ortega will fight with the featherweight title on the line. The bout comes after the two coached head-to-head on The Return of The Ultimate Fighter and follows a long string of epic matchups set up through the show. Before Volkanovski and Ortega do battle, we took a look at some of the best fights between TUF coaches since the shows inception.

The second bout between “The Iceman” and “The Natural” put a cap on the historic first season of The Ultimate Fighter.

Chuck Liddell got his revenge on Randy Couture in the rematch, finally capturing the UFC title in impressive fashion. The fight got off to a measured start. Liddell seemed content with counter striking and Couture pressed forward, and eventually, Liddell caught the champion with a left hook. Couture tried to answer with a flurry of his own, but Liddell evaded, got some distance and planted a right hand on Couture’s chin that sent him crashing to the canvas midway through the first round. The two would go on to fight one more time, and Liddell would win the rubber match in similar fashion. 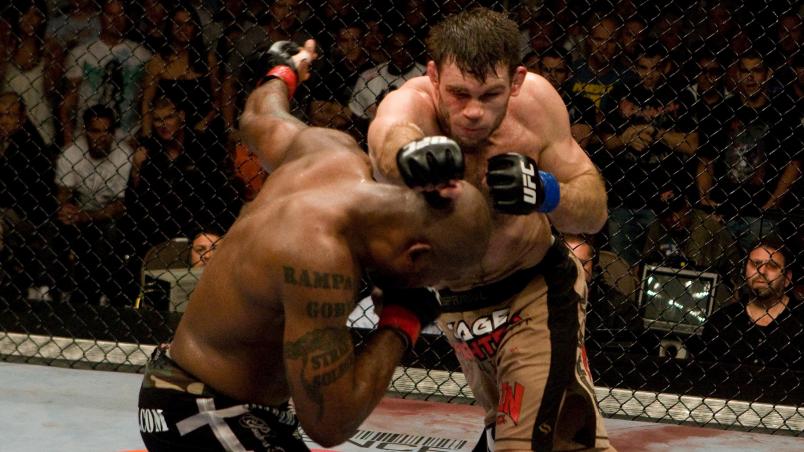 The light heavyweight belt was on the line again when fan-favorites Quinton “Rampage” Jackson and Forrest Griffin battled at UFC 86.

Rampage came out quickly and dropped Griffin with an uppercut, but Griffin remained undeterred. As the fight progressed, Griffin methodically chopped at Jackson’s lead leg, wobbling the champion in the second round. Griffin was also able to get loose on the ground and maintain control while dishing out some ground and pound. The two went back-and-forth for the next three rounds as Jackson looked for the knockout punch whereas Griffin opted to maintain distance and control of the fight. In the end, the judges gave the nod and light heavyweight belt to Griffin.

After coaching against one another on the eighth season of The Ultimate Fighter, Frank Mir and Antônio Rodrigo Nogueira clashed for the interim heavyweight title with a unification bout against the winner of Randy Couture and Brock Lesnar on the line.

Mir showed up with much cleaner striking than he had shown in the past, and utilizing his improved boxing, he knocked “Big Nog” down twice in the first round. In the second frame, Mir knocked Nogueira down again and earned the stoppage victory. Mir became the first fighter to finish “Big Nog” and set his date up with Brock Lesnar at UFC 100.

The best things are worth waiting for, and Dominick Cruz and Urijah Faber put that notion to the test when they concluded their trilogy nearly four years after their initial booking.

After coaching against one another on The Ultimate Fighter: Live, Cruz and Faber were set to fight at UFC 148. However, Cruz would go on to have a nightmare-ish injury run, which included multiple knee surgeries. Meanwhile, Faber went on to challenge for the bantamweight belt twice, falling to Renan Barao both times. The two finally concluded their saga at UFC 199 after Cruz recaptured his title.

In the end, Cruz defended his belt via a unanimous decision victory.

More than 20 months after Ronda Rousey defeated Miesha Tate in their Strikeforce bantamweight title fight, the two locked horns again for an entire season of The Ultimate Fighter before their rematch at UFC 168. 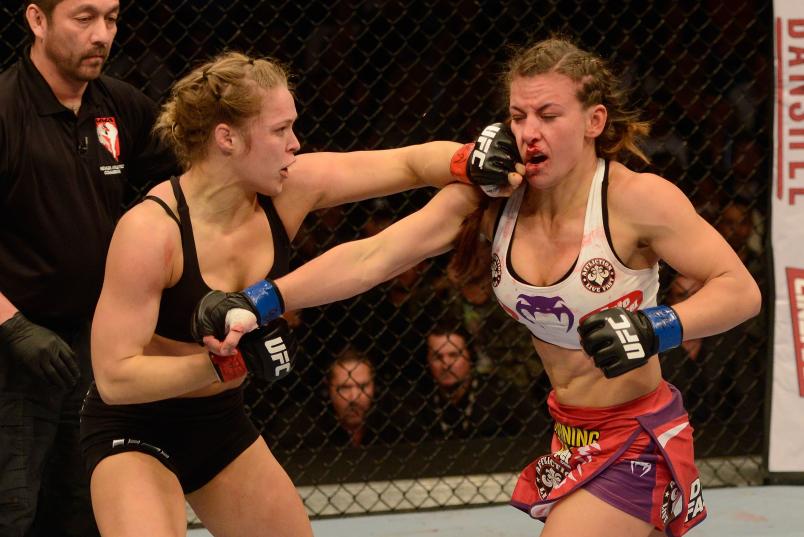 Although Rousey had the upper hand for much of their second fight, Tate had several successful moments as well, taking Rousey down in the first round and escaping a pair of submission attempts in the first two frames. However, Rousey was her ever-dominant self and eventually wrapped up an armbar in the beginning of the third round, defending her belt once again.

In a rematch of their title eliminator bout in 2014, Joanna Jedrzejczyk and Claudia Gadelha coached head-to-head before battling in their Ultimate Fighter season finale.

MORE TUF: Recap All Things TUF | The Best Moments From The Return Of TUF

Gadelha got off to a hot start, dropping Jedrzejczyk with a jab and followed with a takedown. The Brazilian continued to use her pressure and grappling game to do some damage and control the champion, but in the third round after a lot of exhausting grappling exchanges, Poland’s Jedrzejczyk started to get her timing and distance. Her striking volume chipped away at Gadelha, and she was the much fresher fighter in the last round. In the end, Jedrzejczyk held onto her belt, and both fighters were acknowledged for their efforts, earning the Fight of the Night bonus.

A pivotal flyweight matchup went down when Joseph Benavidez and Henry Cejudo duked it out at the conclusion of the 24th season of The Ultimate Fighter. Cejudo was coming off his first title shot against Demetrious Johnson and looking to get back on track whereas Joseph Benavidez came in on a five-fight winning streak after his own title fight loss to Johnson three years prior.

The fight was as expected: lots of scrambles, lots of even striking exchanges and a razor close decision. Cejudo used his wrestling early and pressed forward, even scoring a flash knockdown which Benavidez recovered from quickly. However, Cejudo landed a pair of low shots that forced the referee to deduct a point from him. Benavidez was a bit more in control in the second round as the more active and efficient fighter, and in the third round, it was a bit more of the same. At fight’s end, the judges gave the close, split decision nod to Benavidez.

One of the most heated rivalries in recent memory was allowed to stew on The Ultimate Fighter when TJ Dillashaw and Cody Garbrandt went head-to-head. When they finally squared off at UFC 217, it was hyped as perhaps the biggest title fight in the division’s history.

The two bantamweights implemented their own styles well in the first round, and Garbrandt seemed to get the upper hand when he knocked Dillashaw down at the end of the first round with a big right hand. Everything flipped in the second round, though, as Dillashaw recovered well and dropped Garbrandt with a head kick. Confident moving into the pocket, Dillashaw landed a flush right hand on Garbrandt’s chin and swarmed him with ground-and-pound to get the stoppage. Dillashaw immediately got into Garbrandt’s face, and he ended the night a two-time bantamweight champion.

Justin Gaethje and Eddie Alvarez went to war at UFC 218 with plenty on the line in terms of lightweight title implications. To that point, Gaethje was undefeated and coming off one of the more memorable debuts in UFC history, and Alvarez badly needed a win to get one step closer to recapturing his title.

Gaethje came out and immediately chopped at Alvarez’s lead leg. Over and over again, Gaethje uncorked heavy kicks at Alvarez’s leg, and Alvarez did not respond well despite hanging in tough. Alvarez, on the other hand, focused on punishing Gaethje’s body, and it paid off with some open windows to Gaethje’s head. Alvarez came out fresh in the second round, throwing more shots and sharper ones at that, and when Gaethje was hurt to the body, Alvarez swarmed. The leg kicks kept coming from Gaethje, but Alvarez kept dishing out damage himself and implemented more clinches in the third round. Eventually, the body shots and clinch work took its toll, and Alvarez landed a flush knee on Gaethje’s chin that dropped him and ended the fight.

The “Superfight” delivered one of the most iconic moments in UFC history and sparked a trilogy for the ages when Daniel Cormier moved up to challenge heavyweight champion Stipe Miocic.

Miocic had just fended off Francis Ngannou at UFC 220 and broke the record for the most consecutive heavyweight title defenses with three, and Cormier was looking to become the second ever “champ champ.”

Cormier looked for clinches early, but Miocic was the one who gained control of the light heavyweight champion early along the fence. Once they separated, “DC” opted to reach out and hand fight, utilizing his hand-speed to get past Miocic’s defense. However, Miocic was able to land several 1-2 combinations as Cormier managed the distance. After a few exchanges, Cormier clinched with Miocic and landed a tight right hook that dropped Miocic and gave Cormier the heavyweight title.