Yair Rodriguez is in his eighth year on the UFC roster, but does not turn 30 years old until this coming October.

Those two facts don’t quite feel compatible, but they also explain why it’s likely the talented Mexican fighter’s best days are still ahead of him.

“It has been eight, nine years in this company, but a lot of people come here with a lot of experience,” said Rodriguez, speaking ahead of his main event clash with Brian Ortega this weekend at the UBS Arena at Belmont Park. “I came to the UFC with six fights. Coming to the highest level of mixed martial arts in the world, I think there are little things that you don’t get until you learn them for yourself. I think I need to go through a lot more things in order for me to learn more and more.

“I’m getting there, for sure,” he quickly added. “I’m in my prime age, and I’m getting better every time I fight — I’m more wise, more calm and relaxed, and it’s more usual for me, so the game is a little different now for me.”

The breakout talent and featherweight tournament winner from the inaugural season of The Ultimate Fighter: Latin America, Rodriguez raced up the ranks, collecting five wins in two years following his debut victory over Leonardo Morales at UFC 180 to position himself as the top prospect in the 145-pound weight class.

He suffered through a teachable moment at the hands of Frankie Edgar at UFC 211 but rebounded with a one-of-a-kind finish of “The Korean Zombie” Chan Sung Jung in his next fight 18 months later, earning a stoppage victory with one second left on the clock thanks to an inventive up elbow that landed flush.

A win over Jeremy Stephens eventually followed, and after more than two years away, Rodriguez returned to the Octagon last November in a main event clash with former featherweight champ Max Holloway in a fight that felt designed to determine the next title challenger for Alexander Volkanovski, who had successfully defended his title six weeks earlier with a unanimous decision win over Ortega.

The duo battled for 25 minutes, both leaving the cage bloodied, with Holloway earning the unanimous decision win with scores of 49-46, 48-47, and 48-47 from the judges.

It was a competitive affair where Rodriguez showed he’s capable of hanging with the division’s elite, and the tandem took home Fight of the Night honors, but the defeated 29-year-old didn’t feel it was particularly close, although he certainly learned from the experience. 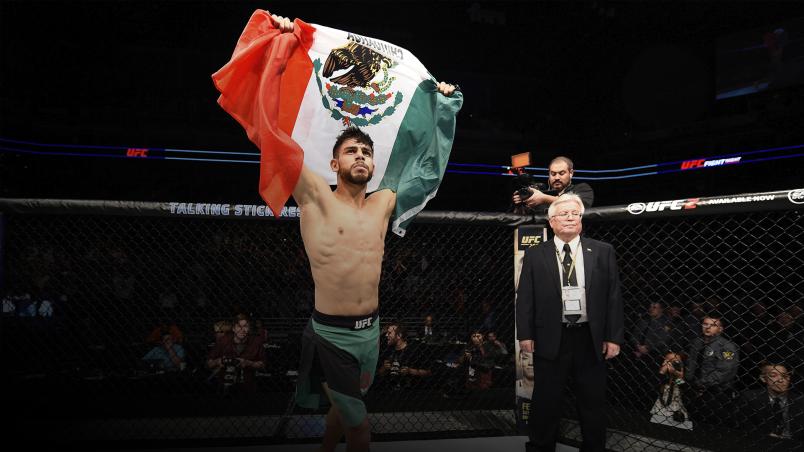 Yair Rodriguez celebrates his victory over BJ Penn in their featherweight bout during the UFC Fight Night event inside Talking Stick Resort Arena on January 15, 2017 in Phoenix, Arizona. (Photo by Jeff Bottari/Zuffa LLC)

“I don’t think it was a very close fight; I think Max dominated most of the fight,” Rodriguez said, addressing his bout with Holloway. “There were a lot of things I had to learn from that. I gained a lot of experience, especially when it comes to strategy and sticking to my game plan. Sometimes I’m creative, but I shouldn’t be that creative in certain situations.

“It’s super-different,” he said of sharing the Octagon with the best the division has to offer. “I think experience means a lot in this game, and Max has it all.

“I still have — I know I’m close to the title or whatever, but I’m not focused on that. I still have a lot of things to learn, and I’m not desperate. There are ups and downs, like a rollercoaster, so I’m just enjoying the ride, doing the best I can with what I have.”

The ride heading into this weekend’s fight with Ortega brought Rodriguez home to Chihuahua, where he finished out his training around family for the first time in a number of years.

“I decided to stay here and train with the people I used to train with before, when I was growing up,” said the skilled headliner, who has trained with Jackson-Wink MMA and the Valle Flow Striking teams in the past. “I have the opportunity to be with my family right now, which is pretty good. It’s the first time that I actually am this close with them this close to fight week.

“My mom is helping me out with tons of stuff, I have the opportunity to help here in the house with the activities that we normally do, so it’s great. I like it.”

He also likes the opportunity to share the cage with Ortega.

The Harbor Area native is another member of the elite class in the featherweight division — a two-time title challenger who has beaten everyone he’s faced aside from the two men that battled it out for championship gold for a third time a couple weeks back at UFC 276. In each of those contests, Ortega showed his heart and tenacity, refusing to wilt despite getting worked over by each of Holloway and Volkanovski in their respective encounters.

Despite having a friendship with one another, Rodriguez relishes the opportunity to share the Octagon with Ortega this weekend, understanding that business is business, there are no hard feelings, and the pairing carries the potential for being an absolute banger.

“It’s always exciting to face somebody with that soul, with that spirit,” he said of stepping in with Ortega, who collected a dominant decision win over Jung between his tandem title fight defeats. “I think everybody in this sport has it, but some show it more than others.

“We’re homies, so it’s cool to share the Octagon with him. There are no hard feelings, no bad feelings towards him — it’s just something we have to do; it’s our work and we understand that.

“There is no need to bring in bad feelings,” added Rodriguez. “There is mutual respect, but that won’t bring down the fight. It’s going to be fire, for sure. He always brings the heat, I’ll bring the heat, and I’m sure it’s going to be a war.” 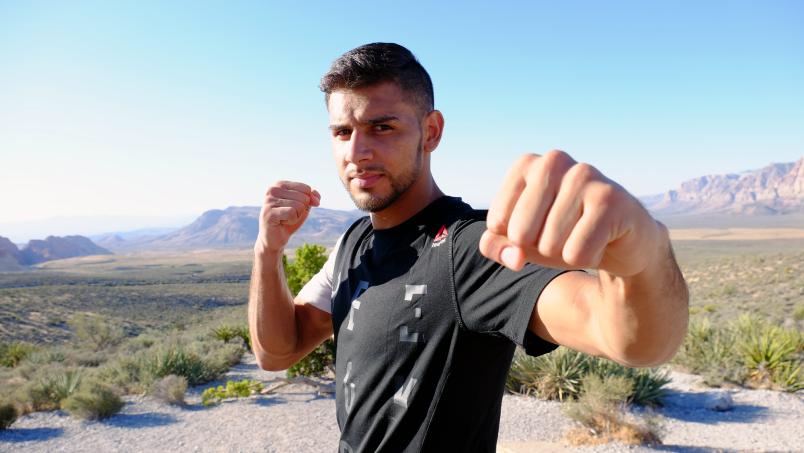 And if he emerges from this latest battle victorious, the gifted 29-year-old could very well find himself in line for a championship opportunity, though he’s not letting the possibility get in the way of his focus on the task at hand.

“I’m always in that position where I could fight for a title shot, and I have never gotten an opportunity to do it, so it would really mean a lot,” he said of challenging for championship gold. “It would be another achievement, and finally fighting for the title would be nice, but for now, I can’t see farther than this fight because many things can happen, so I’m not focusing on that; I’m only focusing on this fight.

“For a special occasion like this, it will be good to be focused 100 percent on what it is.”