Best Benitez Yet Wins By Decision vs. Collard 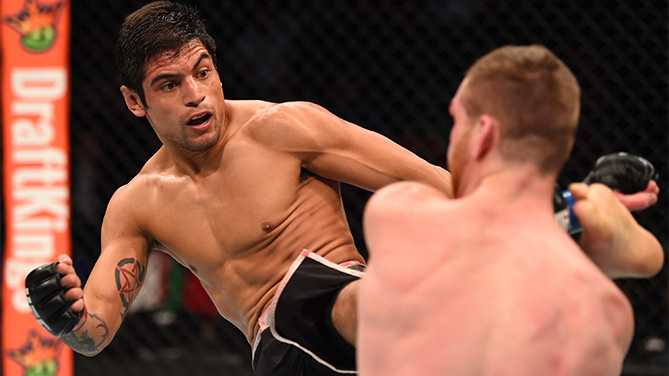 A patient and diverse striking attack led Tijuana’s Gabriel Benitez to victory in the featherweight opener, as he outpointed Clay Collard via unanimous decision.

All three judges saw it 30-27.
"I feel really good, a little banged up, but good,” Benitez said. “I feel like we each had our style and came in ready to fight. Halfway through I did get a bit tired, but I tried to use everything AKA (American Kickboxing Academy) has taught me.”

Benitez rocked and dropped Collard with the first punch he threw, and once the Utah product got to his feet, he caught another hard shot, this time a kick to the body. Collard recovered quickly, but Benitez kept steady pressure on. A low blow by Collard brought a brief halt to the bout, but it didn’t give the American much of a reprieve, as Benitez locked in a tight guillotine choke. After some dicey moments, Collard escaped and then was able to take his opponent’s back, shifting the momentum with under two minutes left. Benitez got out of serious trouble, yet as the two rose, Collard scored with a thudding suplex just before the horn.

Collard kept his high work rate going early in round two, but Benitez’ more measured strikes were more accurate, and midway through the frame, another hard kick to the body hurt “Cassius” Clay. Collard smartly looked for a takedown, but once the two rose, it was clear that he was still in trouble. Benitez targeted the body and moved in for the finish, but the game Collard made it through the round.

The exhausted Collard still tried to make a fight of it in the final round by scoring a few takedowns, but Benitez’ attack was still too much for him, allowing the Mexican prospect to earn his second Octagon victory.

It was far from an action-packed war, but Ireland’s Cathal Pendred will take the win, as he scored a three-round unanimous decision victory over local favorite Augusto “Dodger” Montano to improve to 4-0 in the UFC.

The welterweight bout was scored 29-28 by all three judges.

Pendred (17-3-1) was the aggressor throughout much of the first round, as he chased the lateral-moving Montano, who only acted offensively in brief spurts. The lack of action clearly frustrated the Irishman, who held his hands out several times in an effort to get his foe to engage, but to no avail, drawing boos from the crowd.

Before round two, referee Herb Dean spoke to Montano and warned him that it was within his power to take points off for timidity, and the Mexico City native responded by drilling Pendred with a hard right hand that sent him sprawling in the opening minute. Pendred responded by locking up his opponent against the fence as he searched for a takedown and eventually got it with a little over three minutes to go. Montano would see daylight briefly, only to get dragged down to the mat repeatedly by the Dubliner, who dominated on the mat.

A tired Montano (15-2) tried to get his offense in gear in the final round, but whenever Pendred got within grappling range, he smothered the hometown favorite against the fence, and at a distance, neither fired off a storm of strikes, which left the crowd restless.