Dennis Bermudez enters his fight with Rick Glenn on Saturday night in Boise, Idaho on a three-fight skid, but the last two bouts in that run sting a little more than the first, strange as that may seem to many.

The initial fight in his current slide ended in a flash, the returning “Korean Zombie,” Chan Sung Jung deciding their Super Bowl Saturday main event in just under three minutes. Losing sucks and getting knocked out is never pleasant, but it does come with a certain amount of clarity.

There is no way to second-guess the result as one man is parading around the cage celebrating while the other is being helped to his feet and told what happened.

But the two most recent setbacks on Bermudez’ resume didn’t come with the same kind clarity and have therefore left a bad taste in the Long Island resident’s mouth.

Against both Darren Elkins and Andre Fili, the 31-year-old former Ultimate Fighter finalist went the full 15 minutes, leaving his fate in the hands of the judges. Both times, they returned a split decision verdict. Both times, he was the guy with only one vote in his favor.

“I’m just looking to be meaner,” said Bermudez of his matchup with Glenn, which occupies one of the six main card slots on Saturday’s debut event in the Idaho capital. “I think my last three fights it was touch gloves, move around, do the feel out process, and see what you’ve got.

“This fight, I’m looking to touch gloves and just get after it. Get into a fist fight right away; let him know that, ‘This f****** guy is here to fight.’” 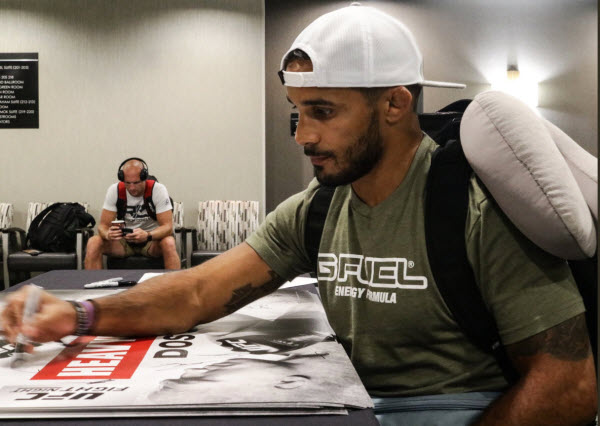 His comments bring to mind something former lightweight champ Eddie Alvarez talked about prior to his UFC 218 slugfest with Justin Gaethje.

After being involved in a series of close fights and trying to be more technical and patient through the first several fights in his UFC career, the Philadelphia native viewed his bout against the then-unbeaten Gaethje as a chance to get back to the “Eddie Alvarez of old” – the aggressive, violent, in-your-face fighter who finished fights and left every ounce of himself inside the cage, win or lose.

“Being violent has always been important to me,” Alvarez said back in December. “It draws people in, it makes people want to watch, it gets people excited – so that’s what I’ve always looked to do and the most important thing to work on.”

A couple days later, he stepped into the Octagon and went to war with Gaethje, handing the former World Series of Fighting champion his first career loss in a back-and-forth slugfest that ended with a knockout win for Alvarez.

While Bermudez doesn’t go as far as suggesting he wants to be known as “The Most Violent Man in the UFC” as Alvarez did that evening in Detroit, he does acknowledge that there are times when fighters overthink things and try to be too precise with their movements. He’s looking to eschew all of that on Saturday night when he gets in the cage with Glenn.

“I think sometimes fighters get really in-depth with themselves where it’s, ‘I’m looking to do this, at this angle, at this time,’ where it’s like, ‘Dude, hurt him. Do whatever it takes. Be grimy,’” offered Bermudez, one of three fighters in the UFC to hold a victory over reigning featherweight champion Max Holloway. “We practice good sportsmanship in the gym where if you stun your buddy, you don’t keep beating the snot out of him and you’re taking care of your teammates, but sometimes that carries over into the bouts. I’ve seen guys stun a guy, stop and be like, ‘You good?’

Glenn is a lanky veteran who has struggled to find consistency since arriving in the UFC, sandwiching a pair of victories between two losses. Two fights back, he looked outstanding against Gavin Tucker at UFC 215, battering the Newfoundland native to the point of earning scores of 30-25 and 30-24 from two of the judges.

But last time out against Myles Jury, he was the one on the business end of a one-sided decision.

Bermudez is keen to replicate that performance on Saturday night and follow Alvarez’ lead while getting back to the “Dennis Bermudez of old.”

“Nothing (about his game) excites me,” he said regarding his pairing with Glenn. “I like that he’s kind of a grappler because I can hold him down and beat him up. Beat him at this own game or the game he thinks is his.

“I actually want to go back to the ‘get in here and get this fight over with’ Dennis Bermudez. I haven’t had a finish in a long time and I would like to finish this guy.”