Bermudez hoping his five-year anniversary comes off a win

If it seems like Dennis Bermudez has been competing in the UFC’s featherweight division forever, it hasn’t been that long, but “The Menace” is approaching his five-year anniversary as a member of the promotion’s roster, marking him as a mainstay at 145 pounds.

But before he entered the Octagon for the first time in December of 2011 as a finalist on Season 14 of The Ultimate Fighter, he was at a crossroads. Not in his career, but his life.

“It was whichever came first,” he said of his career prospects at the time. In one year as a pro mixed martial artist, he had fought nine times, all the while working in a UPS warehouse. He knew where he was leaning, but he needed that push. “The difference between fighting and working at UPS is that in fighting, if you did well, you kept advancing and getting higher up the ladder and up the ranks. Whereas at UPS, you had to put in your time, and it was all seniority.”

The push came in the form of TUF, where he defeated Jimmie Rivera, Stephen Bass and Akira Corassani to put himself in the featherweight final of the reality series. He lost that bout to Diego Brandao, but he had earned himself a place on the roster, and he hasn’t let go of it since.

Now 11 fights into his UFC career, the 29-year-old Bermudez is in Saturday’s UFC Fight Night co-main event against former TUF Brazil winner Rony Jason. It’s a good fight for the No. 8-ranked Bermudez, who would love to win this weekend and then get on November’s event at Madison Square Garden, and this is a good place for him to be in, especially after snapping a two-fight losing streak with a February win over Tatsuya Kawajiri.
RELATED CONTENT: Jason taking on Bermudez for shortcut to title | Downes predicts Salt Lake City | Inside the matchup

But even with his defeats to Ricardo Lamas and Jeremy Stephens, Bermudez takes a practical view of the whole situation and life at the top of the sport.

“I didn’t think I was doing anything wrong losing those two fights,” he said. “The only thing I could think of is that I made a mistake and got caught. Prior to those losses, I felt like I was doing really, really good, and then everything changed in a moment’s time. If I really dwelled on it and thought about it, I could drive myself into a deep, dark place, and it could be bad. But it’s over, it’s done with, you gotta move on and move forward. It happens. This sport can make you the happiest man on the planet or the saddest. It’s a very unforgiving sport.”

A lifetime of wrestling prepared Bermudez for the highs and lows of competition, and he does admit that losses sting him particularly hard. The difference is, he now knows how to take the bad with the good and carry on.

“When you lose, it’s got to hurt,” he said. “You’ve got to be upset about it. There are a lot of sacrifices that go into this, so when things don’t go your way, it’s gotta hurt. That’s how I’ve looked at it, even when I was younger wrestling. I would lose and I’d be in the locker room crying and I’d be upset about it because I didn’t train to lose.” 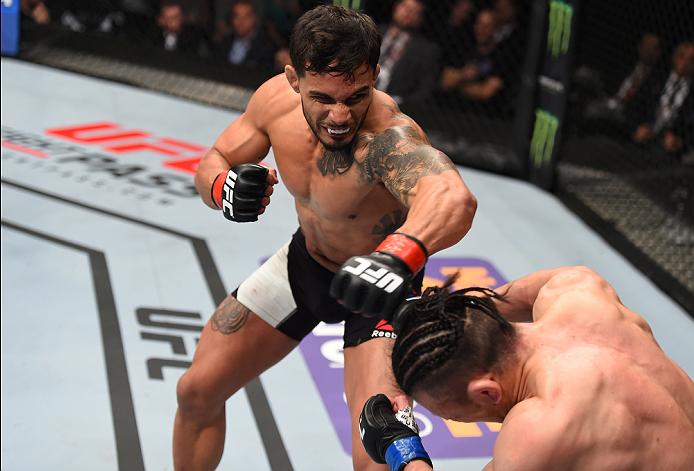 Yet when Bermudez has suffered setbacks, he’s come back even stronger. The first two losses of his pro career in 2010 were followed by his successful run on TUF. The loss to Brando preceded a seven-fight winning streak. As for his defeats to Lamas and Stephens, he’s already come to grips with them and put them in the rearview mirror.

“The first loss (to Lamas) was definitely tougher than the second one (against Stephens),” he said. “I don’t necessarily think it’s because of who I lost to or where I lost, but how I lost. Tapping out and saying, ‘Hey, I had enough,’ versus being unconscious, I went out on my sword in the second one.”

This time, he’s content with being the one forcing his opponents to submit or get knocked out, and with fellow UFC fighter Ryan LaFlare helping him add some new wrinkles to his game while the welterweight prospect heals up some injuries, Bermudez is going to be bonus hunting in Salt Lake City this weekend.

“Since my last fight, I’ve been working some new things,” he said. “Ryan LaFlare has been injured, and he’s been coaching, so I’ve been picking his brain and we’ve been doing a lot of work together. I’m feeling really comfortable with him and I like it a lot. I’m excited to get out there and showcase what I’ve been doing.”