“As a fan of MMA, I do get worked up for the
fights, but at the same time I have to be cool, calm, and collected, and
not treat it as if it’s any different than any of my other fights.” - Benson Henderson 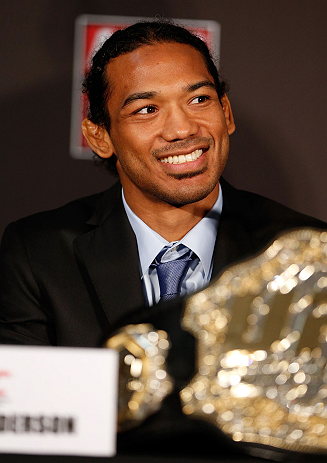 No fight is easy. But fights with Benson Henderson are harder than most. The proof is right there on his record: 17 wins in 19 fights, four five rounders, and Fight of the Night awards in three of those four.

So when it comes to fighting the UFC lightweight champion, you had better put your hard hat on and pack a lunch because he’s certainly going to do so. And he does so with no complaint, no declarations that he is going to finish a fight by any means necessary, or any other cliché designed to placate fans or the media. Henderson is showing up to work.  If he can get out of there with his title belt intact after a 30 second knockout or submission, that’s great; if not, he’s ready to work his full shift and do what it takes to get his hand raised.

It’s a work ethic to be admired, but not one that’s very surprising considering the woman who taught it to him, his mother Song.

“Obviously I’m biased, but I think my mom’s work ethic is one of the best I’ve seen in my entire life,” said Henderson. “I definitely correlated that if you want anything in life, you have to work your butt off for it. My mom wanted my brother and I to have the cool clothes when we were in junior high and high school, and she would work an extra job for that because she wanted me and my brother to be happy. That was just a random example, but when she wanted a new car, and I saw her consciously making a point to work hard and save the money so she could buy the new Ford Explorer.”

His mother’s example imbedded in Henderson the value of hard work, and while his talent, athleticism, and drive are all admirable traits in his run to earning both the UFC and WEC championships, it’s that willingness to outwork opponents and go that extra mile in the gym and the Octagon that may keep the belt around his waist for a long time. So there will be sweat and there will be blood, but usually there will also be Henderson with his hand raised.

But when asked about this work ethic, he doesn’t stop at his mother. He is also quick to point to his high school and college wrestling coaches and his current MMA coach John Crouch as more people who have shaped him as a fighter and a man.

“My high school coach, Mike Bressler, had a big impact on my life,” said Henderson. “My college coach, Steve Costanzo, his work ethic was off the charts. We (at Dana College in Nebraska) got laughed at, we were a joke in the NAIA, and the year he left, he left as a defending national champion, and set the all-time scoring record, and he did the same thing in Division II. And John Crouch – he’s a band nerd. He did marching band in Colorado and he’s like a 17-time national champion. And that’s just from the great work ethic he has. And he’s taken that same work ethic and applied it to jiu-jitsu and to being an MMA coach. So I’ve had a lot of good examples in my life of what a good work ethic does for you.”

You may say that the 29-year-old Henderson has been lucky to have been surrounded by such positive role models as he grew up and matured into an adult. He would say that he’s been blessed, and as he went from unknown to champion to contender to champion again, he’s avoided the pitfalls so many young pro athletes have encountered as their tax bracket and notoriety changed. So while many run with an ever present entourage and fall prey to the trappings of fame and those looking to take advantage of certain situations, Henderson’s circle is a tight one, extended only to his team, his girlfriend, family, and close friends.

“I try to put good people around myself,” he said. “But putting good people around you and delegating, it really takes a team to have a world champion. Just like it takes a team of guys to have a Super Bowl championship team. It takes guys behind the scenes, general managers, equipment managers, assistant coaches, and it takes a team for any successful athlete, team, or person. I have a good team behind me, starting with my head coach, who is one of my best friends and a guy I started with, John Crouch. My girlfriend, Maria Magana, she does a lot for me, she always takes care of me and puts up with all my crap. All my training partners, Efrain Escudero, Joe Riggs, Chris Gruetzmacher, Victor and Yaotzin Meza. My manager Malki Kawa, my PR guy John Fuller, I just have a good team behind me who help me out and allow me to concentrate on what I need to concentrate on, which is fighting and winning.”

It helps to have a good BS detector on at all times as well, but Henderson admits that his is “kinda 50-50,” forcing him to lean on his team to help keep things running smoothly.

“I trust John Crouch and his judgment,” said Henderson. “He has a pretty good BS detector as well, and I think in all relationships, you’re gonna have ups and downs. It’s all about overcoming and understanding those ups and downs. Sometimes your differences will be too much and you can’t have a relationship, but for me, I’m a pretty laid back, relaxed guy. I think I have a pretty decent relationship with most people, and I can go with the flow. But I’ve been blessed most of my life. In my fighting career I’ve never had a serious injury, I’ve managed to stay healthy, I managed to have good people around me, and I think all that’s because the Lord’s blessed me each and every day of my life.”

Have you noticed anything yet? A thousand words in and Benson Henderson has rarely discussed Benson Henderson. For one of the top fighters in the world to be this humble and so willing to deflect praise to others, it’s a rarity to say the least. In fact the only fighter that comes to mind immediately as having the same attitude in giving publicity to his teammates is the man Henderson faces in the main event of UFC on FOX this Saturday, Nate Diaz. But for the champion, it’s not such a big deal; it’s just something that comes naturally to him.

“It’s my personality,” he said. “Most fighters thank their teammates and their coaches because they do so much for them, and they thank their wives or girlfriends. And I do the same thing. I’m not saying that I am any more blessed than other fighters, but the type of guy I am, I want to make sure I give credit where credit is due. I feel very strongly about my team, my guys, and my support staff, and my girlfriend, and I know without them I couldn’t be doing this. So I’m very thankful and I want to make sure they get their props.”

And given the arduous days and nights spent training for his second title defense against Diaz, Henderson expects to have a chance to give his team their props to a nationwide audience once again after Saturday night’s bout. Yet despite the toothpick in his mouth, the laid-back style, and the suits at press conferences, he knows that when it’s all said and done with the number one challenger to his throne, it’s likely going to be another one of those knockdown, drag ‘em out fights that have become his trademark. You won’t hear that out of his mouth until it’s all over though.

“As a fan of MMA, I do get worked up for the fights, but at the same time I have to be cool, calm, and collected, and not treat it as if it’s any different than any of my other fights,” he said with a chuckle. “Deep down, I can admit that this is an exciting matchup, and as a fan of MMA, looking back two or six months later, I’ll look back and watch the fight and be like ‘oh man, that was a really cool and exciting fight.’”

Either that, or just that it was a good night’s work.