"To be able to come out on top and get your hand
raised every time, I’ll do whatever it takes." - Benson Henderson 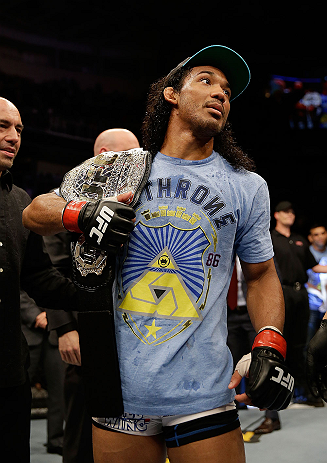 In 21 professional fights, Benson Henderson has failed to have his hand raised in victory just two times. One of those defeats, to Anthony Pettis in 2010, he gets to avenge this Saturday night inUFC 164’s main event in Milwaukee. The first, against Rocky Johnson in 2007, probably won’t see a similar situation, but the UFC lightweight champion does remember Johnson fondly.

“I ended up working construction for Rocky Johnson,” laughed Henderson. “He was my boss a month after we fought.”

Bet you never saw that one coming, but after the 2007 bout, which Johnson won by submission via Anaconda choke, the then 24-year-old Henderson - just 2-1 in his budding MMA career – needed to supplement what little fighting income he had, and “The Rock Monster” just happened to have a spot open for the futur e champ.

“It was cool,” recalled Henderson of his time working with Johnson, who remains an active fighter at 42. “He’s an older gentleman now and he knows he probably has a very short run in his career left, but he’s one of those guys, he’s a tough fighter, a grinder, just a good guy all around. And working for him was a good experience for me. I got to work while at the same time doing it for someone who understands the nature of the fighter lifestyle.”

Six years after that fight, it’s the one former opponent Henderson probably doesn’t mind talking about at length. That may not be the case for Pettis, and not because of any personal beef between the two, but because this is the third rematch of his career (Donald Cerrone and Frankie Edgar being the first two), and after a while, you simply get tired of discussing the same opponent again.

“When it comes to fights, especially rematches, I’ve had a few, and that’s the way you feel after a while, like ‘oh man, we’re talking about this guy again?’” he said. “It’s not enough that we talked about him the entire time before, now we’re talking about him again. So am I tired of hearing his (Pettis’) name? Absolutely. If I didn’t hear his name for a while after we’re done fighting, that’s fine by me. But that’s the case when it comes to fighting. It’s not a matter of, if you’re a fighter, you picking your opponents; it’s about your opponents working their way up, and if you have to fight the same guy ten times in a row because he worked his way back up to the top, you fight the guy ten times in a row. It doesn’t matter. That’s my opinion on it. Whoever works their way to the top, that’s the guy I’m gonna face off against. Anthony Pettis worked his way to the top, (UFC President) Dana White gave him the title shot, so that’s why we’re talking about him.” 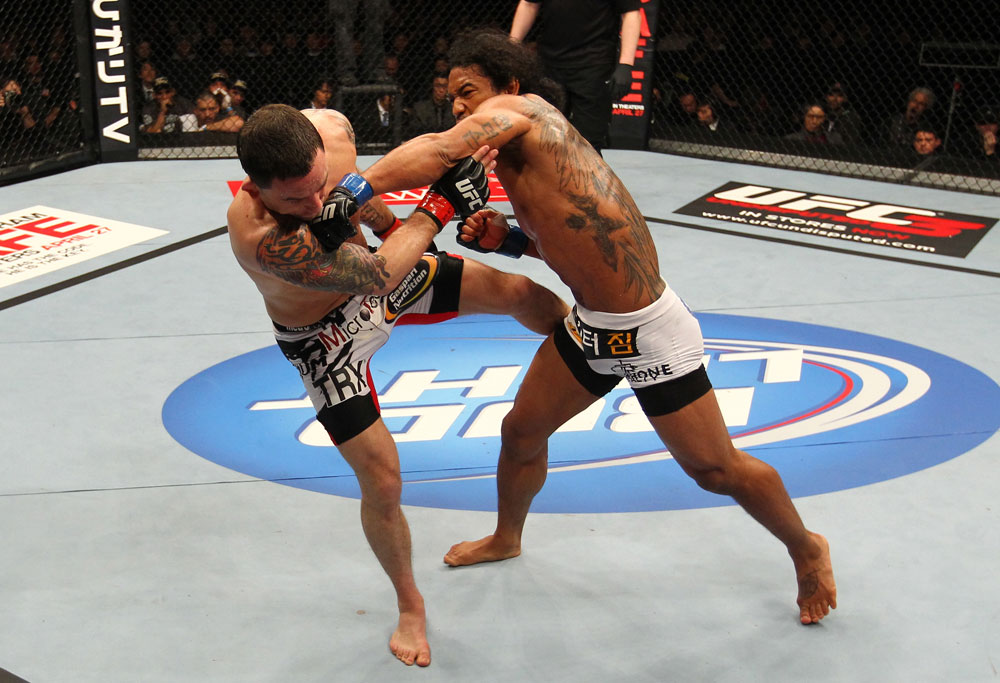 2012, Henderson has taken on all comers thus far, defeating Edgar in their rematch before going on to beat Nate Diaz and Gilbert Melendez in his last two bouts. And yes, when you’re the champ, you fight whoever’s next, not whoever you choose. But you do get the impression that if Henderson did get to pick his next foe, it was going to be “Showtime.”

“You could say that,” admits Henderson. “I’m not one of those Billy Badasses or Terry Toughnuts where I’m saying I’m gonna fight this guy or I want to fight that guy, blah, blah, blah. But I knew having one loss in the last seven years, I’d probably want to get that loss off my record, so to speak. You have to move forward, be able to man up and move on with life. But in perfect world, if you can pick who you’re going to face off against, why not take the one guy who’s beaten you in the next seven years.”

Why not indeed, and though “Smooth” was originally scheduled to face TJ Grant this Saturday, fate intervened in the form of a Grant injury, opening the door for the best possible lightweight fight that could be made at the moment. And while a win over Pettis would likely be followed by the Grant fight, beyond that, you have to wonder if Henderson is thinking about what’s next. And he is.

“Of course there’s always gonna be new guys, up and comers, guys trying to make a name for themselves, the next young stud, that sort of stuff,” said Henderson, who will surpass BJ Penn and Edgar for most UFC lightweight title defenses with a victory on Saturday. “But after a while, you defend the belt so many times, and you start looking around like ‘who do I have next?’ and that sort of stuff. After Pettis, there’s still a pretty long list of guys who are tough: TJ Grant, before he got injured, was supposed to be a title contender and we were gonna face off, and there’s a few other guys out there. But I would be interested in some sort of a Superfight. I know there were a lot of people talking about Superfights before Anderson lost. Either from ’45 or 170, both of the champs there (Jose Aldo and Georges St-Pierre) are on long runs and are established champions, known as being two of the best fighters, pound-for-pound, on the planet, and I would like to also be on that level and cement myself, so why not have a Superfight and go that route.”

Either fight would be an intriguing one, but you have to wonder if that’s what Henderson needs to do to reach the top of the pound for pound list. Boxing great Bernard Hopkins ruled the middleweight division for a decade before reinventing himself at light heavyweight, and he didn't truly receive the P4P recognition he deserved while reigning at 160 pounds. Anderson Silva’s legacy was undoubtedly enhanced by his jumps to light heavyweight, and there is already talk of Jon Jones eventually moving to heavyweight. So can Henderson stay at 155, dominate, and still be in the upper reaches of the P4P list?

“I think it’s based on the individual,” he said. “If they stay mentally focused for that long, ten years is a long time, and I’m definitely not against it. If I can do it, I would love to do that. I’m not gonna jump around weight classes, I’m not gonna go from 155 to ’70 to ’85. In boxing, they can do that because the weight classes are closer. In MMA, you can’t really do that. It’s too big of a gap to jump from weight class to weight class. I would be okay with having one or two Superfights, no higher than 170, and at the same time I’m going to stay in my weight class and defend my belt at 155. I think the lightweight class is so deep that I think I can get that (P4P recognition) by staying and not having to go up. But it is a refresher to be able to have a Superfight at 170, something out of the ordinary.”

Henderson is already something out of the ordinary, a fighter who has an uncanny knack of always finding a way to win, even on an off-night. That’s something you can’t teach and can’t quantify, and should he get past Pettis and even the score with his nemesis, there may not be anyone that comes close to touching him for a long time. > Watch: Henderson's Revenge

“The difference in skill level, especially at 155, between the belt holder -- myself -- and the number ten guy isn’t that big,” he said. “Every fight’s going to be a tough, hard fight and if I have a bad night and he has a really good night, guess what, he might win. That’s the difference at 155, and to be able to come out on top and get your hand raised every time, I’ll do whatever it takes. If I have to run on a treadmill, set the speed at 11, and see who gets off first, if it’s holding burning embers in your hand and seeing who can hold on to them the longest, whatever it is to be able to just win, that’s something that’s hard to categorize or measure. There is no statistic for it, it’s just that will, that desire to dig down deep.”