Benson Henderson - Ready for Round Six 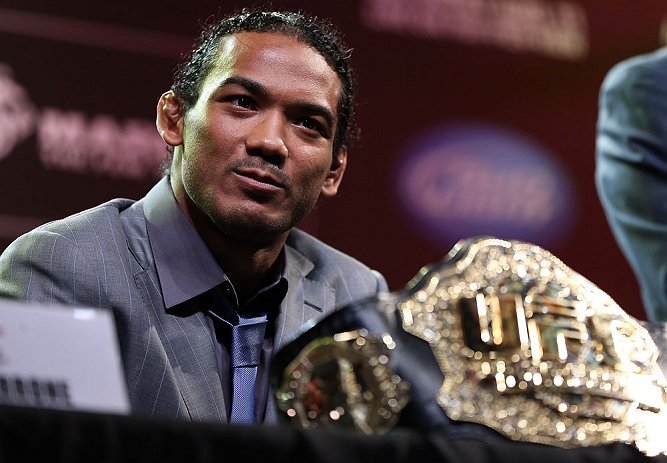 If you’ve ever wondered what makes two of the most laid-back and affable fighters in the UFC battle for 25 minutes as if their lives depended on the outcome, UFC lightweight champion Benson Henderson can give a little insight on what he believes pushed Frankie Edgar and himself during their first fight in February, and what will likely do so again in their rematch this Saturday in Denver.

“We don’t have that primadonna mindset,” said Henderson, referring to the state of mind possessed by that toughest of tough species – the wrestler. “We’re wrestlers at heart and if we’re not the best, we want to beat the best so after we beat them we can call ourselves the best. So I think a lot of it stems from being wrestlers.”

That means that while there may be some flashy techniques or jaw-dropping moments at times, for the most part, the end result will be determined by who can suffer the longest, and who can endure through the pain, the blood, and the sweat and break down his opponent. What results is usually a Fight of the Year candidate, and that’s the good part for the fans. For fighters like Henderson though, it’s not about putting on a good show, though that is a nice fringe benefit.

“I don’t feel pressure or anything like that,” he said when asked about being expected to deliver epic battles each time out. “It’s just the way we (he and Edgar) fight. Every time Frankie fights he puts on a good show, and when I fight I always try to do the same thing.”

So what is the endgame for the man dubbed “Smooth” but whose all-out aggressive style is anything but that?

“The mindset of a wrestler is to go out there and attack, attack, attack, and beat your opponent and break his will,” he said. “Even in practice, I want to break my opponent. I want my teammates who I love, my brothers who help make me better, I want to break them during practice. Those hard, brutal, tough practices develop and sharpen your killer instinct and that desire to wrestle the best and to beat the best.”

It’s far from what you would expect to hear from the comic book-loving, toothpick chewing Henderson, who looks to be better suited for an eventual gig as a college professor than as a prizefighter. Then again, that’s what makes him such a compelling figure in the sport. Frankly, there’s no one like him, no one to really compare him to, and that’s the way he likes it. He wants to be a pioneering force in the game, but not because of what he does outside the Octagon, but because he wants to break records and reign atop the 155-pound weight class as long as he possibly can. And he doesn’t want to do it by tiptoeing through the lightweight landscape.

“I don’t want MMA turning into boxing,” he said. “And I think fighting in general in the UFC and MMA is not like boxing. It’s not like, oh, you call out who you want. I want this guy or I won’t fight this guy. To me, it’s more like the NFL. In the playoffs, you don’t have a choice. ‘Oh, we don’t want to play the New York Giants, we want to play the San Francisco 49ers.’ Well, guess what? You don’t have a choice, the New York Giants won and you have to play them next. For me, I don’t care who I fight next. Honestly, I want to fight everybody. I want to fight everybody and I want to beat everybody. It’s just a matter of them doing their job and waiting to get to a title shot. I have no control over who the UFC picks next, and I don’t care. It’s up to them to win and get to a title shot, and I’m gonna work my butt off to make sure I have this belt a long, long time, and hopefully I can fight all of them.”

In the past, I’ve brought up the name of boxing legend Joe Louis to Henderson, talking about the 12 year reign of the Hall of Famer who defended his heavyweight crown 25 times during that period. Henderson’s enthusiasm to possibly make the MMA version of that run was evident, and it wasn’t for a catchy soundbite; it was because he meant it. As far as he’s concerned, that’s what defines a champion.

“If he’s the next guy in line, and he’s good enough, and he’s the guy who (UFC president) Dana White says I fight next, you get in there and you beat him up, and then you fight the next guy and the next guy. It’s plain and simple.”

Henderson doesn’t hesitate to say that he owes much of this attitude to his time wrestling at Dana College in Nebraska.

“It’s just my personality and the type of person I am,” he said. “If we go play a Monopoly tournament somewhere, I want to play the best guys and beat the best guys. It was also developed and sharpened in college wrestling because you want to wrestle the best guys. You can go to the easy tournaments and wrestle a bunch of chumps and win every tournament and go undefeated; it’s really not too hard. But if you want to challenge yourself and truly be the best, you can do that, and college wrestling definitely instilled that in myself and in a lot of the top fighters.”

So if you expected a post-title winning letdown from the 28-year old, it didn’t happen. He may be working even harder than he did before, and this is a guy whose work ethic has always been one of his biggest attributes.

“Life hasn’t changed,” he said. “It’s pretty much the same. I’m a pretty low-key kind of guy. I spend a lot of time at the gym and train a whole lot, and I’m training even more with the belt because I want to keep it. That requires me doing a lot more than what it took for me to take it.”

Yet as you talk with Henderson about life as a champion, his goals, and what he wants his career to look like, you do get a look at what may be the true catalyst that pushes him as hard as he goes in the gym and the Octagon. And it all goes back to his reign as WEC champion, one that ended at the hands of Anthony Pettis in December of 2010. After that fight, Henderson was on his way to the UFC and obviously things worked out well for him, but when he talks about losing the title, there is still that sense that he hasn’t forgotten that pain of defeat.

“Having the belt and losing it kinda stuck with me and it was a big moment in my life, so I definitely want to make sure that does not happen again,” he said. “You’re gonna lose eventually, that’s just gonna happen, but hopefully for me it doesn’t happen for quite a while.”

In 18 pro fights, many contested against top-level opposition like Edgar, Pettis, Donald Cerrone, Jamie Varner, Clay Guida, Jim Miller, Anthony Njokuani, Mark Bocek, and Shane Roller, Henderson has only lost twice, to Pettis and in his third pro fight in 2007 against Rocky Johnson. Guys like that don’t take defeat well or lightly. Edgar is the same way, with his record currently sitting at 14-2-1. Someone will take a third defeat this Saturday, and Henderson is determined to make sure it’s not him. That means taking the approach that if ain’t broke, don’t fix it.

“It is different, and it is another dance, but really it’s just a matter of who got better at what they do,” he said. “Obviously there will be a few new dance steps and a few new twists and twirls and all that, but it all comes down to fundamentals and who improved the most in those basics and whose team can put together a solid gameplan. My coach, John Crouch, and my teammates, we do a pretty good job of putting together a gameplan, and I’m able to go out there and implement that gameplan most of the time.”

As for the peculiar details that come along with fighting someone a second time, Henderson is keeping the focus on himself and not on what Edgar is planning on doing to reverse the verdict of the first fight.

“We always try to focus more on ourselves rather than our opponents too much. Obviously if our opponent has a huge high kick, we know that he has a very powerful and dangerous headkick and he knocked out his last five opponents with it, so we’ll watch out for that, but for the most part we’re worried about ourselves and how we’re gonna get better, what we’re gonna do, how we’re gonna work our gameplan, and how we’ll instill our will during the fight. Anytime you do see the same guy again, I think it’s important not to get complacent and not completely miss what he brings to the table and how much better he is in rematches. We all know Frankie is way better and way tougher in rematches, so you just can’t dismiss him out of hand in a rematch.”

This is the third time New Jersey’s Edgar has faced the same opponent more than once, and in those bouts, he’s 2-0-1 (two bouts with Gray Maynard and one with BJ Penn). This is only the second rematch of Henderson’s career, but he didn’t do too badly in that one, as he revisited his five round 2009 war with Cerrone by ending the 2010 rematch in under two minutes.

“Not too bad, huh?” he laughs. “Sometimes you get a rematch and I have a little chip on my shoulder. I go out there and perform well.”

Will there be a repeat to this pattern this Saturday night?

“I definitely want to end the fight,” said Henderson. “I don’t like having fights go to decisions, but Frankie’s tough. To make that happen, it’s gonna take a lot of hard work.”

Well, hard work’s never been a problem for a former college wrestler like Benson Henderson.