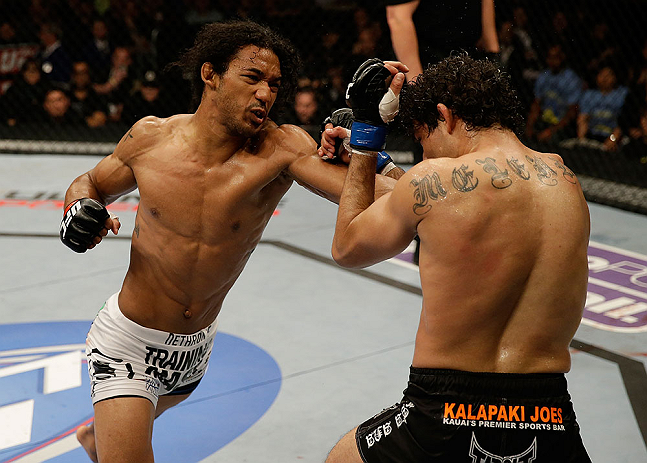 Redemption is a curious word.

When applied to an individual it indicates that person is seeking some type of greater sense of accomplishment by overcoming a particular adversity. When that idea is set in motion, other complexities such as revenge and retribution are typically woven into the situation, and the entire scenario veers off path to become something else entirely.

Five months ago at UFC 164 in Milwaukee, the lightweight cardio king lost the championship belt he’d been holding onto for two years. While he was originally slated to face hard-nosed Canadian T.J. Grant in the main event, an injury suffered by the Nova Scotian put him on the sidelines, and forced the UFC to seek out a replacement. When Anthony Pettis - the closest thing Henderson has to a rival in the sport - was selected as the replacement, the pot-stirring came in fast and furious fashion.

While the two men hold no personal grudges toward one another, Pettis was the last man to defeat Henderson since the first loss of his professional career in 2007. On that night in 2010 -inside the little blue cage of the WEC - “Showtime” earned a unanimous decision victory and took ownership of the WEC lightweight title. > Watch: A Fighter's Faith

In the lead up to their tilt at UFC 164, much was made of Henderson’s ability to make things even with Pettis and a victory over the Duke Roufus fighter would have gone a long way toward Henderson putting the 26-year-old behind him for the immediate future. Unfortunately for Henderson, the second meeting would go further south than the first and he was submitted via first-round armbar.

On a stage as bright and rife with high drama as the UFC Octagon, the bigger storylines swirl in the aftermath of a high profile tilt like storm clouds. But while Henderson certainly acknowledged they were hovering over head, he saw no point in standing in the rain. The best thing he could do was dive back into the gym once his body healed up and set about taking the small steps back to the path he’s always been on.

Where he’s set lofty goals of becoming one of the most dominant champions in UFC history, the truth of the matter is Henderson’s true motivation is to exist in a state of continuous improvement. The former champion is prone to his using what has become his signature expression on Twitter of “One percent better” as he heads into the daily grind, and if he’s accomplishing that task, the other elements will simply be as they are.

“Sadly, and I’m probably not the best sound bite here, but it’s the same as always and just another fight,” Henderson said. “It doesn’t matter if it’s your first fight in the UFC, your first fight on a main card, or the main event; ultimately it doesn’t matter. People ask how I’ll come back. I’ve had two losses in the past seven years and people are wondering how I’ll come back. A fight is a fight. I’m going to come into this fight prepared and show out like I always do. I’m always 100 percent prepared and 100 percent ready. I’m going to train like I always do and I’ll come in ready like always. > Watch: Henderson submits Jamie Varner

“I absolutely keep it simple and not just in fighting but in life in general,” he added. “I try to keep 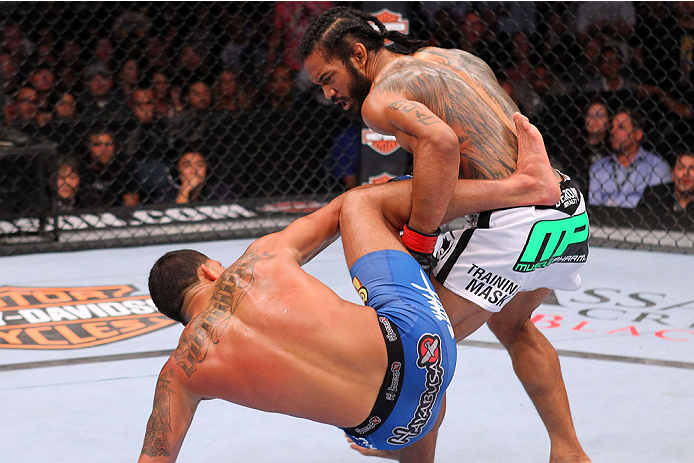 things simple and not too complicated. You can worry yourself to death and get caught up in this and that and one hundred million things you have no control over. What do you have control over? I have control over how I train by going to practice in the morning and in the afternoon. Performing well during the fight…those are the things I worry about. Just that next step because everything else is everything else.”

The next step and task at hand will come in the former of former Strikeforce champion Josh Thomson. The two top-ranked lightweights will square off in the main event of UFC on FOX 10 on Jan. 25 in Chicago in a bout that will carry heavy implications in the lightweight title picture.

“The Punk” was originally slated for a title shot against Pettis at UFC on FOX 9 in Sacramento before the champion suffered a knee injury in training and was forced out of the fight. While championship opportunities are certainly hard to come by in the highly competitive world of the UFC, Thomson wasn’t interested in waiting around and saw a potential bout with Henderson equally appealing. Since he couldn’t fight the man with the title, he agreed to step into battle with the last man to hold the strap before Pettis, and this bout has the potential to produce fireworks.

Both fighters are well-versed in the sport and each has a knack for a pushing a hectic pace which has proven difficult for the opposition to handle. Henderson sees the matchup as one fans can get behind and is certain they will deliver when the Octagon hits the United Center in late January.

“I think this is a great matchup stylistically,” Henderson said. “You are going to see both of us going hard. I can and have gone 25 minutes and so has he. We’ve both gone all-out for five rounds at a high pace. I’m not talking about a slow 25 minutes like we sometimes see with heavyweights where they just lean on one another; I’m talking about a non-stop, fast-paced 25 minute fight where both guys are getting after it. He’s been working his wrestling for a long, long time and I’ve been working my standup for a long time as well. We are both pretty good in all areas. We’re maybe not great in one specific area that outshines all others, but we are both pretty solid in all areas. > Watch: Benson Henderson's UFC Breakthrough

In a showdown between two of the best 155-pound fighters on the roster, naturally there is going to be a fair amount of title talk hovering above the bout. Pettis is going to be sidelined for the better part of 2014, and the winner of the tilt between Henderson and Thomson will put themselves in a great position no matter how the division eventually moves forward. But this is a key example of what Henderson means by keeping things simple.

While there is no doubt he was a proud champion in his tenure atop the lightweight fold, he refuses to let himself get lost in thoughts of what once was and could be again. He knows the belt doesn’t belong to him anymore, but if he allows himself to get caught up in thinking about

how he’s going to run it down and what things have to happen in order for that opportunity to come to fruition, he’s just treading water instead of moving forward.
That’s why he takes it one step at a time. It’s how he reached the top of the sport once, and it’s how he intends to do it again.

“It’s definitely in the back of my head, but I’m trying to not think about it as much,” Henderson said about the title. “When you get to a certain point in your career, and you are doing so many interviews, when you are continuously asked what you think about the color red over and over, pretty soon the color red is all you are thinking about. Then because I get asked that stuff, my mindset does kind of change. I start thinking about how I’m going to do this or that; things I never thought about before being asked those questions. I want to get back to keeping it simple because those things don’t matter. To me, it’s all inconsequential. I put my focus on the next guy up and that’s Josh Thomson and I’m gonna go beat him up bad.” > Watch: Henderson's Signature Moves