"My goal isn’t to make people miserable, my goal is to mentally and physically break them.” - Benson Henderson 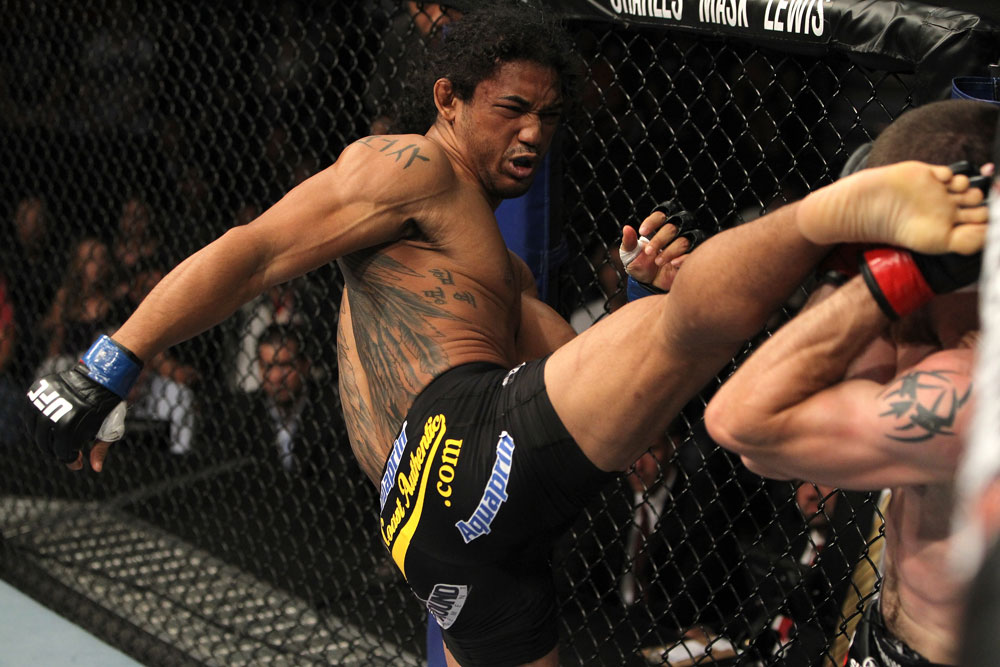 Sounds like something that would come out of the mouth of Clay Guida. But it’s not. Instead, the man speaking those words is Guida’s opponent this Saturday night in Anaheim, lightweight contender Benson Henderson. And given the dedication both men have shown to being tougher, meaner, more aggressive, and in better shape than their opponents, the anticipation for their bout is pretty high. That’s not even counting for the fact that the two have won a combined 19 of their last 22 fights, making this a pivotal one in terms of finding the next challenger for UFC lightweight champion Frankie Edgar.

But a title shot is something that’s on the horizon for these two 155-pound standouts. The only thing that matters right now is Saturday and a fight that is expected to be an old-fashioned 15 minute war with enough sweat, spit, and hair flying around that ringsiders should be given ponchos. And that’s a night out Henderson will never turn down.

“I’m gonna continue doing the exact same thing I always do,” he said. “Clay has good cardio, we all know that and we’ve seen him go for a long time, but my goal, as in every fight, is to break him, to make him so tired that he just wants to get out of there.”

On the other side of the Octagon, Guida has gone on record in the past saying that his goal isn’t to break his opponents, but to make them miserable. Henderson can appreciate that sentiment, but he’s sticking to his guns.

“My goal isn’t to make people miserable, my goal is to mentally and physically break them,” he reiterates. “I want you so tired that there’s no way you can keep going. Let’s see who can go longer. Let’s turn the treadmill all the way up to the highest level and see who steps off first. Let’s put some burning coals in our hands and see who lets go first. It’s not gonna be me.”

Those are fighting words, and as laid-back and affable as Henderson and Guida are outside of competition, when the bell rings, they’re as ferocious as fighters come. And while that’s been Guida’s reputation for years, it’s only now that Henderson is getting that same kind of respect from casual fans. Of course the diehards know “Smooth” from his days tearing through the WEC lightweight division, but it’s only been in 2011 that the rest of the world has gotten a dose of the cool contender from Arizona. So how’s it feel to be the “new” guy?

Maybe it’s because the 27-year old doesn’t get rattled by too much, if anything, or because with a body of work that includes a WEC championship and wins over Donald Cerrone (twice), Anthony Njokuani, Shane Roller, and Jamie Varner, he really doesn’t have anything to prove.

Yet even with a stellar reputation in hand as he entered the UFC earlier this year, Henderson fought like he had a point to make in the Octagon, first decisioning Mark Bocek in April, and then snapping Jim Miller’s seven fight win streak in August with an emphatic three round win. And now he’s got Guida and the opportunity to cement his place in line for a shot at Edgar, who successfully defended his crown for the third time in October with a knockout of longtime rival Gray Maynard.

“The Frankie-Gray fight was awesome,” said Henderson of the third bout between the two. “It was a quality, entertaining fight fought at a high pace, and man, what a chin by Frankie. He showed the true heart of a champion and he’s definitely one of the most underrated belt holders in the UFC. It was a heckuva fight and what more can you say that hasn’t been said already? Great job by Frankie and Gray, and it was a thoroughly entertaining fight.”

Now it’s Henderson’s turn, and to get ready for 15 minutes in hell with Guida, he’s enlisted his usual group at the Lab in Glendale, and just as in the aftermath of his win over Miller, he’s not shy about singing the praises of training partners like UFC vet Efrain Escudero, Chris Gruetzemacher, and Yaotzin Meza, among others, all of whom he would like to see join him in the big show.

“These guys are my brothers,” said Henderson, “and we literally beat each other up every day, we make each other bleed, and it’s not easy. Practices are as tough for me as it is for them and I know everything they go through and how much work they’re putting in, and they know how much hard work I’m putting in. They sacrifice a lot for me and I sacrifice a lot for them, and I was there once. I wasn’t making any money, it was hard to find fights when you have a good name and a good record but you’re not quite at the UFC level, and I see my guys struggling and having a hard time, and I know how hard they work, and I want good things for them too. And they’re ready for it. I want them to just get a chance, and I’m pretty darn sure people are gonna get wowed by what my boys can do.”

How many athletes, regardless of sport, are going to take their time in the spotlight and shine it on someone else? Not many. But that’s just who Henderson is, and he hasn’t let the bright lights change who he is. And while the free time he used to have isn’t as abundant as it was before as he’s raised his profile in the fight game, he’s not complaining. For him, it’s just part of the job.

“Whether you’re fighting in front of a hundred people in your first couple amateur shows or when you’re fighting for UFC titles, how you prepare should be the same always,” he said. “As far as the media and the interviews, and doing this or doing that, that’s the biggest difference. It’s all a juggling act and you have to be able to balance. NBA players do it, NFL players do it, tennis players have to do the same thing, and you have to be able to juggle all those balls at the same time – training, preparing, making sure you’re eating the right foods and getting enough time to sleep, making sure you’re taking enough time for interviews and to knock everything out.”

That’s a true professional right there, but the great thing about Henderson is that he hasn’t taken to talking in clichés and he hasn’t lost his passion for the sport. If anything, getting closer to a shot at the UFC title has only amped him up even more. So, is he starting to take a quick glance at what may lie ahead for him in 2012? You’ll like the answer, because it shows a fighter thinking not about autograph sessions or the next car he’s going to buy, but about his legacy.

“I do keep an eye on the division and see how guys are going and how they’re progressing, but as far as matchup wise, it doesn’t matter,” he said. “I literally want to have the belt and defend it 20 times. I want to fight everybody in the division. If you’re at 155 after I have the belt, trust me, you’re gonna get your shot, because they’re gonna run out of people to throw at me. I want to run through this division, I want to defeat everybody, and I don’t want to look too far ahead, but that’s the goal.”

“I want to be the best MMA fighter of all-time, hands down, no ifs, ands, or buts about it,” said Henderson. “That’s my goal, that’s what I want to do.”