"I don’t expect fighting at 170 to make that much of a difference for me. I have thought about 170 for a long time and [John Crouch] and I have planned for it. We have sparred with plenty of guys at that weight and I’ve always held my own." - Benson Henderson

There is a kinetic element to the way Benson Henderson operates.
Inside the Octagon, the former lightweight titleholder is all go no slow, moving with a seamless matter of fact conviction that validates the “Smooth” precursor to his name. Yet, where most fighters leave that aggressive push on the canvas following the scrap on fight night, the 31-year-old MMA Lab leader keeps his energetic mindset flowing into the business side of the fight game.

Some compete with money, glory and fame as incentives, but Henderson is a different breed on the current landscape of combat sports. He’s driven to test the skill set his hard work and passion crafted, and he’ll go to extreme measures to do so. It’s an ideology directly linked to the martial arts his talents initially sprung from, and one he’s kept completely intact on his rise to become one of the best lightweight fighters on the planet. 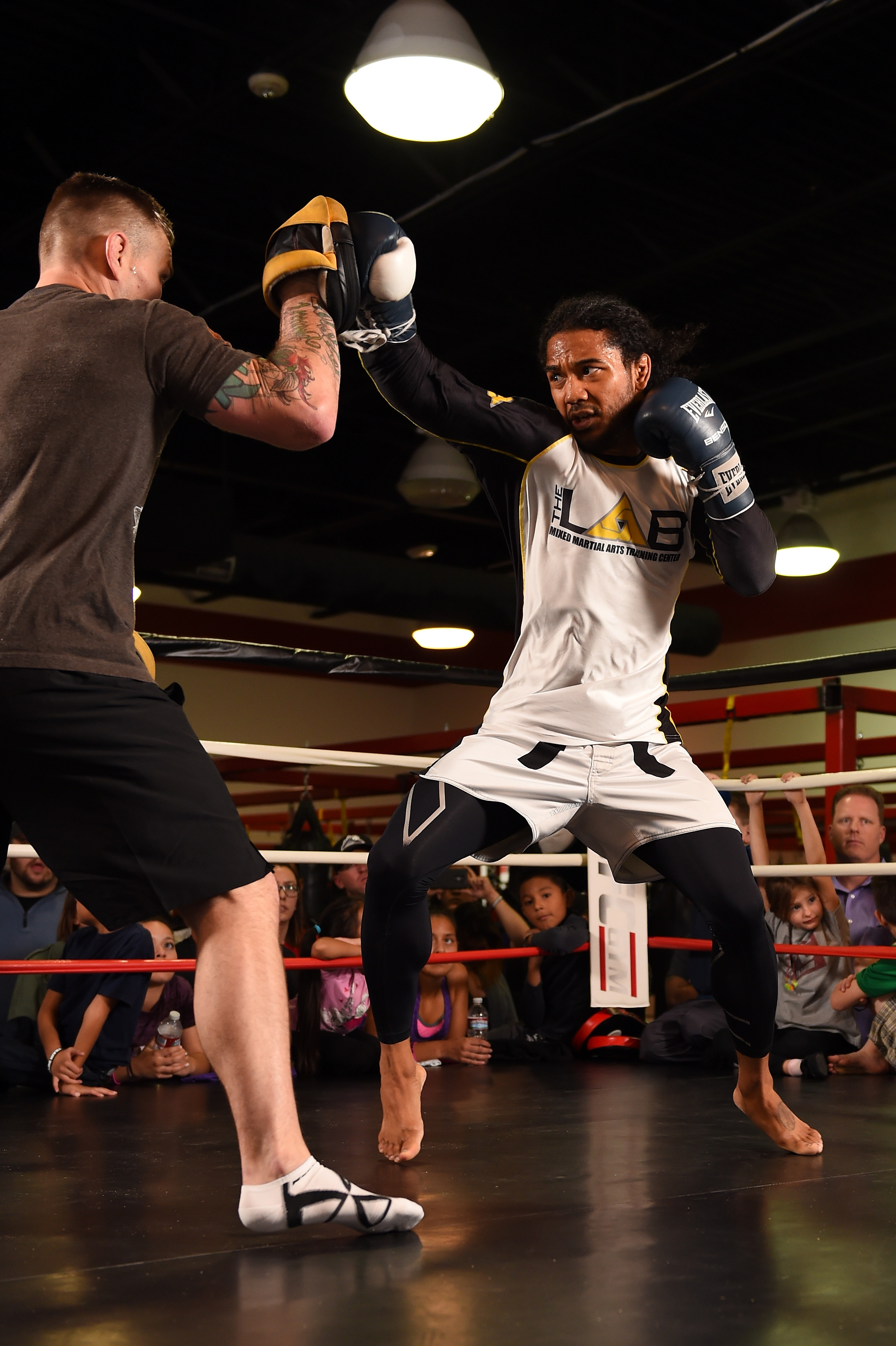 And when a challenge opens up outside of the realm he once championed, well….Henderson is willing to accept that task as well. Much like everything else in Henderson’s world, the proverbial proof is in the pudding and the only way for him to find out what he’s made of is to dive in and see for himself. In his mind, that is the only way to test who he is at the core of his fighting self, and his next obstacle will come at a higher weight class against a fighter who brings an entirely different style to the dust-up.

Where the Glendale-based former champion was slated to face Jorge Masvidal in Fairfax, Virginia on April 4, a new opportunity would arise when matchmaker Joe Silva called during the fight card for UFC 183. Henderson had considered competing in the 170-pound ranks for some time, and the legendary matchmaker wanted to put something on the table for him to consider.

“There wasn’t even a slight pause in my answer,” Henderson said in regard to being offered the welterweight tilt against Thatch. “But with the fight being in Denver at elevation, that is something you have to be aware of. Elevation is another thing all by itself.
> Watch: Benson Henderson: Action & Reaction

By the time Anderson Silva had finished battering Nick Diaz in the main event at UFC 183, word of Henderson’s bold move was starting to spread throughout the MMA community and the consensus opinion of the Broomfield card began to change. Where the event’s original main event clash between Matt Brown and Tarec Saffiedine had fallen apart due to “The Sponge” pulling out with injury, the new main event between Stephen Thompson and “Rukus” became a highly-anticipated affair.

Yet, with “Wonderboy” withdrawing from the bout two weeks out, the UFC was forced to look for someone who was willing to step up and face the upstart powerhouse. Henderson was the man who stepped up to the plate and agreed to take on the surging prospect.

Although Henderson believes he’ll be facing various forms of adversity on February 14, the former WEC and UFC champion is always up to the challenge.
> Watch: Free Fight - Henderson vs. Rustam Khabilov

“I don’t expect fighting at 170 to make that much of a difference for me,” Henderson explained. “I have thought about 170 for a long time and [John Crouch] and I have planned for it. We have sparred with plenty of guys at that weight and I’ve always held my own. I’ve always done pretty well. I think there are pros and cons to it. You definitely give a little bit up in strength, but I don’t think it will be too much. You prepare for that, but you also hope you’ll be gaining that much more of an advantage in speed, quickness and agility.

“You also hope you pick up an advantage in the athleticism department. Guys who are smaller typically have a bit more agility than guys who are heavier. There are pros and cons to it, but I’m hoping the pros are definitely going to outweigh the cons.” 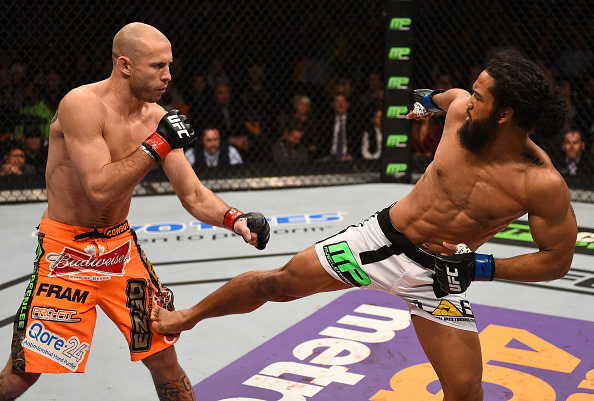 In addition to always being up for a good dust-up, there was additional appeal with the card taking place in his native state of Colorado. Henderson was born in Colorado Springs and chose the “Mile High City” as the place to begin his journey into mixed martial arts. He began training and fighting on the local scene at the same time his close friend and former opponent Donald Cerrone was making his way up on the Denver circuit.

Therefore, when Silva offered Henderson a chance to return to his home state, it wasn’t something he was about to pass up.

“The UFC called and asked me to help them out in Denver,” Henderson said. “If your boss called you up and asked you to do a favor right now, you would do what you could to help them out. That played a factor in it and then you add in the fact that it’s happening in Denver. I love Denver and I’ve fought there a couple of times. I’ve lived there and trained there and it’s somewhere I really like. I got love for the 720 and the 303 and that played a part in my decision to take the fight for sure.”
> Read: Fight Night Broomfield Fantasy Preview

In addition to his jump to welterweight and return to Colorado, another pressing storyline surrounding his short notice fight with Thatch is the looming possibility of Henderson suffering a third consecutive loss. For a fighter who has enjoyed long stretches of success in both the WEC and UFC, his current position of having lost back-to-back showings is certainly something he’s far from used to.

Nevertheless, Henderson has never been one to hang on to past experiences, rather choosing to keep his focus on the road ahead. Personal growth and experience come with every trip inside the Octagon, and Henderson is simply looking for the next big test of his career. 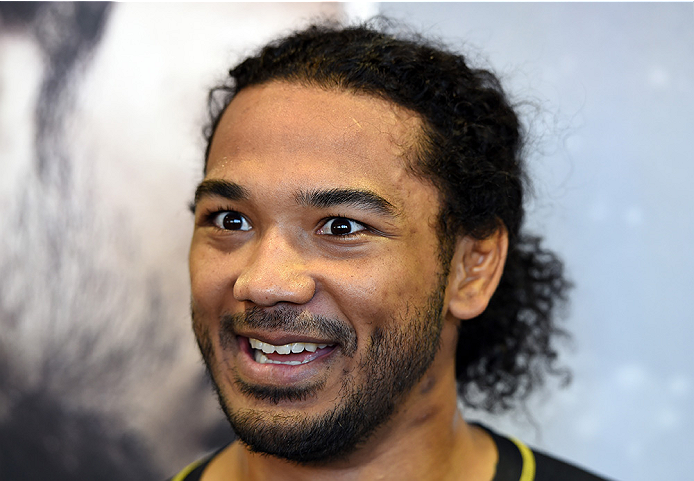 It’s the process of progress and the spirit of competition that keep his internal drive raging. He’s not a man who requires additional motivation because Henderson is always chasing personal improvement. That’s where his focus lies, and his push to succeed keeps the future illuminated and the past resigned to a place he can return to long after his time inside the Octagon is done.

“I’m not one to focus on the past because I’m always looking at the next step,” Henderson said. “This fight potentially being my third loss in a row really never occurred to me until I was doing an interview with someone recently and they brought it up. I replied, ‘Oh…you’re right. This would be three losses in a row. That would kind of suck,’ but that’s not in my mindset at all. It never even occurred to me until it was brought up by a reporter.

“I’m not thinking about that at all. I’m thinking about going in there and beating the tar out of Brandon Thatch. I’m not at all happy with the way my last two fights have ended. I’m not going to say they have provided any extra motivation or anything like that, but I’m definitely excited to be getting back into the Octagon. I’m excited to get in there and beat somebody up.”