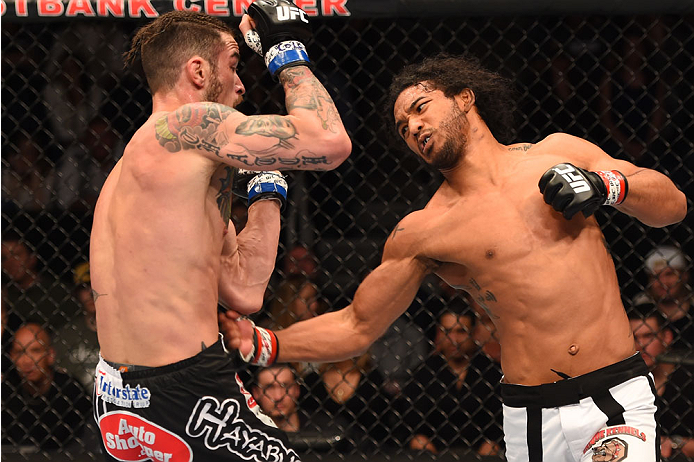 Benson Henderson already has a fitting nickname that he’s carried with him throughout his UFC career. “Smooth” not only embodies the way the former lightweight champ moves inside the Octagon, shifting between phases and never looking rattled, but it also speaks to the 32-year-old’s mellow nature and the down-to-earth, approachable personality he displays outside of the UFC cage as well.

It works, and while there are no plans to change his nickname, Henderson’s approach to the game might prompt him to switch monikers at some point in the future.

If you’re ever on Twitter in the seconds after it is announced that a fighter in either the lightweight or welterweight divisions has been forced out of their upcoming fight, you’re sure to see Henderson offering up his services with a familiar hashtag - #Huckleberry – a nod to the classic “I’m your Huckleberry” delivered by Val Kilmer as “Doc Holliday” in the film Tombstone.

It’s to the point now that other fighters are getting in on the act and volunteering the proud new father for fill-in duty, as was the case when Cathal Pendred suggested Henderson would be picking up the phone to inquire about filling in for Joseph Duffy when the lightweight headline was forced from his bout with Dustin Poirier days before the October event in Dublin.

As you would expect, Henderson was game, responding that he’s always wanted to go to Ireland and that was available if needed.

Given how frequently he’s raising his hand in hopes of getting called to step in on short notice, officially changing his nickname to “Huckleberry” might not be a bad idea.

“I like it. That’s pretty awesome,” Henderson laughed Tuesday evening when presented with the possible new handle. “Benson ‘Huckleberry’ Henderson – that has a good ring to it.”

Much like his actual nickname, the possible substitute sobriquet is rooted in reality as well.

While many fighters swear they’ll fight “anyone, anywhere, anytime,” Henderson legitimately means it and isn’t joking when he volunteers to step in at the 11th hour whenever a fight falls through.

When Stephen “Wonderboy” Thompson was forced out of his main event pairing with Brandon Thatch, there was Henderson, happy to trade in a signed and scheduled fight with Jorge Masvidal in early April for a last minute opportunity to face a rangy knockout artist on a 10-fight winning streak where none of the bouts made it beyond the opening five minutes.

In a five-round fight.

Though that was the only time the UFC has taken Henderson up on his frequent offers to serve as a late notice replacement, his genuine willingness to square off with whoever, whenever is on display again this weekend when he finally shares the Octagon with Masvidal in the main event of Saturday’s debut fight card in Seoul, South Korea.

Originally scheduled to face Thiago Alves, the former welterweight title challenger was forced to withdraw from the bout two weeks prior to the event, momentarily leaving Henderson without a dance partner. Masvidal, who was slated to face Dong Hyun Kim, stepped up and Henderson had no hesitation in agreeing to trade shots with the tough American Top Team representative who has similarly made a move up in weight to compete in the 170-pound ranks after cutting his teeth in the UFC as a lightweight.

“I’ve always been that way; it’s not new for me,” Henderson said of being someone who is always at the ready, eager to step up whenever his name is called. “But when you’re climbing the ladder to fight for a title and then when you’re defending the title for so long, I wasn’t allowed to take this fight because I have the belt, so I couldn’t take a fight if somebody gets hurt and step in there, blah blah blah, but I’ve always been that way. It has always been my mentality. Nothing has changed.

“I’m always in the gym, I’m always training, I’m always working my butt off,” he added. “If they need somebody on two days’ notice, one day notice, well guess what? I’m ready. I’m good to go, especially going up a weight class to 170. I can make the weight on a day’s notice, no problem. I’m a company man, so give me a call.”

For Henderson, who picked up a fourth-round submission win over Thatch in his UFC welterweight debut back in February, being in that constant state of readiness and hungry to jump regardless of how little prep time he’s afforded all comes back to preparation.

He explains it like taking a test in high school or college, a situation almost everyone is familiar with.

When you’ve studied and know the material, and can anticipate what the questions are going to be and have your answers down, you’re not worried because you know you’re fully prepared. But when your preparation is lacking, that’s when panic sets in and those are normally the tests that most people don’t do well on.

Unlike his days in the classroom, Henderson refuses to be ill prepared for the tests he faces in the Octagon and won’t be satisfied unless he’s making straight As.

“For me, it always boils down to preparation and I’m always prepared and I pretty much generally expect to ace all my tests. When I was in high school and college and stuff, I had a lack of preparation, so I was okay with getting by with Bs and Cs no problem; as long as I graduate, as long as I stay above a 3.0, I’m good to go.

And once he’s done, it’ll be back to the gym, back to the grind and back to raising his hand every time a fighter drops out of a fight, hoping that his phone will ring.