Read on for the latest installment in UFC.com's weekly series of articles on proper nutrition from the biggest names in mixed martial arts...this week, Benson Henderson 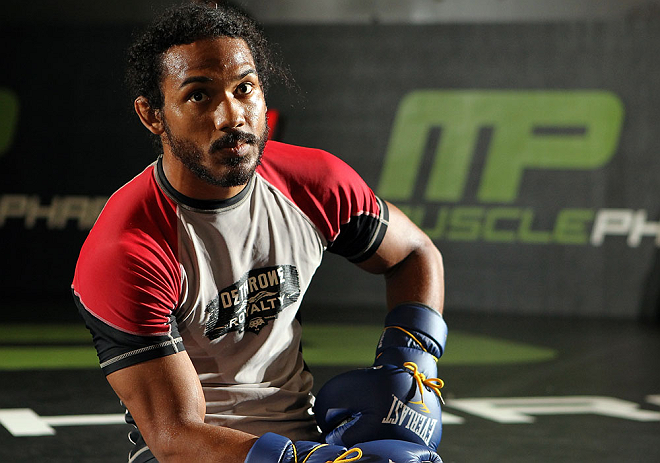 He’s never tasted a drop of alcohol. Never took drugs. He shuns the nightclub scene on Saturday nights in favor of the neighborhood book store.

Benson Henderson, for all his life, has been a straight-laced person who loves reading Biblical scriptures, and immerses himself into books and the martial arts. The reigning UFC lightweight champ, who clashes with Nate Diaz on Dec. 8 (UFC on FOX), is a renowned gym rat; FOUR-A-DAY training sessions are the norm on his schedule. So how does this 29-year-old specimen fuel his world championship frame? “Smooth” discussed the diet that has anchored his rise as one of the sport’s most ultra-aggressive, well-rounded and insanely conditioned fighters. If you’re a sucker for Korean barbeque, stick around …

UFC: Growing up, what were some of the staples of your childhood diet?

Henderson: Coming from a Korean household we had rice for breakfast, lunch and dinner! It would be white rice and some sort of meat – beef or pork. We ate a lot of kimchi, stuffed cabbage, spiced cucumbers or spiced turnips, that kind of stuff.

I had a roommate from Korea back in college and was fascinated that he would eat kimchi for breakfast ..

How much has your diet changed over the years? How frequently do you get to eat some of your favorite Korean foods?

I eat Korean food a couple times a week. My mom sends me big huge jars of kimchi and that lasts a couple of months and then she brings me more. My mom is a great cook. She sends me already-made food and all I do is throw it on the stove and heat it up. So it looks like I’m cooking when someone sees me eating and they say, ‘Ah, Henderson, man, you made that?’ I’m like, ‘Oh, yeah, I made it, I cooked it up!”

For people not familiar with Korean food, you go to a Korean restaurant and we’re talking about some huge meals … some serious throwing down. You could easily go eat Korean for two and drop $100 easy at a good place. Do you get to indulge in those big Korean meals very often?

Yes, traditional Korean meals serve LOTS of food, so I definitely can’t do that. I have to stay away from having my (preferred) four, five or six bowls of rice and pork or beef and all that good stuff. But when I’m not in training camp I will definitely indulge myself.

I am well aware that you train FOUR times a day. That is mind-blowing to a lot of people – pro fighters included – who think that much training could lead to overtraining and injuries. What convinced you that working out four times a day would be advantageous? How long have you been doing it and how often do you eat to pull that off?

It just takes practice. There are so many arts to master in mixed martial arts so you have to make time to learn it all. Of course it’s tough, of course it’s hard, it’s not supposed to be easy!

I’ve been doing four-a-days three or four times a week since the very beginning. I might start the day with my strength and conditioning coach, then have a private with my boxing coach or Muay Thai coach. I have a blended arts standup coach and then I need to work with my Brazilian jiu-jitsu instructor and head coach, John Crouch. There are not enough hours in the day to do as much practice as I would like to, but I do the best I can.

My meals during the workouts on those four days are smaller. You obviously can’t have large meals and practice on a full stomach. I eat one hour before my workouts and within an hour after my workouts. I eat eight meals a day, really small meals, but I’m constantly feeding my body.

I usually eat oatmeal and egg whites for the first meal and maybe a slice of double fiber whole wheat toast. Throughout the rest of the day it’s pretty much brown rice, chicken breast … sometimes I’ll switch it up and have ground lean turkey or fish. I’ll also add some veggies.

Tell us a little more about the philosophy behind your aversion to supplements?

I’ve just never taken any supplements. It’s not because of anything I’ve read or heard, it’s just my own personal preference. It’s just something I don’t want to do.

Nighttime eating … what’s the latest you allow yourself to eat?

Who taught you the most about diet?

For me it was a lot of trial and error. When you’re younger you can get away with a lot of stuff and as you get older you have to be smarter about it. My college wrestling coach (at The Blair College in Nebraska) taught me a lot about diet and nutrition. Not too long ago I hired a nutritionist who worked with me for about three or four fights. He helped me out a ton.

Are you still working with a nutritionist?

No, not now. He gave me a ton of knowledge and that’s what I wanted. I still use a lot of the information that he gave me.

Do you have a preferred meal you eat after weigh-ins or before your fights?

No, I don’t let myself think like that. I can’t be thinking, ‘Hey, I want lasagna … Well guess what – you’re in Japan, you can’t have lasagna!”

Now I do have a post-victory meal. As much as possible I try to hit up a Korean barbeque restaurant because that’s my stuff!