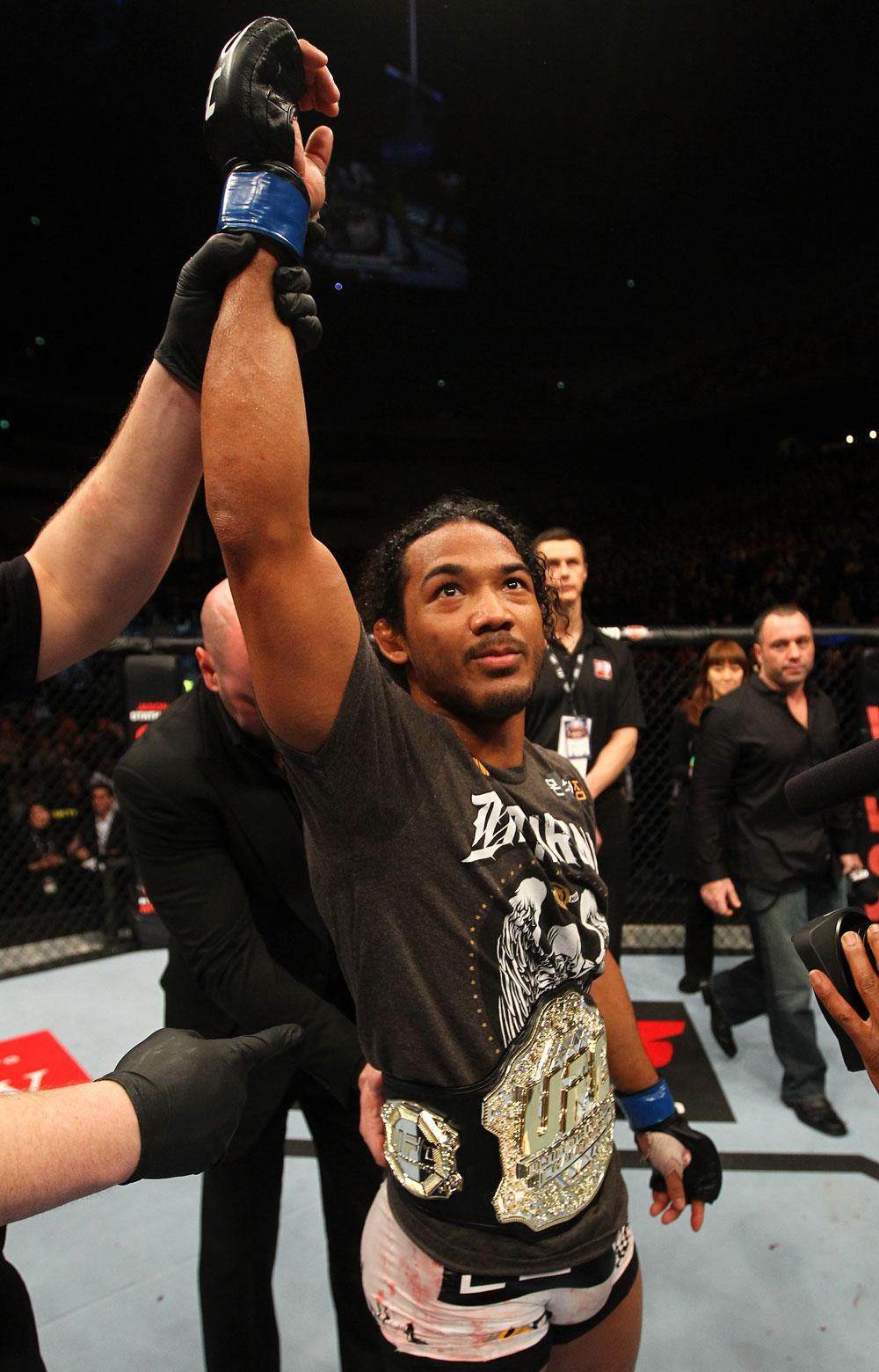 Here’s the difference between Benson Henderson and the rest of us. The week after winning the UFC lightweight title should have been a time for the Arizonan to be taking his victory lap, blowing up to middleweight on a steady diet of food not meant for world-class athletes, and generally living it up.

Instead, the newly crowned titlist, one weekend removed from winning a five rounder over Frankie Edgar at UFC 144 in Japan, was back in action, competing in the Arizona International Open jiu-jitsu tournament. As a brown belt he took first place in the middleweight division and third in the absolute class, but the results really don’t matter – not in the great scheme of things and not to Henderson. It was all about getting out there and doing it.

“I’ve done that after all my UFC fights,” he said, almost matter-of-factly, as if it’s no big deal to be back competing just a week after a grueling five round MMA fight. “It just so happens, coincidentally, that there’s always a jiu-jitsu tournament the weekend after I get back. I like to compete, I like to have fun, and it’s a nice little break for me being able to compete and the world isn’t on the line, like ‘You have to win, it’s all or nothing.’ If I lose, big deal; I get caught in an arm lock, yeah, okay, I lost, but I had fun competing.”

It’s a pleasant reminder that while this is prizefighting and a way to make a living and a business, there are still fighters out there who embrace the martial arts aspect of the sport, and that still look at getting better as the greatest reward.

“I don’t need the spotlight on me,” said Henderson. “I love to compete, I love the competition aspect of life, and I love the martial arts aspect of living and constantly improving and bettering yourself and not getting complacent. I’m trying to get better, even if it’s the weekend after a fight. I’m trying to have fun, go compete, and improve whatever realm I’m in.”

That attitude allowed Henderson to sail to the top of the WEC’s lightweight division in 2009-10, and in less than a year in the Octagon, he’s done the same in the UFC, defeating Mark Bocek, Jim Miller, Clay Guida, and Edgar to ascend to the throne. And in typical Henderson fashion, he defeated Edgar in a close and exciting battle that left no fan disappointed. Well, maybe Henderson, who, as a perfectionist, would have liked to end the bout with a flourish.

“My take on the fight is that it was a good scrap, but I definitely think I could have done better,” said the 28-year old, who earned the belt via scores of 49-46 twice, and 48-47. “I left some holes out there and didn’t quite get the finish that I wanted, but it was a good scrap.”

“Good scrap” is an understatement, and it’s the reason why Henderson and Edgar will meet up again later this year for a rematch. And that’s just fine with the new champ.

“Let’s run that back, let’s do it again,” he said. “In my eyes, I don’t really see myself as one of those primadonna wide receivers: “I want this, and this has gotta happen.” I represent the UFC, I’m the 155-pound guy right now, and even if you don’t have the belt, it’s not about you calling some guys out. To me, that’s kinda tacky and disrespectful. It’s Sean Shelby, Joe Silva, and Dana White’s job to put somebody in front of you. Whoever they put in front of me, I will beat up. It doesn’t matter. My job is not to match myself up and call this guy or that guy out. I’m not gonna go on Twitter and make my own match. Some guys are into that and that’s the way they want to pursue their career, and they can go right ahead. My job is to beat people up.”

Henderson takes that job seriously, and if you didn’t know that from a WEC career that saw him face Anthony Njokuani, Shane Roller, Donald Cerrone (twice), Jamie Varner, and Anthony Pettis, you can certainly see it in his UFC resume thus far. Simply put, Henderson doesn’t back down from a fight, and when he says that as champion he wants to fight everyone, it’s not a catchy quote; it’s reality. And while he knows it may take some time for the rest of the world to catch on, he’s willing to put in the time to make sure everyone knows that he’s not a talker, he’s a doer.

“I definitely don’t want to get too far ahead of myself,” he admits. “People seem to think that I’m arrogant or cocky, and I don’t want to come across like that. I’ve said it from the very beginning that I want to be the best fighter and I want to fight and beat everybody. It’s not me looking ahead and being cocky all of a sudden like, oh, I beat Frankie Edgar and now all of a sudden I’m gonna smash everybody. I was saying this from the beginning. I’m as confident as any other fighter on the UFC roster. I’m a very confident fighter and all fighters are, or they should be. I want to fight everybody on the roster at 155, I want to beat ‘em all, and I want to have a nice long reign at 155. I’ll do a Bernard Hopkins or Joe Louis. I want to make 155 my weight class and I want my name to be synonymous with it. I think that would be something special.”

Considering that boxing greats Hopkins and Louis each reigned for over a decade, that would be something pretty special, but Henderson is up for the challenge. And though it remains to be seen, his eventual impact may turn out to be greater outside the Octagon than in it, as he’s a many-layered individual with interests and a back story that goes far beyond what is seen as typical these days. As I wrote of Henderson back in the WEC days, “In a world of black and white, WEC lightweight contender Ben Henderson emerges in Technicolor.”

Nothing has happened since to dispel that notion. If anything, he’s turned into an even more compelling figure to watch. But he’s not about to change under the bright lights. He’s still Benson Henderson. He just has more people paying attention these days.

“It’s not something I really thought about until later on, until I started to realize that I’m on a much bigger platform to get the things that I talk about and bring up and love out there,” said Henderson, a self-proclaimed comics, sci-fi, and fantasy junkie who is also a devout Christian. “But I don’t want to be the guy who just does all that stuff just for the sake of doing it. I want people to know that it’s okay to be a comic book nerd and still go beat people up. (Laughs) But the thing I want to be adamant about is being a Christian and being that guy for some kid who always hears about it from his grandmother but doesn’t give it any serious thought; now he can hear about when he’s watching Pay-Per-View and then go ‘yeah, maybe I’ll listen to this.’”