Benson Henderson: The Art of War

"In the Octagon I can allow myself to be a little bit freer and not hold
myself in check. I’m excited to step into the cage and let
go. I want to show out." - Benson Henderson 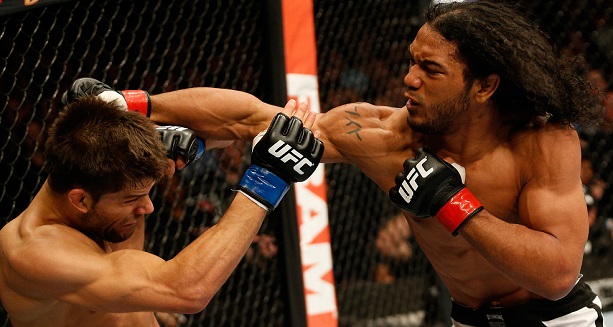 As the UFC’s undisputed ironman, Benson Henderson may be the fighter best equipped to travel back in time to the early UFC days and compete in bouts with no rounds or time limits. But when it comes to no rules, well, that’s a different story.

“My hat’s off to those guys,” said Henderson of the early pioneers of the Octagon. “I wouldn't mind a no time limit fight, but some of those other rules, I am man enough to admit that I am not man enough for no rules. (Laughs) Those were some brutal fights.”

If you’ve seen the former lightweight champion in action, you get the impression that he would do all right though. A man who has been the five-round distance seven times in his nearly eight-year pro career, winning six of them, Henderson is that fighter who isn’t afraid to go where most dread. That’s a badge of honor to him.

“If we can make our fights a battle of attrition, I love those fights and I know I’m going to come out on top,” he said. “We’re working on developing that Johny Hendricks big left hand, and it’s a work in progress, and we’re also working on being good enough to take the submission right away if someone gives it to us and all that stuff. But we are very comfortable in wars of attrition, and in a fight like that, I know I’m coming out on top. No one’s going to outlast me for five rounds at a hundred miles an hour. Let’s go, let’s do it, let’s find out how good you are.”

That sounds like a challenge for Henderson’s opponent in the UFC Fight Night main event this Saturday in Albuquerque, Rustam Khabilov, but that wouldn’t necessarily be the case. “Smooth” is no trash talker or proclamation maker; he just knows that when the going gets tough – and in his case that’s going into rounds four and five – few can hang with him. 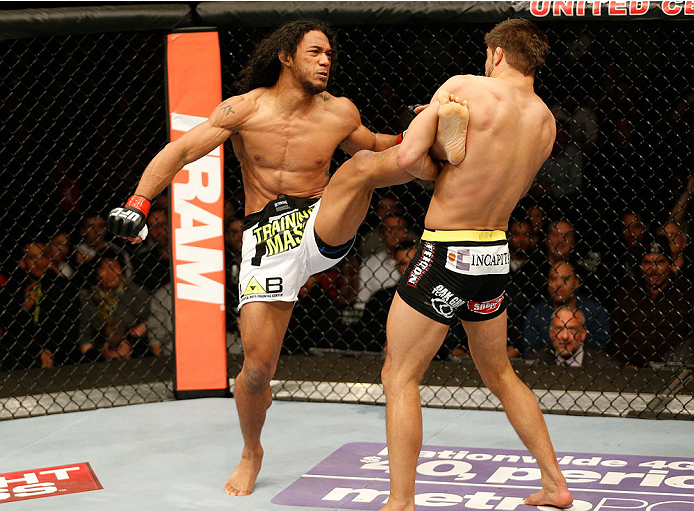 In January, Henderson dug into his bag of tricks, went five rounds with Josh Thomson and scored a close split decision victory. In other words, it was business as usual for the Arizona product, who got back to his winning ways in his first fight since losing his 155-pound crown to Anthony Pettis in August of last year. And just like that, the stars were aligned and everything was well in the universe again.

And with Pettis and Melendez meeting as coaches on the upcoming Ultimate Fighter 20 before settling their own business afterward, the number two-ranked Henderson will have to keep fighting and winning before getting a shot at the winner. That’s where Khabilov comes in, and the suplex master from Dagestan is no easy out.

“His wrestling his tough,” said Henderson of his foe. “And our camp believes the thing with his stand-up striking is that he doesn’t mind getting into a clinch. So it’s hard when you fight guys who don’t mind going into a clinch. If you want to have a stand-up war, we can have a stand-up war; if you want to wrestle, we can wrestle - choose one or the other. But then you have guys like Rustam and myself, who are pretty similar in the aspect that we will strike with you and throw really hard strikes, and if we have to get tied up, that’s okay, because we’re comfortable in a close, tie-up wrestling range. Rustam is definitely that way. He doesn’t mind being there at all, and if you let him lock his hands, you’re probably going to go for a ride.”

|| UFC FIGHT PASS: Watch about a dozen Ben Henderson fights only on

Sounds like two mirror images will be meeting n Albuquerque this Saturday, and if that’s the case, is this a Fight of the Night in the making?

“I like the Fight of the Nights, they’re cool and all, but I’m okay with getting my hand raised, and I’ll do a Performance of the Night for sure,” said Henderson. “I’m gonna have a great performance on June 7.” 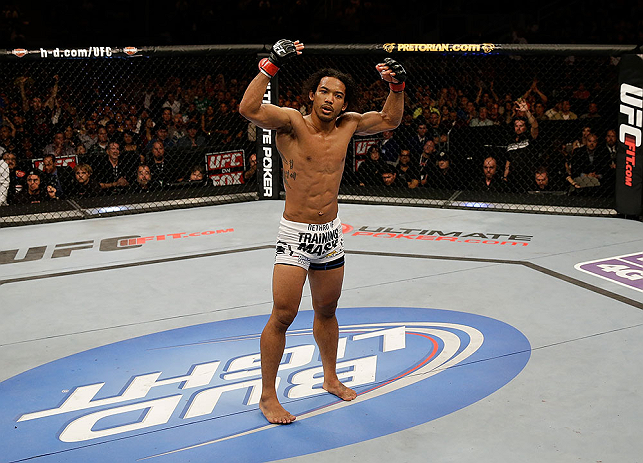 If so, it would be one of many he’s put together both in the UFC and WEC, yet some still criticize the 30-year-old for being without a finish since he submitted Donald Cerrone in their 2010 WEC rematch. Of course, since that bout, Henderson been in Fight of the Night battles with Pettis, Clay Guida, and Frankie Edgar, with notable wins over Jim Miller, Nate Diaz, and Melendez added in for good measure.

“I wouldn’t say I get a bad rap exactly,” he said. “I think anytime you have a squeaky wheel, the squeaky wheel gets the oil, so out of a hundred people, ten of them happen to say ‘oh, but your fights go to a decision.’ Yeah, but they’re pretty darn good fights and they’re pretty entertaining and I’m getting my hand raised. But for whatever reason, with today’s social media, those ten people are going to be screaming their heads off. But the majority of my fans, based on the reception I get after fights and before fights, 95% is positive and I enjoy it and I appreciate it. I’m doing my job, and I’m doing the best I can.”

Few do it better. So while flash is fun, you have to respect those who go in there and win by sheer sense of will and stamina. That’s old school, and in its own way it’s an art – Benson Henderson’s art.

“In the Octagon I can allow myself to be a little bit freer and not hold myself in check,” he said. “I’m excited to step into the cage and let go. I want to show out.”