Bennett happy to have flyweight be her new home

Where does DeAnna Bennett come from?

And what a beautiful thing that is. Whether she’s joking with friends, sparring with detractors on social media or doing Gilbert Gottfried impressions (don’t ask), the 33-year-old isn’t just a breath of fresh air for the UFC’s new flyweight division, she’s a hurricane of positivity that just isn’t seen too often in any walk of life these days.

It’s why when the woman who is going to be trying to punch her in the face tonight in Las Vegas, Ultimate Fighter castmate Melinda Fabian, was asked her thoughts on Bennett for her UFC bio, she simply wrote that her opponent is “An excellent 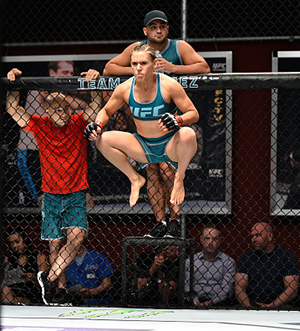 athlete and an excellent person.”

That was the consensus coming out of TUF 26 when it came to Bennett, and that’s not easy because the world of reality television can be an unwieldy beast sometimes, and “Vitamin D” knew it.

“I was real nervous going into the show,” she said. “I was like, ‘Everyone’s gonna hate me.’ And my teammates were like, ‘DeAnna, it might take them a couple weeks, but they’ll come around to you. You’re endearing.’ No, I’m weird and awkward. (Laughs) But I was actually amazed at how positive people were about the show. And that people liked me for me was kind of a load off my shoulders because I was real worried about that.”

She shouldn’t have been, because if someone is not taken in by her personality within seconds, they’re probably just angry at the world. It doesn’t hurt that she can fight too, and that’s the reason why she’s in Vegas, ready to make her UFC debut after making it to the quarterfinals of TUF 26.

And if fans were impressed by her win over Karine Gevorgyan before she was halted by Sijara Eubanks, expect to see even more from the former Invicta FC standout, as she’s spent her entire training camp in New Jersey with the Ricardo Almeida BJJ and All-Star MMA teams. That’s a big switch from Utah, but she’s more than happy with the results.

“Sarj (Eubanks) was my favorite training partner on the show and now I get her as a training partner here and she’s my really good friend,” Bennett said. “I feel like in the last two months I’ve become ten times the fighter that I was beforehand and grew more than I have in those two years.”

She may not be leaving either, as she’ll be helping out fellow UFC fighter Katlyn Chookagian with her camp, and it’s evident in the tone of her voice that she’s adopted the Garden State as her own.

“You do crazy things when you love the sport,” she said.

For Bennett, one of those crazy things was turning an 8-0 pro record that included a win over Julianna Pena into an 8-3 slate when she took a run at the strawweight division in 2016-17. And after missing weight for a split decision loss to Jodie Esquibel in March, she finally hit the wall at 115 pounds.

“I had been struggling and trying to get down there, and after my fight in March, which was supposed to be 115 and I didn’t make weight, I talked to (Invicta FC President) Shannon Knapp and she said, ‘You’re a flyweight.’ I said, ‘I know, I need to be.’”

Luckily, tryouts at 125 pounds for TUF provided a new opportunity for Bennett to not just re-establish herself at flyweight but to compete in a tournament that would crown a new champion. She didn’t get that title fight, but she did get a spot on the UFC roster, and along the way, she made some friends (no surprise) and saw where she stacked up in the division.

Eddie (Alvarez) and the other coaches we had told me that physically, I was unnaturally strong. That’s cool because I never really realized that. And now, focusing more on the training and being able to switch my mindset has been huge because it means I can learn more and I can do more techniques instead of just focusing on the weight. 125 is my home and I feel strong there. I never see a reason to go back down to 115, and thank goodness for everyone around me, I will never do that again. (Laughs) I feel comfortable at ’25 and I’m happy there.”

Happy, positive, friendly with her opponent. You may think that’s not conducive to getting into a fistfight, but Bennett disagrees, noting that when it’s time to fight, she’s always ready to go.

“It’s all part of the competition,” she said. “I have a hard time taking myself seriously outside of the cage, but I take fighting seriously and I take the competition seriously. And the best thing you can do to honor your opponent, especially if they’re a friend, is to give them the best damn fight that you can and not hold back. Feeling the emotions in the cage and knowing you’ve done everything to build up to that point, that’s the trigger for me. Game mode. Let’s go do it.”