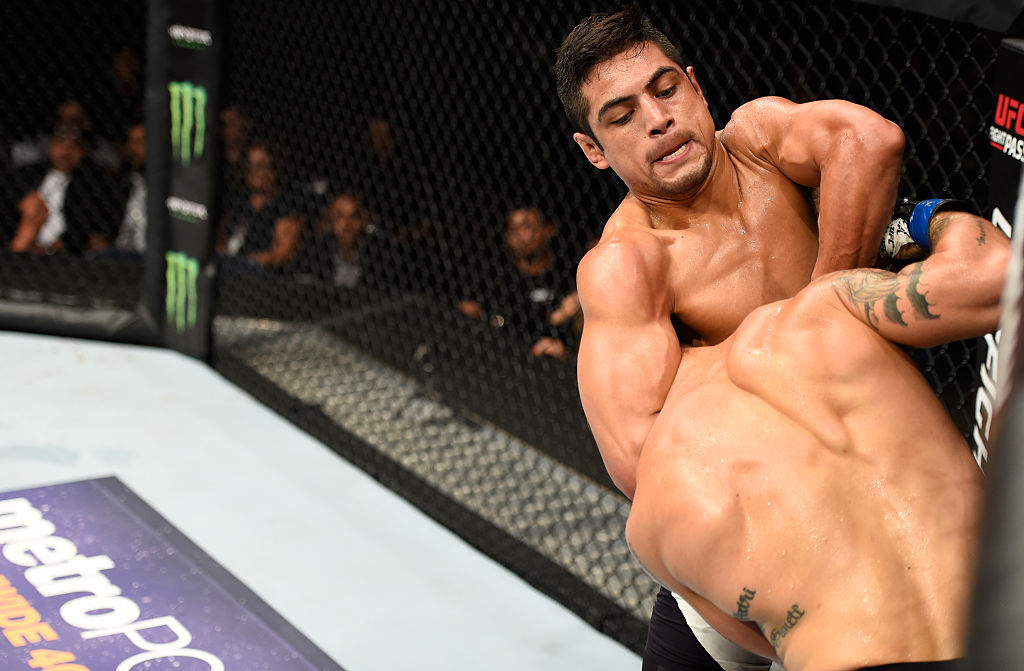 Mexico’s Gabriel Benitez was on top of his game from start to finish in his featherweight bout against Sam Sicilia on Saturday, as he submitted the knockout artist in the second round at State Farm Arena in Hidalgo, Texas.

The first round was an exciting one, each fighter taking turns getting their shots off, Benitez mainly with his kicks, Sicilia with his fists.

Thirty seconds into round two, Benitez’ fists made their presence known as he knocked the Spokane product down, but Sicilia was able to elude any further danger, at least for a few moments, as a subsequent takedown attempt resulted in a guillotine choke from Benitez that ended the fight at 1:20 of the second frame. 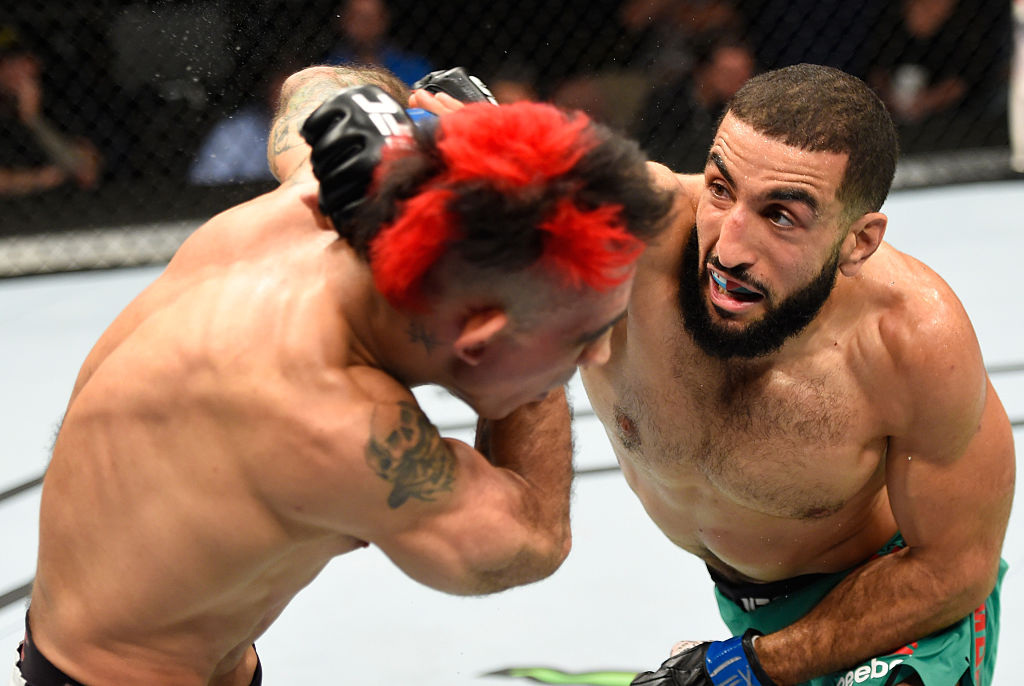 Welterweight prospect Belal Muhammad got his first UFC win in his second try, stopping Augusto “Dodger” Montano in the third round.

Chicago’s Muhammad (10-1) fought at a patient pace in the first round, and he landed several hard punches and kicks, having more issues with an eye poke and low kick from Montano than with the unorthodox stylings of the Mexico City native.

Montano (15-3) was having success with his kicks to the leg, but Muhammad kept pushing forward, scoring a takedown in the second minute of round two. Midway through the round, Muhammad took Montano’s back, but the Mexican veteran battled his way out of trouble and back to his feet.

Muhammad got the takedown once more in round three, and he took the back again before Montano escaped and got upright. “Dodger” was visibly winded, but he kept moving forward, and that recklessness led to another takedown. This time, Muhammad opened up with his ground strikes, and after a series of unanswered blows, referee Herb Dean had seen enough, stepping in to stop the fight at the 4:19 mark. 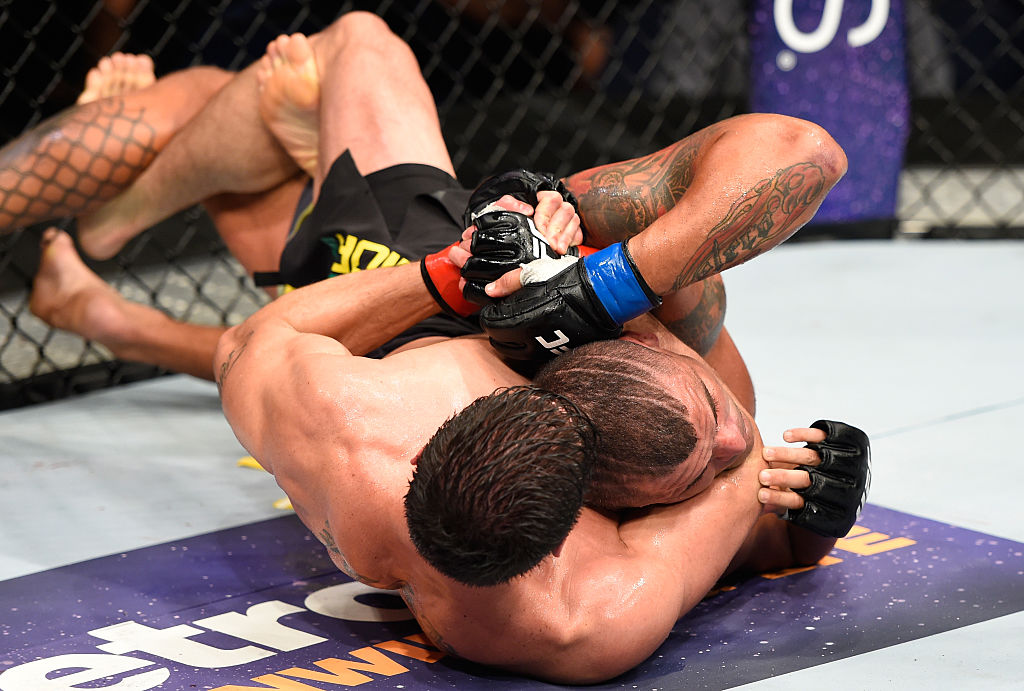 In a clash of Brazilian middleweights, Antonio Carlos Junior fought a patient and effective fight, eventually submitting Leonardo Augusto Leleco in the third and final round.

The first round was largely tactical, with the most significant action being a borderline knee from Carlos to the head of the downed Leleco, drawing a point deduction from referee Jacob Montalvo. Carlos did score a takedown after the deduction, likely salvaging at least a draw on the scorecards for the round.

Carlos got the bout back to the mat early in round two, and he kept Leleco there until the final minute. In between, Carlos landed several right hands as Leleco did little but take the shots, making it a big round for the former TUF Brazil 3 winner.

Continuing to press in the final round, Carlos kept Leleco on the mat, and as the clock wound down, he sunk in the rear naked choke, forcing Leleco to tap out at 4:46 of the third. 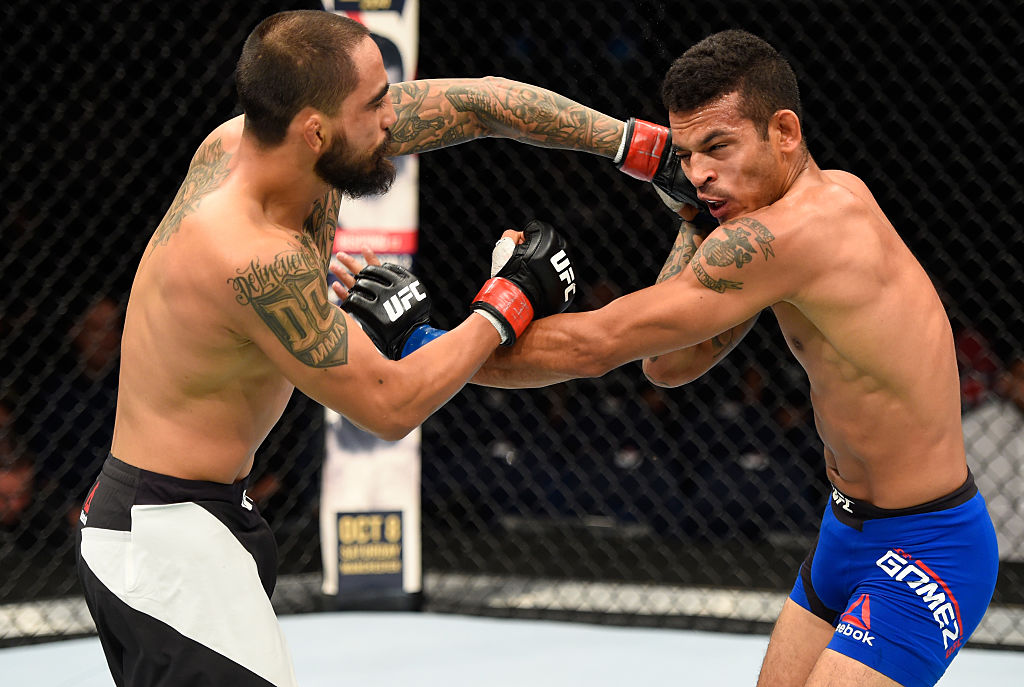 Jose Quinonez’ first bout since June of 2015 was a victorious and impressive one, as he scored a near-shutout three-round unanimous decision over Joey Gomez in a bantamweight matchup.

Quinonez scored two takedowns in the opening minute of the fight, but Gomez rose quickly after each. Quinonez was undeterred though, and he kept the pressure on, scoring another takedown with a little over three minutes remaining. Gomez got back up again, but Quinonez was dominating the action, knocking the Temecula product down in a subsequent exchange.

It was more of the same in the second until Gomez rattled Quinonez and then dropped him with a left hand just before the midway point of the round. Quinonez recovered quickly and the two engaged in some heated exchanges before the end of the frame.

A knee in the second minute of round three put Gomez on the deck, adding to Quinonez’ lead, and “Teco” kept pressing as he looked to finish. With 90 seconds left, Gomez was able to get back to his feet, but he was unable to put together a fight-saving rally.