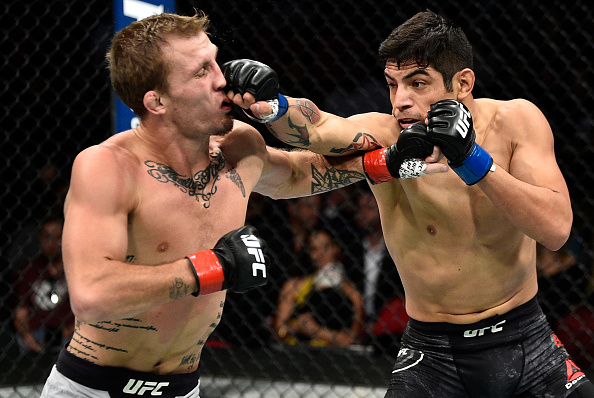 Gabriel Benitez of Mexico punches Jason Knight in their featherweight bout during the UFC Fight Night event inside Save Mart Center on December 9, 2017 in Fresno, California. (Photo by Jeff Bottari/Zuffa LLC/Zuffa LLC via Getty Images)" align="center" />
BENITEZ vs KNIGHT

Mexico’s Gabriel Benitez scored the most important win of his UFC career, upsetting No. 15-ranked featherweight contender Jason Knight via unanimous decision in the UFC Fight Night co-main event at Save Mart Center in Fresno.

Knight (20-4) shot out of his corner as the fight began and put the heat on Benitez (20-7), briefly staggering him with a right hand. Benitez smiled, yet as he defended a takedown, referee Mark Smith halted the bout as Benitez got bit by Knight, prompting a point deduction that Knight didn’t dispute, saying it was accidental. When the action resumed, Benitez landed a head kick and Smith looked to get the bout to the mat. It went there, but it was Benitez landing on top. With a little over two minutes left, the fighters stood and Benitez stuck to his disciplined fight attack.

Knight got a takedown in the second minute of round two, Benitez rising immediately. The two went back to the mat seconds later, this time with Benitez on top. Benitez stayed sharp in the standup, but an eye poke by Knight against halted his momentum. When the fight resumed, it was back to business for “Moggly,” who apparently had a solid lead heading into the final round.

Putting the pressure on, Knight tried to turn things around in the final frame, but Benitez’ stick and move strategy was working to perfection on his frustrated foe, who was a step behind all night against the Tijuana native, who scored an impressive win via scores of 30-26 twice and 29-27.

Stepping in for the injured Rani Yahya on short notice to face Aljamain Sterling, Brazil’s Marlon Moraes made a statement to the rest of the bantamweight division with a stirring first-round knockout that gave “Magic” his second win in less than a month.

Moraes was busy with his strikes as the fight began, with one exchange putting Sterling on the deck. A wild sequence followed, with Moraes throwing ground strikes as Sterling nearly locked up an arm. Moraes pulled free and the two stood, but as soon as they squared off again, a flush left knee to the head by Moraes ended the fight via knockout, with referee Michael Bell immediately stepping in at the 1:07 mark as the New Yorker fell to the canvas.

Scott Holtzman picked up his second consecutive win in a lightweight bout, scoring a shutout three-round decision over Darrell Horcher.

The two 155-pounders engaged in a back-and-forth opening round, trading control on the mat while Holtzman likely pulled ahead thanks to an active striking attack on the feet and the ground.

Horcher (13-3) staggered Holtzman with a left hand in the opening stages of round two, and another one followed moments later, cutting his foe on the nose. Holtzman responded with a pair of takedowns, and despite an active top game, referee Mike Beltran restarted the action with a minute left. Undeterred, Holtzman went back to work with another takedown, and he kept Horcher grounded for the rest of the frame.

Holtzman (11-2) played it smart in the final round, as he continued to use his grappling and ground-and-pound attack to win the round and take the fight via three scores of 30-27.

Perez drew first blood with a takedown midway through the opening round and he nearly locked in a choke, but Anders escaped, got to his feet and went on the attack. Perez took Anders’ shots well and even got another takedown in a wild exchange at the end of the round.

Lopez began landing his left hand with more regularity in round two, even scoring a flash knockdown in the second minute of the frame, and when the fight went to the mat late, Anders began to pull away as he delivered bombs from the top position.

The third was all Anders, and though he didn’t finish, he showed off more aspects of his evolving game against a game foe who will be heard from in the future.

A California turf war was settled in the bantamweight main card opener, as Oroville’s Benito Lopez remained unbeaten in his UFC debut with a three-round unanimous decision victory over Reseda’s Albert Morales.

Fresh from Dana White’s Tuesday Night Contender Series, Lopez (9-0) ran out of his corner at the start and drilled Morales with a kick to the head. Morales (7-3-1) took it well and looked for a takedown, and though he came up short, a left punch to the face put Lopez down briefly. As Morales rushed in, Lopez scored a knockdown of his own with a flying knee. The two then traded punches before another knee dropped Morales, and this time Lopez tried to finish things with a guillotine choke. After some dicey moments, Morales escaped and erupted with a series of strikes before locking Lopez up against the fence. Lopez took several hard shots from Morales, who kept him locked up for the rest of the frame.

Understandably, the pace dipped in the next two rounds, but there were still plenty of entertaining exchanges and shots landed by both fighters, with Lopez the flashier of the two but Morales the busier and more conventional attacker. In the end, it was Lopez getting the nod by scores of 30-27 and 29-28 twice.