Beneil Dariush: No Substitute for Experience 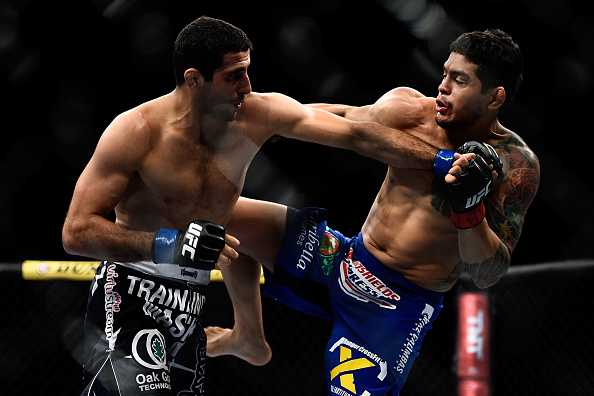 Throughout his third non-fiction book Outliers: The Story of Success, Malcolm Gladwell repeatedly talks about the “10,000-Hour Rule,” where he posits that the key to success in any field is, to a large extent, a matter of practicing a specific task for a total of around 10,000 hours.

While various studies have taken aim at Gladwell’s “10,000-Hour Rule” and the Canadian author himself has subsequently modified his stance, suggesting that the rule doesn’t necessarily pertain to sports and that 10,000 hours of practice isn’t a guarantee for success, stripped down to its core, the root of the idea remains the same: there is no substitute for experience.

Beneil Dariush is learning this first hand as a fighter in the UFC lightweight division.

A decorated Jiu-Jitsu competitor before making a permanent transition to mixed martial arts, the 25-year-old Kings MMA product got the call to the Octagon last January as a short notice replacement against Charlie Brenneman when Jason High came down with appendicitis. After picking up a quick first-round submission win over “The Spaniard” to push his record to 7-0, Dariush travelled to Abu Dhabi to take on former Ultimate Fighter finalist Ramsey Nijem.

Midway through the opening frame, a left hook buckled Dariush’s knees and a second dropped him seconds later. Though he tried diligently to weather the storm and recover, the onslaught was too much and the fight was stopped. Dariush had been bounced from the land of the unbeaten.

“After the Ramsey fight, I was in a bad place,” the laid-back Yorba Linda, California resident admits. “I couldn’t figure out what went wrong and I was so frustrated. When I started getting ready for the Tony Martin fight, I was almost over-training. After the fight, I realized what I lacked was experience.”

His August meeting with Martin, which Dariush won via second-round arm-triangle choke after pushing a torrid pace over the first five minutes of the bout, was just the ninth of his career. In that time, Dariush had been to the scorecards just once and that was in his professional debut. Since then, he had seen the second round only twice – his last fight prior to arriving in the UFC and the bout with Martin.

While first-round finishes and quick nights at the office look great on paper and make for slick highlight reel footage, fighters also need time in the cage to test the things they’ve been working on in the gym and experience different situations that arise in the midst of a heated contest.

“Fighting Tony Martin, I did so many things wrong, just like the Ramsey fight,” Dariush, who followed up his win over Martin two months later with a unanimous decision victory over the previously unbeaten Carlos Diego Ferreira, continues. “If I was in the gym, I wouldn’t make those mistakes. It has to do with the experience and the pressure and I’m sure this happens with all fighters, but sometimes you do things that you would never do (in the gym) in a fight because of the noise and the crowd and just the pressure. The more experience I get, the more you’re going to be able to see my skills.”

Not only does Dariush have the confidence in his abilities that allows him to believe that with greater experience will come greater performances, but he has a tremendous role model to pattern himself after as well – UFC 185 lightweight title challenger Rafael dos Anjos.

While dos Anjos entered the UFC with more experience under his belt, the Brazilian has only developed into a consistent fighter and formidable force in the 155-pound ranks over the last three years since moving to California to train with Dariush under the watchful eye of Master Rafael Cordeiro.

After going 4-4 through his first eight UFC appearances, the 30-year-old dos Anjos has amassed eight victories in his last nine outings to land in Saturday night’s main event opposite defending champion Anthony Pettis. It’s a testament to his hard work and an outstanding example for his friend and training partner.

“Rafa is like my brother, so seeing him progress like this is amazing; it motivates me,” Dariush, who takes on Daron Cruickshank in a pivotal bout for the two emerging lightweights earlier in the evening, said. “It makes me more confident because I am training with him every day and he beats me up every day. It’s awesome. He’s a guy that is always in the gym and I think that’s something that is setting him apart from everybody else right now.

“It helps; it helps a lot,” he says when asked if sharing the same fight card with his close friend is beneficial. “When he fought Benson Henderson, I fought Tony Martin the same night and our training for that fight was great. Our wrestling was great, our striking was on-point – we worked so hard for that camp.

“I felt like I was in the best shape of my life for that fight. I could push the pace for a long time and push it hard. I think that’s what happened in my fight with him is he ran out of gas after the first round because we kept up such a high pace and I didn’t even notice. And that had to do with training with Rafa – he goes 100 percent all the time. He’s always worried about his cardio, so he’s always going so hard that it helps a lot.”

The two both emerged victorious that night in Tulsa, Oklahoma and Dariush is confident that they will repeat the feat this weekend at UFC 185 in Dallas.