Beneil Dariush: Dominance is the Goal

"I’m going to look for a finish, that’s what I always do, and my record proves it. That’s my main thing, I don’t want to just win - I want to win with dominance." - Beneil Dariush 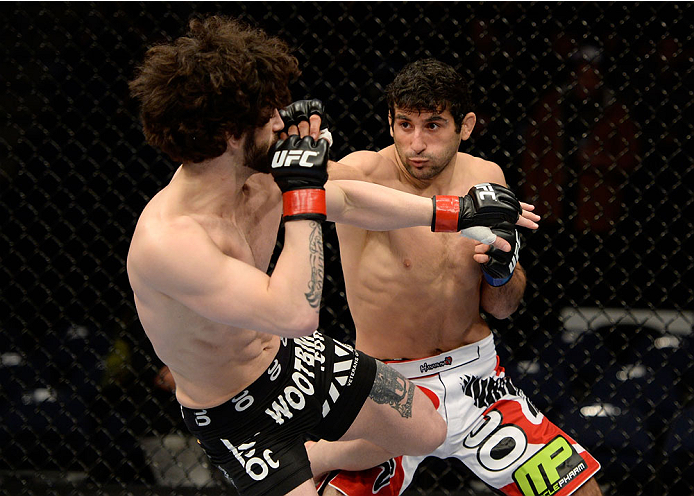 Beneil Dariush has learned a lot about himself in 2014 and now it’s time to learn why you should be a fan of his.

Born in Iran, Dariush is of Assyrian descent and spent the first nine years of his life working on his family’s farm in the small city of Gol Tappeh. When Dariush was four, his father moved to California to lay the groundwork to eventually move the whole family, which they did five years later.

In high school, Dariush played soccer, and near the end of his senior year he took the advice from an insistent friend to try out for wrestling. Quickly, Dariush fell in love with wrestling, and when he started college later that year  he sought out Brazilian Jiu-Jitsu. From there, submission grappling became Dariush’s obsession. After a very successful few years competing in international tournaments and rising through the BJJ ranks, Dariush turned his attention to mixed martial arts.

While that’s all well and good, what should truly matter to UFC fans is Dariush owning seven of his eight career wins by stoppage, and when his nose started to bleed inside the Octagon in August, Dariush got mad, got more aggressive and, five minutes later, choked out his opponent.

“I remember taking a couple punches, my nose started bleeding and I realized it’s a fight,” he said. “Forget everything else. I’d say about two and a half minutes into the round, I started feeling way better. I started moving better. And in the second round, I was able to finish.”

At UFC Fight Night: Henderson vs. Dos Anjos, Dariush secured his second submission win inside the Octagon this year, with the first being his rear naked choke of Charlie Brenneman in his UFC debut in January. Maybe he’s flown under the radar because he’s yet to be on a televised main card, but the 25-year-old is a wildly exciting rookie in the lightweight division who is preparing to make his fourth Octagon appearance in less than 10 months.

The second round arm triangle choke against Tony Martin in Oklahoma was a special one, as Dariush was coming off his first pro MMA loss, which was a TKO to Ramsey Nijem in April.

“I’d be lying if I said my confidence was as usual,” Dariush admits. “I was a little shaken because of my last loss. I really just wanted to go out there and have a good performance. I remember going out there in the first round and starting out really slow. I was so worried about everything. In between rounds, my coach told me the round was close, but he probably got the round. The cut guy was trying to fix my nose and he told me to blow my nose. I remember thinking, ‘Won’t that make it worse?’ But I blew my nose and soon as I stood up, my nose started bleeding again. Everything put together, I was so frustrated. I yelled. I think that was the first time I had ever yelled in between rounds. It’s not a normal thing for me.”

Whether it was the primal scream, the crimson streaming from his nostrils or the threat of loss number two lurking around the corner, Dariush snapped out of his funk. “I felt like myself after, I felt like I woke up,” Dariush remembers, and he pushed forward, put the pressure on Martin and used his vaunted ground skills to improve his pro record to 8-1 and 2-1 inside the Octagon.

“This year has been really amazing,” Dariush states. “I got to fight in the UFC, which is a step closer to my dream. I have been able to support my family like I have never been able to before. I’ve had success, I had my fall with Ramsey and I got to build back with the win over Tony. I have had three fights in eight months, so I have gained a lot of experience and that’s great. I want to fight another time this year, so that I could have fought five times this year.”

Up next, Dariush will travel to Rio de Janeiro to kick off UFC 179’s main card against the undefeated Diego Ferreira. With two wins, two stoppages and two bonuses under his belt inside the Octagon, Ferreira has been firing on all cylinders in 2014 with a rear naked choke win over The Ultimate Fighter 16 winner Colton Smith and a TKO of Nijem at UFC 177.

Beside Ferreria and Dariush being aggressive finishers with decorated BJJ black belts, Dariush would like nothing better than to get a win over Ferreira to provide some resolution to his loss to Nijem.

“As far as motivation goes, my motivation is always high, but there actually is more for this one,” Dariush affirms. “It’s fun to think about. It doesn’t take away my loss, but it is a step in the right direction. Diego is a counter striker standing and he has really good jiu-jitsu. I guarantee that I’m going to push forward and I’m going to make an exciting fight. I’m always going to get better. My hard work is what will make me a champion and I want people to see that through my fights.”

In preparation for his October 25th clash with Ferreira, Dariush is busy becoming more dangerous on the feet and the floor at Kings MMA in Huntington Beach, California. Sharpening his striking is gym owner and famed Muay Thai master Rafael Cordeiro. Working on Dariush’s wrestling are former Arizona State University wrestlers Jacob Harman and Markus Mollica.

Lastly, and arguably the most important, is the man who Dariush received his BJJ black belt from – four-time World Jiu-Jitsu Championship gold medalist at the black belt level, Romulo Barral. If Ferreira or fight fans want a sneak peek into Dariush’s mindset heading into the Octagon, look no further than what Dariush has learned from Barral.

“Romulo Barral, he never stops,” Dariush asserts. “I’d like to think I fight like him too - aggressive and always looking for a finish. He’s known for having a really strong guard and for finishing. I want to be known for the same things. I’m going to look for a finish, that’s what I always do, and my record proves it. That’s my main thing, I don’t want to just win - I want to win with dominance.”