Bendo's Back in the Beating People Up Biz

"I think about it as getting back to the basics and just going in
there and beating guys up. Let the chips fall where they may." - Benson Henderson 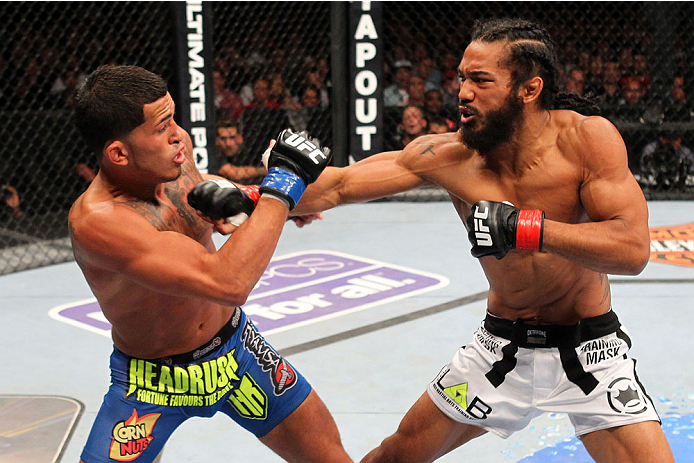 With his 30th birthday now in the books, you may wonder if former UFC lightweight champion Benson Henderson had that little talk with himself about life. You know, the one where you emerge from the whirlwind of your twenties and see if you’ve just blown the last ten years or if you’re right where you need to be.

“It was just another birthday,” he said. “I’ve had that talk with myself since I first got into MMA. I wasn’t one of those guys who put it off and didn’t think about my future and didn’t have plans to do this or do that. I’ve got long-term goals, long-term plans, and turning 30 didn’t make me re-assess or re-evaluate. Yeah, I’m 30, but I’m still on track with my goals, and it made me aware of where I’m at on those long-term goals.”

I guess with a UFC title, a WEC title, respect from fans and his peers as one of the top lightweights on the planet, and even a new bride, as he married longtime girlfriend Maria earlier this month, Henderson has things pretty much figured out at this point. But there’s still work left to be done, and the first order of business is regaining the UFC crown he lost to Anthony Pettis last August.

But to get a third fight with Pettis or whoever is holding the 155-pound belt by the time he gets back to a title shot, Henderson must beat former Strikeforce champion Josh Thomson this Saturday in the main event of FOX UFC Saturday in Chicago. For diehard fight fans, this is one of those bouts that can’t help but be good, given the resumes of both men. And the way Henderson looks at it, when he sees Thomson, he sees one of the great rivals of “The Punk” and a former opponent, Gilbert Melendez.

“Not stylistically,” he clarifies, “but in where they are in their careers. I see a true, true veteran of the game in the most respectful way to put it. He’s been everywhere, fought all around the world, he’s been on the big stage, and he’s considered one of the best fighters at ’55 for a long time. He’s been doing MMA for so long that nothing’s going to surprise him. He’s seen it all and he’s going to be ready. We match up very well, it’s going to be very exciting, we both have great cardio and are not going to get tired, so if it goes five rounds, you’re going to see five rounds of non-stop action.”

It’s a primary reason why the UFC have him headlining on FOX for the third time, and why he couldn’t refuse the offer for this fight with Thomson, even with his wedding already scheduled.

“FOX, the main event, six million people will be tuned in,” he said. “It’s hard to say no to.”

So he took it, and in an even more fortunate turn of events, Maria went along with his decision. Guess that makes her a keeper, eh?

“I knew she was a keeper before that,” laughs Henderson. “It kind of just cemented it.”

And all kidding aside, between cake tastings and other elements of wedding planning, the Arizonan was able to get in a solid training camp for this pivotal bout.

What could have been more important, as far as his career is concerned, is that unlike his first loss to Pettis in the final WEC event in 2010, he has not let the second defeat take up space in his head.

“You just take it at face value,” he said of the Pettis rematch, in which he was submitted in the first round. “You don’t delve too much into it and don’t take a deep analysis of it. ‘What was wrong was I turned my pinky the wrong way and then this happened.’ You can very easily overanalyze the reasons why you lost. You have to be honest with yourself and say ‘hey, I made a mistake here; I did this wrong, I did that wrong.’ But to overanalyze it, you can drive yourself crazy. For me, I just tried to be aware of the mistake I did make and take it at face value. I got caught in an arm lock because I did this. I made a mistake, he did a great job of capitalizing on it, he got the tap, but there wasn’t like a recurring mistake that I always make. It wasn’t something I knew was coming and it happened anyway. The fight was going according to plan, I was controlling the round, doing a good job, and I made a mistake and got caught. It is what it is. But going forward you’ve got to watch that mistake and try not to make it again.”

That’s not to say the loss doesn’t hurt, especially since it’s to the same fighter that took his WEC belt, but Henderson refuses to dwell on it. Now that’s a 30-year-old talking.

“I think I’m more of a mature adult,” he said. “You gotta grow up, and hopefully as you mature, you get wiser and better with age. The first one was heartbreaking for me, and the second one was heartbreaking for me. I came back pretty well from the first one and I’m gonna come back the same way from the second one. It’s not what happens to you, it’s how you react to it. You lose, that happens. How are you going to react to it? Are you going to sulk about it, be a baby, and make a bunch of theatrics and bitch and moan and cry? Or do you man up and move on?”

Henderson has manned up and moved on. But while he moves forward physically, when it comes to his mental, he’s going old school as 2014 dawns.

“I think about it as getting back to the basics and just going in there and beating guys up,” he said. “Let the chips fall where they may. When I was on that winning streak leading up to getting that shot against Frankie (Edgar), I wasn’t caring about things like how many more fights I needed to have until I get a title or how I match up with people. It didn’t matter to me. It was about going in there and beating the next guy up. And right now, it’s Josh Thomson, and my job is not to talk about it, but to do my talking inside the Octagon.”