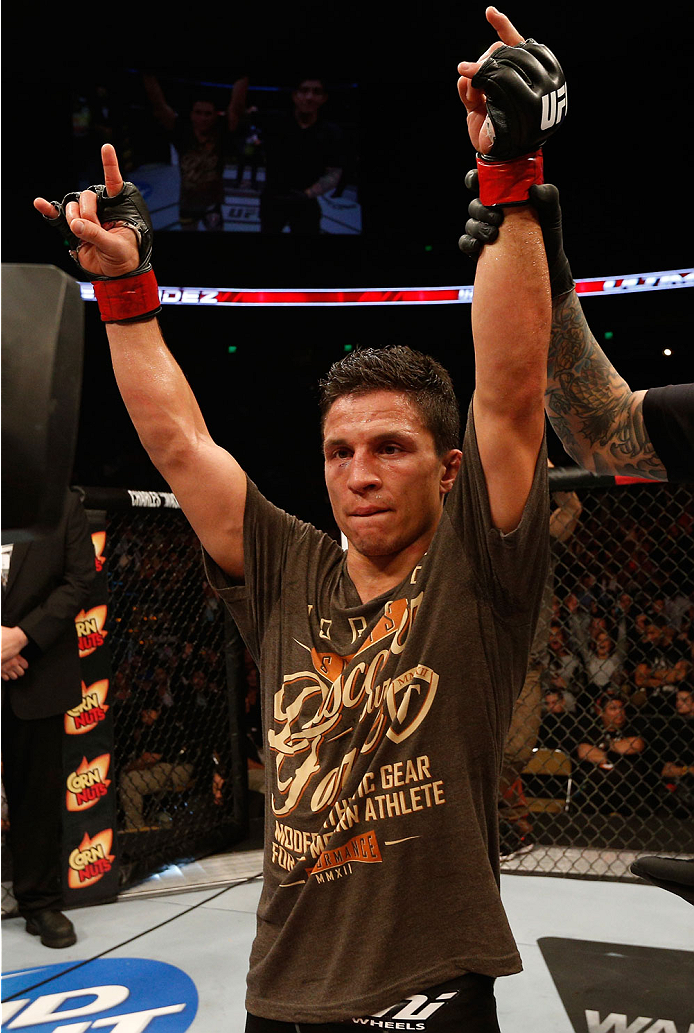 For the vast majority of fighters, the pursuit of championship gold is what drives them. Sure, there are numerous other internal motivators and secondary goals attached to their efforts, but at the end of the day, the desire to win a UFC title and be recognized as the best in their respective divisions is what gets them out of bed and into the gym each morning, afternoon and evening.

Every fight, every win is another step towards reaching that universally shared goal of competing for, and potentially claiming, that championship strap. Each performance on the road towards title contention is an audition – a chance to say, “This is why I deserve the next shot” and move one step closer to fulfilling those dreams.

Joseph Benavidez has already traversed that road a couple times, having fought for the WEC bantamweight title before facing off with Demetrious Johnson in the inaugural UFC flyweight championship fight at UFC 152. After coming out on the wrong side of a split decision loss in the initial 125-pound title bout, the Team Alpha Male member dusted himself off and collected three consecutive impressive wins, earning a second meeting with “Mighty Mouse” and another chance to cross that ultimate goal of his professional “To Do” list.

A sharp right hook brought that bout to a screeching halt just two minutes after it started and forced Benavidez to change the way he approaches his fights.

“Before, I knew a title shot, which is your main goal, what you’re fighting for, was always right there, so I was always kind of concentrating on that and getting a result,” explains the 30-year-old standout, who returns to action Saturday night against John Moraga, seeking his third victory since suffering his second loss to the reigning champion.

“Obviously the only fight I really want or that makes sense to me is the fight with Demetrious, but I’m a realist also, as far as that’s not really realistic as far as the division goes, so it’s kind of nice. I have to concentrate on other things like ‘What is it going to take for me to get there?’ and that’s getting better every day, making the most of my practices, making the most of the time in between fights and when they match me up with tough guys like (Timothy) Elliott, (Dustin) Ortiz and (John) Moraga.”

Thus far, Benavidez has done just that, making good on his goal of beating his opponents more impressively than they’ve previously been beaten inside the UFC cage.

Against Elliott at UFC 172 last April, the Las Cruces, New Mexico product used a mounted guillotine choke to pick up a first-round victory, becoming the first man to finish the durable Missouri native inside the Octagon. As an encore, he traveled to Austin, Texas and put it on Ortiz, earning a unanimous decision win over the Roufusport product with scores of 30-27 across the board.

Next up is a showdown with Moraga, a fellow former title challenger whose only career setbacks have come against Johnson and current No. 1 contender John Dodson. It’s a matchup that Moraga says he’s been seeking, which is something Benavidez both appreciates and thinks is foolhardy.

“I don’t think it’s the best idea, but you’ve got to respect that also,” he says of Moraga’s pursuit of this matchup. “Obviously, I’m going to be like, ‘The guy wants to fight me? That’s the wrong decision’ – that’s the only way to look at it – but at the same time, I respect a guy that is like, ‘I’ve been fighting this guy and this guy, now I want to fight a guy with more notoriety that I think is more dangerous.’ You’ve got to respect a fighter like that.

Three fights is all it took for Benavidez to work his way into a rematch with Johnson following their first encounter, and with the reigning flyweight champion having just turned back the challenge of Kyoji Horiguchi to earn his sixth consecutive successful title defense, a win over Moraga at UFC 187 would likely put him on the short list of potential candidates to fight for the title whenever Johnson is ready to return.

But the laid back contender that walks out to Ted Nugent’s “Stranglehold” and loves talking movies on social media isn’t thinking about any of that.

His focus remains on consistently getting better and delivering the best performance possible each time he steps into the Octagon so that if and when that leads to another chance to battle the champion, he’ll be ready to make the most of it.

“I’ll just wait to get the call and control the part that’s going to help me when that opportunity does present itself.”