"I’m going to be much more comfortable in this fight because I know how
everything works now. I know what I have to do and I’m
going to do it next weekend." - Ben Wall 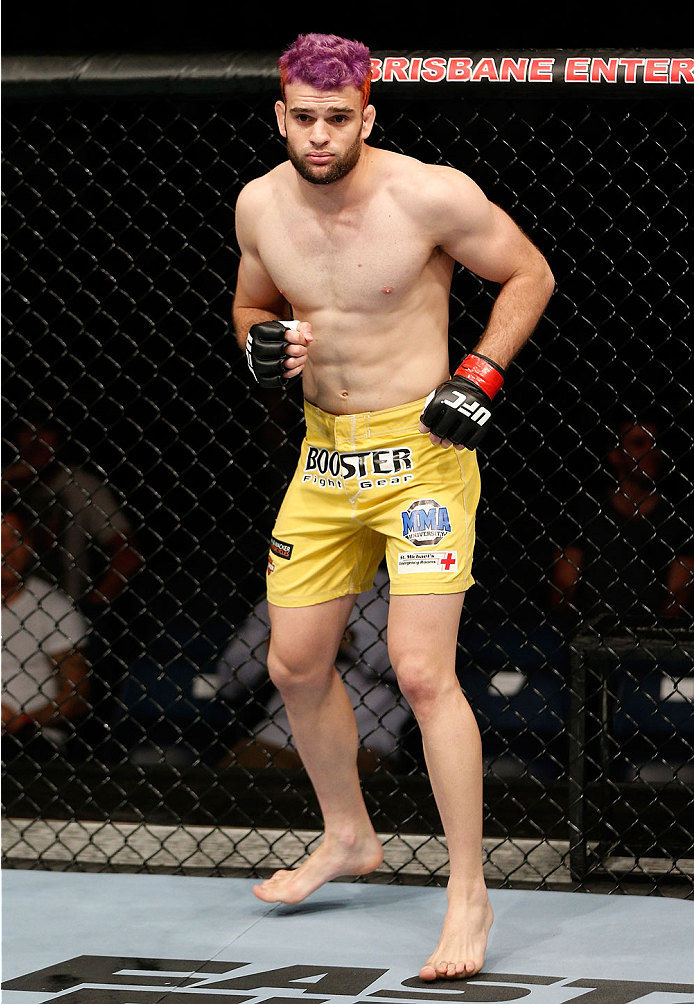 Breaking through to the biggest stage in mixed martial arts is a unique battle in its own right. Success may have been found in great frequency in the comfortable surroundings of a fighter’s home region, but when a fighter steps under the bright lights of the Octagon, it’s an entirely different ball game as everything is amplified tenfold.

Everything about the experience is bigger and that creates a unique amount of pressure that is impossible to duplicate in pre-fight preparation. Where a fighter has competed in front of lively crowds on their road to the UFC, when they finally make that walk to the Octagon, the arena is buzzing with an energy that can be felt on the skin.

Those circumstances can be difficult to shake, and Australian prospect Ben Wall admits the fabled “Octagon Jitters” may have played a slight part in his promotional debut back in December of 2013. The 24-year-old squared off with heavy-hitter Alex Garcia in his first showing under the UFC banner and was looking to make the most of the opportunity he had been dreaming of for years. Despite the fact that he had been working to fight as a featherweight, Wall took the call to step up on short notice and step in against Garcia two divisions above his fighting weight.

Nevertheless, the action inside the cage is unpredictable and even fighters who are well-prepared are susceptible to getting caught with an unsuspected shot, and Wall suffered the first loss of his professional career in front of his countrymen.

“I was feeling pretty confident going into that fight even though I was supposed to be fighting at featherweight,” Wall said. “But I got called up on 10 days notice and we fought at welterweight. I was still pretty confident I could beat him - and still believe I could beat him - but I got caught. That’s how it goes sometimes. I’m not sure if I was nervous, but maybe a little bit. It was my first fight in the UFC, but I was still confident going in that I was going to win that fight.”

While a loss on the first step out of the proverbial gates could serve to rattle the confidence of most, Wall has turned the negative experience into a positive and has all his energy focused on the next challenge in front of him. The Team Alliance Member will face Justin Salas when the UFC touches down in Cincinnati for Fight Night: Brown vs. Silva and he’s looking to the make the most of his second opportunity to prove his worth inside the cage.

Where confidence was there on his initial run, his second outing will eliminate the shock value of jumping into the live-wire environment of a UFC event, and he believes he’ll be much better suited to perform on fight night. Wall is looking at Salas as his chance to carve out his foothold on the featherweight roster and he has every intention of solidifying that notion on May 10.

“I’m going to be much more comfortable in this fight because I know how everything works now,” Wall said. “I know what I have to do and I’m going to do it next weekend. It’s a very important fight for me. Since I lost the last one I really need to win this fight. I believe it is a good matchup for me and I’m pretty confident going in. I know wrestling is his strong point, but I’m not all too worried about it. I think I’ll beat him everywhere the fight goes. It is going to be a good fight and I plan on putting on a show for the fans.”

While Wall may be fighting for his placement on the UFC roster, he’s also representing a bigger movement than just his personal career. The love for MMA in his home country has exploded over the past six years and the fan base has grown to become one of the most passionate collectives around the globe. The Australian fans have embraced the fight game as a whole, but they have also shown immense support for the fighters who emerge from the land “Down Under.”

The talented young Aussie is certainly aware of the support his countrymen provide and he wants to make Australia’s fighting faithful proud. There have been some rocky waters for Oz-based fighters as of late and Wall will be looking to turn things around in a big way against Salas in Cincinnati.

“I want to be a great representative for Australia and I believe this fight is very important for that,” Wall said. “The sport is getting a lot bigger there but there is still a long way to go. There aren’t a lot of Australian fighters currently in the UFC. I believe I’m the only Australian fighter in my weight class. We haven’t been doing very well as of late, but I plan on getting a big win for us in this next fight. It’s very important for me to get a win here…not for me personally, but for my country as well.”