Ben Saunders: The Resurgence of Killa B Continues 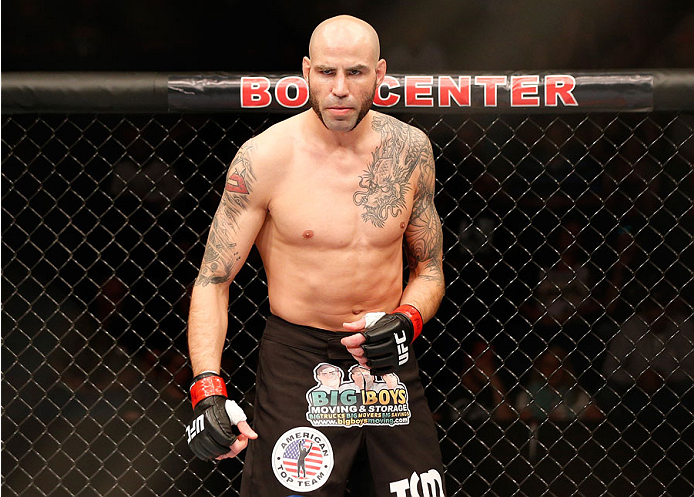 It would have taken some never before seen force of nature or phenomenon to erase the smile from Ben Saunders’ face on August 23.

It had been just north of four years since the American Top Team staple had competed inside the Octagon and an eventual return to the sport’s biggest stage had been hovering around his mind throughout the entire stretch. Granted, Saunders kept plenty busy during his time away from the UFC as he locked up with talented opposition on a frequent basis, but getting back to the place where his career kicked into high gear and basically took flight seven years prior was the ultimate goal.

As it turned out, “Killa B” would get that opportunity when the UFC rolled through Tulsa, Oklahoma for Fight Night: Henderson vs. dos Anjos, and it was one he was determined to make count. Four years of envisioning this moment and eagerly anticipating redemption left a pounding inside his chest so loud he could barely hear the crowd as he stepped into the Octagon, and unfortunately for Chris Heatherly, all that energy came out at his expense.

Not only did Saunders unleash his signature aggression from the opening bell, but he put a fitting cap on the action by locking up a fight-ending omoplata, which any MMA fan knows is one of the rarest submissions to be found on the modern landscape of the sport. Nevertheless, it was a fitting conclusion for Saunders’ homecoming, and while a little more than three months have passed since that night in Tulsa, the ear-to-ear smile that was visible post-fight in on August 23 is still present and accounted for.

“Coming back to the UFC and getting that victory was probably every emotion I could possibly feel hitting me all at once,” Saunders said. “In addition to being extremely excited, I didn’t know whether to laugh, cry or do something crazy. I was just in awe over the situation. I had played it all out in my head when I visualized the fight, and it all went down exactly how I had envisioned it going, so it truly put me at a loss for words. It was like a dream and absolutely incredible.”

In the mix of all the emotions that engulfed Saunders in the aftermath of his victory over Heatherly, one of the most prominent feelings was that of validation. When his initial stint with the UFC came to an end, it did so at a time when Saunders was desperately trying to establish himself in the talent-stacked ranks of the welterweight division. While his fan-friendly style had never failed to put on a show for the passionate fan base, winning is ultimately what allows a fighter to keep his roster spot, and Saunders got aggressive in his attempts at solidifying himself in the divisional picture.

He took fights against top-ranked contenders on short notice in hopes of sparking that fire, but those rushed decisions ultimately proved unwise. After a rough skid where he lost three out of four showings, he was released from the UFC and forced to ply his trade on other stages around the sport. And while the initial setback hurt his pride a bit, it also became the catalyst for a tremendous growth period he was about to experience as both a fighter and a human being.

Getting the win over Heatherly in Tulsa was undoubtedly a triumphant return, but it also showcased a much more versatile version of the hard-charging welterweight knockout artist.

“There was a sense of validation for sure, but it had been almost four years since I last stepped foot inside the Octagon, and over that time I have stepped my game up dramatically,” Saunders said. “Getting cut and going to Bellator was a blessing in disguise because I fought a lot of tough guys and did so on a ridiculously consistent basis. It allowed me to gain experience and really put focus on parts of my game that needed to be refined. My wrestling, takedown defense and jiu-jitsu off my back all became sharper.

“A lot of people sulk and maybe give up when they get cut from the UFC, but it was a wake-up call for me. I told myself I needed to step my game up tenfold and take things to the next level. But at the same time, I wanted to maintain my style. No matter where the fight is taking place, I believe and maintain I have the ability and the skills to end the fight. Getting more experience only showed me more ways to do that. Above all else, my fight to get back to the UFC was a testament to my mental fortitude and my refusal to give up or give in.”

And while Saunders is enjoying a resurgence in his return to the UFC, the next man he steps into the Octagon with at UFC on FOX: Dos Santos vs. Miocic shares a familiar story. Where Joe Riggs was once a prominent gunslinger on the UFC stage during the post-TUF boom of the mid-2000’s, “Diesel” would also eventually hit a rough patch and lose his place on the UFC roster. This would send the notoriously scrappy veteran all around the globe competing for different organizations as he battled to keep his career alive.

Yet where it seemed Riggs’ career was fading, perhaps for good in 2011, the MMA Lab representative would find that proverbial spark and launch an impressive comeback. The heavy-handed slugger would put together a six-fight winning streak that earned him a call back to the UFC, and when he makes the walk to the Octagon to mix it up with Saunders, it will be the first time he’s done so in eight years.

Nevertheless, both Saunders and Riggs are proven veterans of the hurt business and the Coconut Creek-based fighter believes the fans in Phoenix are going to get their monies worth when the leather starts flying.

“I was extremely honored to get this fight because I’ve been a fan of Riggs for a long time,” Saunders said. “He’s got almost 60 fights and he’s been doing this before it was called MMA and it was known as ‘No Holds Barred’. I mean he has NHB tattooed on him and there’s no doubt he’s for real. Riggs is extremely well-rounded and he’s as tough as they come. I’m expecting an absolute war and I believe we are going to give the fans a beautiful fight. I can’t wait, man, and I’m smiling just thinking about it.”