Find out how "Big Ben" Rothwell changed his life to change his fights. 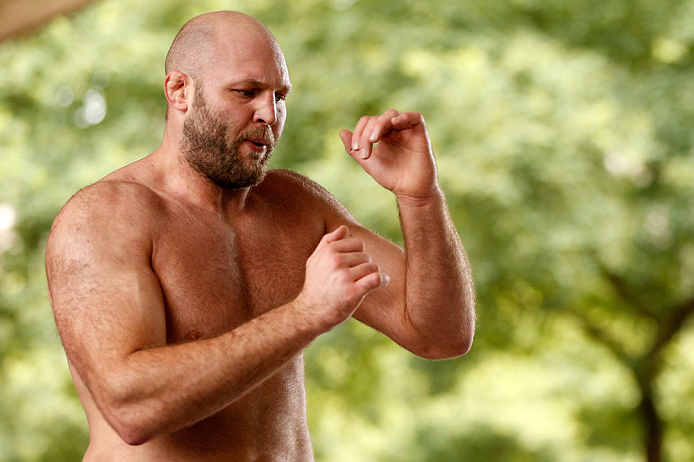 Wisconsin heavyweight Ben Rothwell (32-9) gets a backyard brawl this weekend at UFC 164 in Milwaukee. Coming off a loss, Rothwell hopes the dietary and training changes he’s implemented will carry over into a victory against veteran Brandon Vera (12-6, 1 NC). Read the three basic -- but big -- changes that he's made to ready himself for battle.

Eating Improvements
“Dieting has been a constant battle for me,” Rothwell told UFC.com. “But for the past two years, eating better has become a lifestyle, and I’ve been working hard to get my body at its optimum level.”

That's included weeding out foods with artificial colors and sweeteners, and not just doubling down when there's a fight on the horizon. 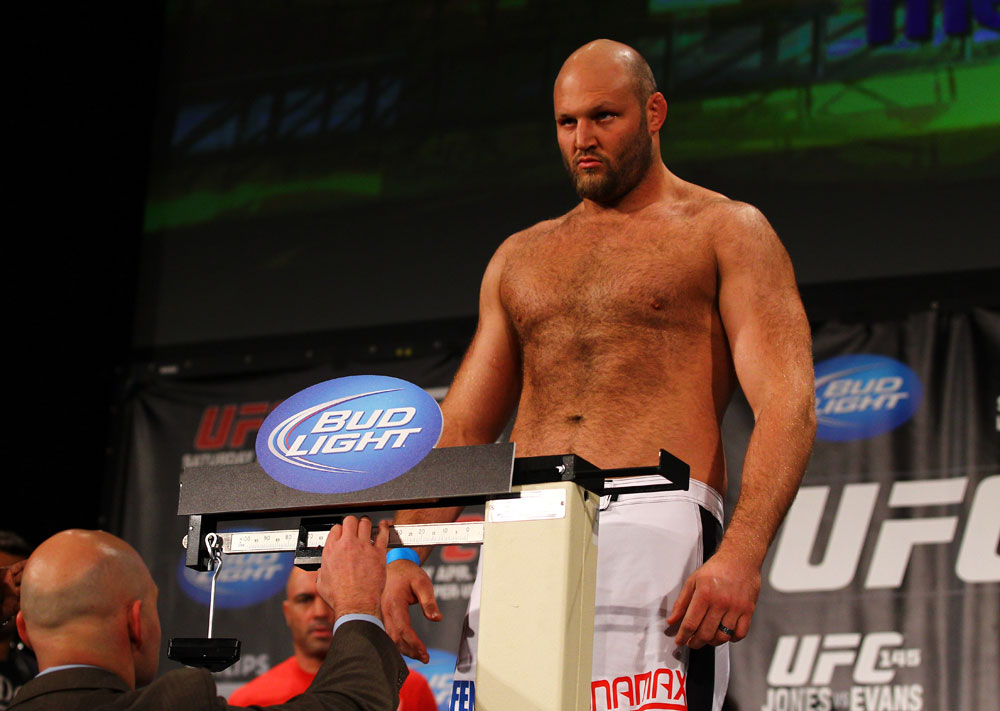 “I was a guy who ate whatever he wanted, and then when I was a couple months off from a fight, I’d eat better,” he admitted. “My new diet has helped with my training, and my energy and drive in the gym has also increased. For me, it goes beyond my career as a fighter.”

One reason Rothwell’s body has responded so favorably to a cleaner diet, says Andy Hennebelle, NASM-CPT, CSCS, USAW, a TRX Ripped trainer at the UFC Gym in Corona, Calif., is because natural foods aren’t as taxing for his body to absorb.

“Preservatives and processed foods don’t digest as well as whole foods,” Hennebelle says. “When we can provide our body with natural substances that it can recognize, our body has a better chance of utilizing those food sources properly.” 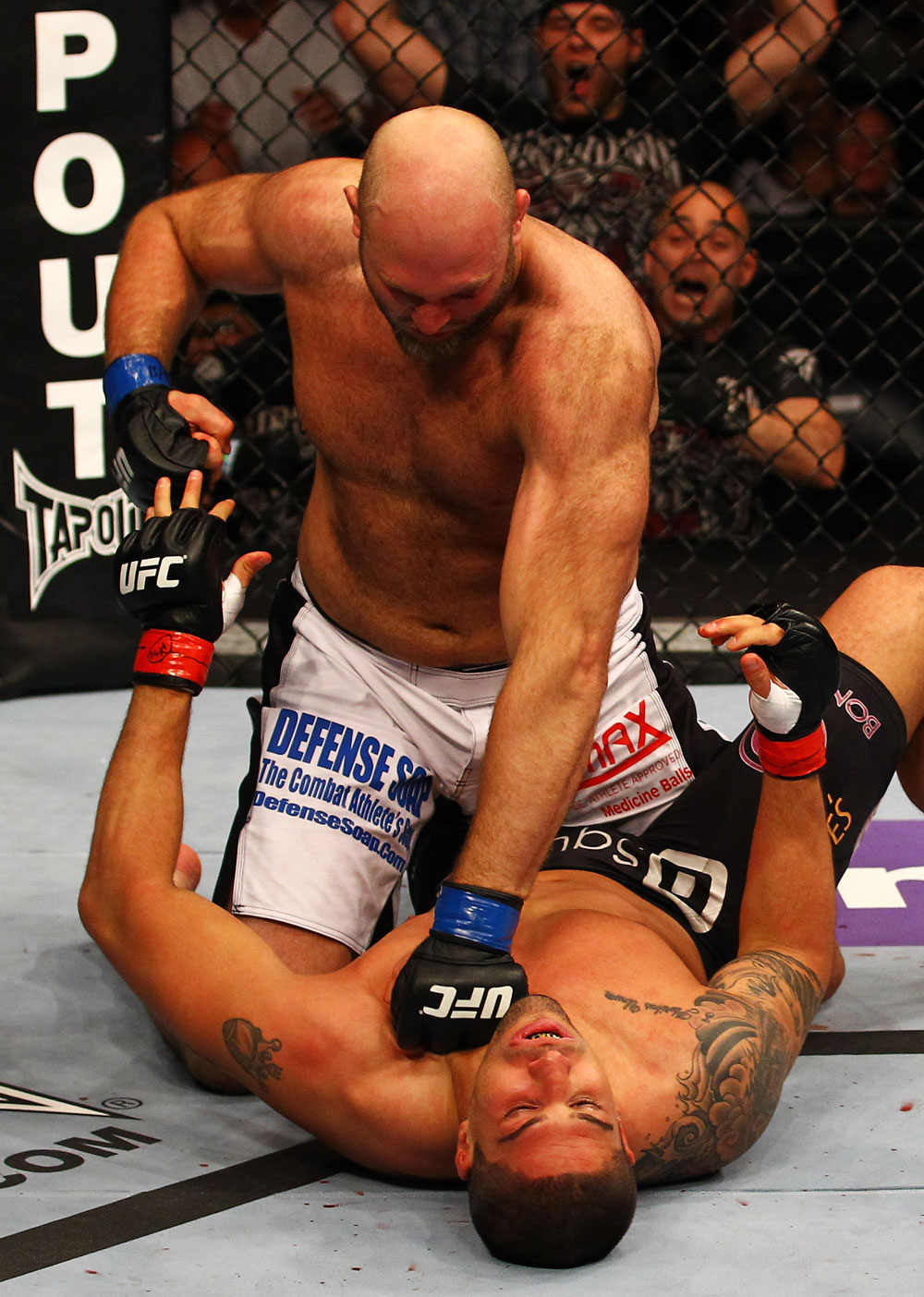 Another change Rothwell and his team implemented has been a cardio circuit with seven stations — a Concept 2 rower, Jacob’s Ladder, track run, VersaClimber, Real Runner, Airdyne bike, and recumbent bike — that he does twice a week.

“There’s a set distance you have to meet, and you get a one-minute rest in between each station,” he added. “It never gets easier because each station is a sprint.”

“With other types of conditioning, I don’t see if it’s improving my MMA as much as it should. And some of my past conditioning has even hindered it,” he said. “But pushing my cardio has pushed my training. I spar with big and small guys, and in the later rounds, those smaller guys are the ones who push you. But when I’m pushing them, or guys are taking rounds off and I’m doing every one, I can see my conditioning is getting fixed.”

Writing it Down
With someone recording his times, Rothwell says the tangible
evidence regarding his improvements has been as rewarding as it’s been
motivating. 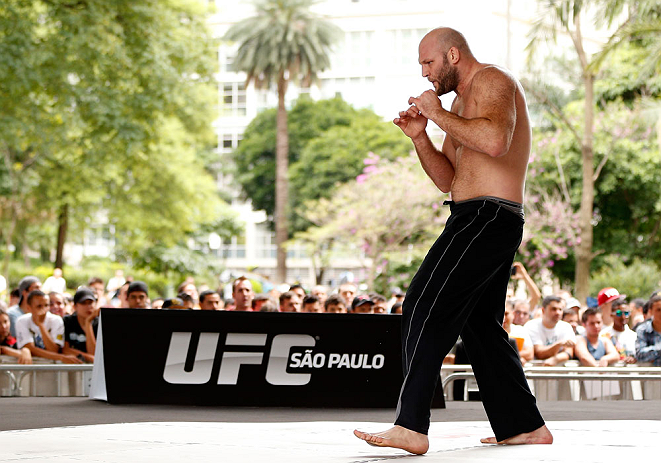 Adds Hennebelle: “When you write down your skills, you’re able to go back to previous fight strategies to see which worked best. Coaches are always trying different things to get the best from their athletes, and if numbers get worse, they can show what you were doing differently in the past that made them excel. If the numbers are improving, they can show what you’ve been doing that’s caused the improvement.”

As Rothwell closes in on his showdown with Vera, he’s also tweaked his training.

“I’m naturally strong, but my goal is to be strong all the way through the fight,” he said. “The circuit training I’ve been doing is a whole-body workout that’s all about endurance.” 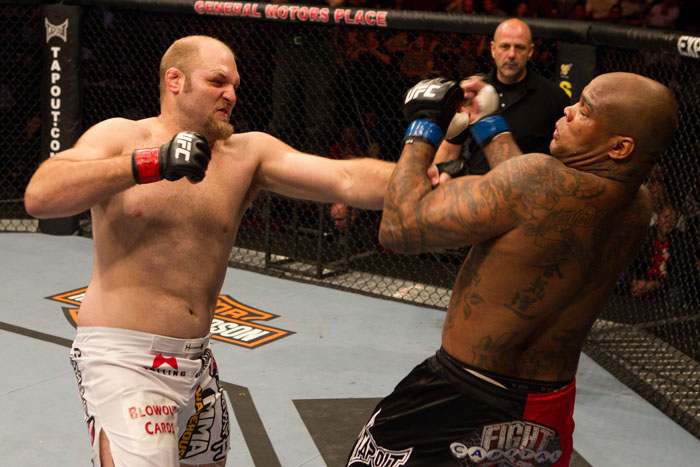 He adds, “You do 10 reps of each exercise and do the circuit three times through. When you’re done at one station, you take however long you need to rest before moving to the next station. But it’s about the overall time it takes you to finish all three circuits. Attack each station and it might take you anywhere from 25-30 minutes to complete.”

Try for Yourself
Here’s an example of Rothwell’s training circuits:

Circuit #1 (sets of 10, three times through)
* Pull-ups
* Box jumps
* Dips
* Curl and press (a movement that mimics an underhook and shrugging someone off of you) 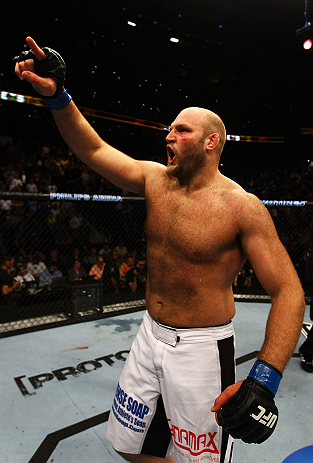 Circuit #3 (sets of 10, three times through)
* Inverted Rows (back to the floor, heels on a Swiss ball, grab a 45-pound bar, pull yourself up)
* Kettlebell swings
* Single-leg box squats (knee thrust when you squat)
* Feet elevated on a Swiss ball, push-up, and put your chest to the floor on the descent