Ben Rothwell: All Things in Due Time 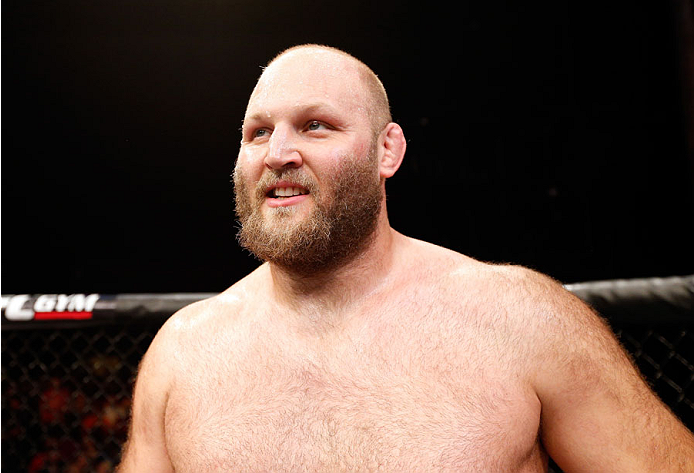 At 33 years old, Ben Rothwell may be in his physical prime as a prizefighter. Yet even with his co-main event bout in New Orleans against Matt Mitrione just days away, that doesn’t mean the heavyweight contender from Kenosha, Wisconsin is looking to fight three or four times a year just to strike while the iron is hot. In fact, he still thinks the heat is still pretty high following his knockout win over Alistair Overeem in his most recent match last September.

“I feel like the iron is still hot,” he said. “I don’t think nine months is enough time to cool it off. Maybe a year and a half would be a little too long, but I think I’m still relevant and people remember. It was just September, and I was a 5 to 1 underdog and I knocked out everybody’s hero in Overeem. It was a huge fight for me because it showed everybody that I’m a top ten guy and that I belong where I’m at. We’ll just have to see how things go. I don’t want to put that much time between fights either, so I’ve got to find that good, happy medium. I think six to nine months is good for me.”

It’s probably not the answer you would expect from a fighter ranked ninth in the wide open heavyweight division, but Rothwell isn’t a conventional fighter, and even though he’s won three of his last four, with knockouts of Overeem, Brandon Vera and Brendan Schaub, he’s going to do things the way he wants to.

“I think through my maturity I’ve learned that everything happens when it’s supposed to happen,” he said. “I wasn’t ready to be a champion when I was younger. I wasn’t ready to handle things the way they needed to be handled the right way.”

“In 2002, I had ten fights in one year. In 2006 and into 2007, I fought nine times,” Rothwell continues. “I’ve been known to be very active, and now in the later part of my career, I think the reason that I have less fights is that I’m 33 years old. And it’s not my body, but my mind. I paid my dues and I’ve gotten really, really good at keeping that gap between my fights, and it’s given me some time to ingest everything that I’ve taken on and my position where I’m at right now. So I think over the last six years I’ve matured and learned about myself and how to be a better martial artist. I’m not Donald Cerrone, that’s for sure. He reminds me of the 22-year-old Ben, and I’m just not up for that anymore.”

A big part of Rothwell’s maturity comes in the form of the gym he opened in Kenosha, Rothwell MMA.

“My gym is doing really well right now,” he said. “I’ve had it for three and a half years, and it’s real exciting. I’m a full-time coach, and I’ve now compiled a record of 3-1 while being in my own gym, with three finishes and two Knockout of the Night bonuses.”

“During all my down time, the younger Ben, I’d get a big win and like other guys, I’d take my three months off doing nothing and staying out of the gym,” he said. “It’s not possible when you own a gym with your name on it. People expect to see you, and during my down time, the Monday after my fight, I’m in there teaching my class. And it keeps me in the gym. I have a commitment to everyone and, honestly, I’ve watched myself blossom into the martial artist that I am now, and it’s because of the teaching. I teach five days a week and it’s changed me completely. I can’t put a price tag on what I’ve gained in the last three years teaching.

“I’ve got a group here and we’re like family,” he said. “I’ve got people that I trust, that are in my corner and that I know want me to win. So it’s truly an awesome thing that I put together and I’m very fortunate to have it. But what’s really awesome are the kids and the adults. They’re not professional fighters and may never be, but they come to our gym, and there are countless stories of how it’s changed their lives. They lost all this weight, they have friends that they’ve never had before, they’d rather be at the gym than at their house – now those stories are the motivating ones.”

You could say that Ben Rothwell has not just matured, but that everything in his personal and professional lives is coming together at precisely the right time. That’s a great spot to be in, and while he wouldn’t disagree, he’s also quick to give credit to everyone but the man in the mirror.

“I have to be extremely selfish in the cage, but the second I step out of it, it has to be the exact opposite,” he said. “I have to remember everyone that helped me get to where I’m at and everyone that’s helped put their time and energy into me. This entire thing is because of everybody else.”