Ben Henderson - The Will to Inspire

"When you see somebody dig deep into their heart and soul and open up their heart and they let the world share with them for just that one game or one fight, that’s something special." - Ben Henderson 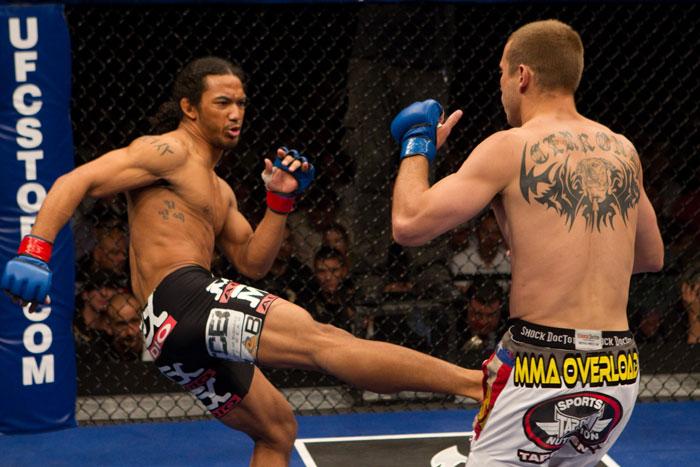 Every athlete wants to make it onto ESPN’s SportsCenter. No one wants to do it the way Ben Henderson did last December.

As the recipient of the kick heard ‘round the world, an off the cage job by Anthony “Showtime” Pettis in their WEC lightweight championship bout, Henderson was stuck reliving an eternal loop of his worst moment as a professional fighter on the most visible outlet in sports. Today, months later, people are still talking about it.

“It happens to the best of us,” said Henderson. “It happened to (UFC welterweight champion Georges) St-Pierre against Matt Serra, it happened to (UFC middleweight champion) Anderson Silva against Ryo Chonan with a flying scissor heel hook that was a pretty highlight reel type of thing. It’s happened to all the best fighters – Rich Franklin and Chuck Liddell have been on the bad end of a bunch of highlights, and thankfully they’ve been on the giving end for most of them. I guess it was just my time and there were definitely some lessons learned from that fight, and whether you win, lose, or draw, you want to take lessons from a fight and grow from that experience. I think I’ve done a pretty decent job of that, and learning from my mistakes and learning from that fight. You’ve got to take it in stride.”

It helps that Henderson is a gentleman, so he answers each query about “the kick” with a class that’s admirable. It also helps that he has a strong team and support system that rallied around him in the days following the bout, which he lost by a razor-thin five round decision. But what may have really gotten him to let go of the Pettis fight is that contrary to what you might think from viewing just the ever-repeating highlight of the bout is that the fight was even going into the fifth and final round and that he didn’t get knocked out by the kick.

“That’s one thing I think a lot of people forget in the excitement of the kick,” he said. “As a fan, I’m far enough away now that I can admit that kick was amazing. If I would have been watching it, I would have been like ‘Oh my God, that was awesome.’ Sadly, I was the one being kicked in the head. But a lot of people don’t realize that in the first round I went with the gameplan, took him down and beat him up a little bit. Second round through the fifth round, I kinda went away from the gameplan and I let a little bit of the hoopla of fighting for a UFC championship after beating Pettis get to my head a little bit. I wanted to show (UFC lightweight champ) Frankie Edgar and (number one contender) Gray Maynard that I could stay standing for five rounds and still win and that I was evolving as a fighter and I could strike and stand. So I did that for four rounds against Pettis, and it was a close fight. It was even on every judge’s scorecard going into that fifth round, and the fifth round was pretty darn close until the kick. So I think a lot of people downplay that, which is fine by me. If no one’s gonna remember that, and all my opponents forget that I am evolving as a standup fighter and I am getting better as an overall MMA fighter and think I’m just a ground guy who can’t stand up, that’s fine by me.”

The loss to Pettis, which cost Henderson his WEC lightweight crown, was his first since 2007, and his only one since making it to the big stage in the WEC in 2009. Before the bout, “Smooth” was 5-0, and his victims’ list included the top guns of the organization – Donald Cerrone (twice), Jamie Varner, Anthony Njokuani, and Shane Roller. He finished four of those five fights, and the one he didn’t was a decision win over Cerrone in what was one of the best fights in the history of the organization.

It was an amazing run, and if you toss in his engaging personality and exciting style, Henderson’s rise could be seen as mirroring that of current UFC light heavyweight champion Jon Jones. But there have been no Jay Leno appearances for Henderson, who doesn’t let such things bother him.

“I’m pretty good at not playing the ‘What If’ game,” he said. “This is the here and now, it isn’t a parallel universe or an alternate reality. It happened, it played out the way it did, and I can accept that and live with that. Let’s move on from there. I will make my own future by going in there and getting my hand raised.”

Henderson’s next opportunity to do just that comes this Saturday night, when he takes on Mark Bocek at UFC 129 in Toronto. It’s an intriguing matchup on many levels, and Arizona’s Henderson believes it has the potential to match or exceed the excitement produced by his instant classics against Cerrone and Pettis, both of which earned significant support for Fight of the Year honors in 2009 and 2010, respectively.

“I think it’s gonna make for a super exciting fight,” he said. “You’re gonna see a lot of jiu-jitsu wizardry that the hardcore fans and the jiu-jitsu purists will love. And the casual fans, they’re gonna be like ‘oh man, that was awesome. I don’t know what it was, but it looked really cool.’ I can put on a good show and entertaining fights, and I hope to get that started early for 2011. I want another Fight of the Year candidate. I want to go out there and open up my heart and let the fans see that, and I think Bocek and his style will be a good chance for me to do that.”

When Henderson talks about the fight, you can hear the change in the tone of his voice, his cadence speeds up, and it’s clear that the idea of grabbing his hard hat and wading into battle doesn’t intimidate him. Instead, it inspires him. In 2009, before his first bout with Cerrone, Henderson met with the media assembled in Dallas for UFC 103, and spoke of what he truly desired in the sport of mixed martial arts.

“I want a Rocky Balboa fight where I get the crap beat out of me for four rounds, and I come back to win in the fifth round,” he said. “I want a highlight reel, knockdown, drag ‘em out 25 minute war. That’s what I want. The true champions, the guys who really want it, they show their heart, they show their mettle, they show what they have inside their soul. I want that every time I defend the belt. I want every challenger to push me so hard that I come out barely squeaking at the end. It’s good to be Anderson Silva and knock everybody out in 30 seconds, and not get hit and all that, but that’s too pretty. I want the wars.”

He’s engaged in a couple so far, and fights like the ones he’s had with Cerrone and Pettis are ones that will be remembered long after he hangs up the gloves. And that’s what he wants. The 27 year old Henderson wants young up and comers to talk about him the way he talks about guys like BJ Penn, Matt Hughes, Carlos Newton, and Don Frye, pioneers who set the stage for him and his peers. And to get there, it’s about more than winning. It’s about how you win, and that transcends all barriers and all sports.

“It connects with people and it touches people,” said Henderson. “It’s not just fighting, but any sport you watch. It’s like Michael Jordan when he played with the flu in the 1997 (NBA) playoffs. You could see it in his eyes and in his body, he could barely stand up and he had to be carried off the court. When you see somebody dig deep into their heart and soul and open up their heart and they let the world share with them for just that one game or one fight, that’s something special and that’s what inspires people. It speaks to them on a personal level and those performances make me want to be a better human being. I love it, I cherish it, and I absolutely revel in it. I love to open up my heart and soul and let a little bit of God’s light shine out. I want to inspire people and it means a lot to me.”