For Ben Henderson, it's Win or Wait

"For me there are stakes every time I fight,” Henderson said. “There’s no special sense to win because it’s so high up. Whether you’re No. 1 or No. 20, the idea is you have to get your hand raised." - Ben Henderson 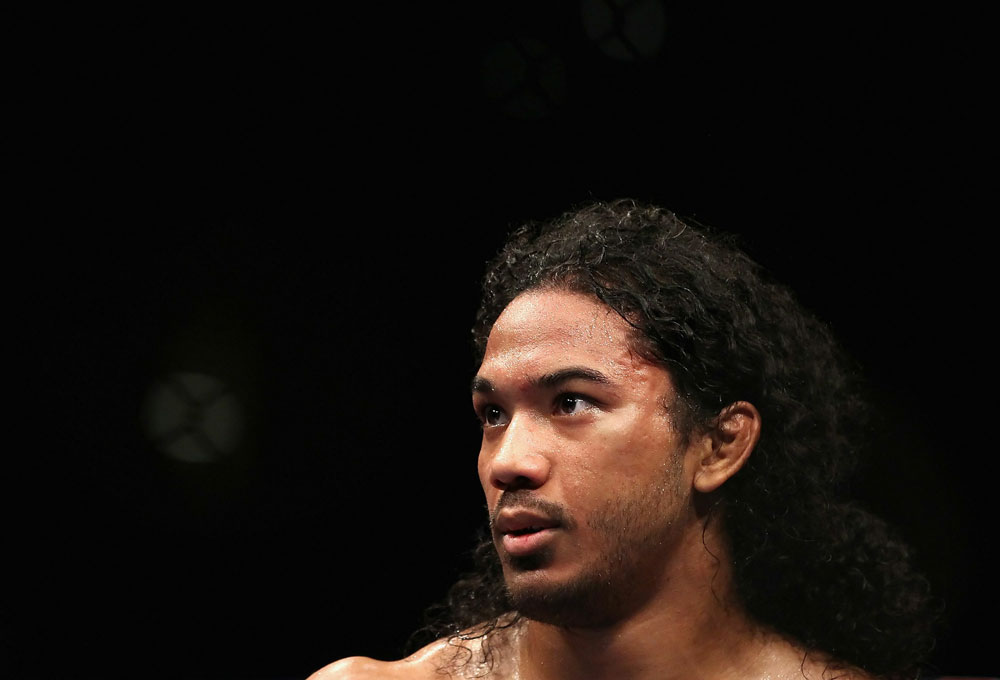 Ben Henderson has been down the road to a title shot before. It feels like yesterday, yet it was 32 months ago, when a lanky 5-foot-9, 25-year-old from Glendale, Ariz., with long, flowing hair that when put in a bun is called “Benson Bunnies” by his MMA Lab teammates, debuted in the WEC with a 42-second guillotine choke submission of Anthony Njokuani.

Two fights later, “Smooth” became the WEC interim lightweight champion after a classic five-round tangle with Donald Cerrone, and once he smothered Jamie Varner like a tarantula he was undisputed champion. He defended the title by choking Cerrone in 1:57 of their rematch before dropping it in WEC’s December 2010 swan song when Anthony Pettis unveiled a maneuver from the book of Morpheus.

In the second fight of his UFC career, Sunday night in Milwaukee, Henderson faces maybe not his greatest challenge in Jim Miller, but certainly his most seasoned opponent. And once again the stakes are in the stratosphere. The winner is a good bet to be proclaimed No. 1 contender at 155 pounds. The loser won’t receive a pink slip, but navigating a new road to gold working in MMA’s deepest division will be like driving cross country in a Volvo.

If you ask Henderson, his approach is always the same, smooth as silk with precise execution. Every fight, especially on Zuffa’s crowded roster, is win or go home. Do or die. Kill or be killed. And that’s why he’s driven, whether he’s a top UFC contender or living the rough life on the independent circuit.

To achieve victory at UFC on Versus 5, Henderson (13-2 MMA, 1-0 UFC) must figure out how to solve the complex puzzle that’s Miller, 20-2 overall (9-1 UFC) and a winner of seven straight fights and 10 of his last 11. While Henderson’s roster of conquests is impressive (Cerrone twice, Varner, Shane Roller, Njokuani and most recently Mark Bocek), Miller’s amazing run has caught Dana White’s attention.

A victory and Miller will likely fight the winner of Frankie Edgar’s title defense against Gray Maynard October 8 at UFC 136, but if Henderson wins here’s the puzzle: Pettis defeated Henderson. Clay Guida defeated Pettis and believes he’s No. 1 contender. Yet Henderson will have defeated Miller, who last tasted defeat on March 7, 2009 to Maynard, two months after Henderson’s WEC debut. The winner of Edgar-Maynard III will need a new No.1 contender and out of all of the above, it’s Henderson who owns the championship pedigree. Many will attempt to figure out if, how or when White and Joe Silva will proclaim Henderson the chosen one.

If you think solving Miller will be an ordeal, Henderson’s attempt to channel his inner matchmaker is worse than deciphering Sudoku’s “Evil” level.

“Man, I have no idea – I’m not too good at guessing what will happen,” Henderson said. “It’s a what-if game. I’m not a fan of playing the what-if game. What’s in front of me is Jim Miller. After that, who knows? Maybe Gray Maynard decides to take a back seat and retires. Maybe Frankie Edgar decides to take up modeling. Who’s knows what’s going to happen?”

On the surface, a lot happened during Henderson’s sizzling war with Pettis. The reason why Henderson suffered just his second MMA loss had more to do with what didn’t happen besides Pettis turning into Neo of The Matrix. On a night when the WEC lightweight title was retired and the winner was to earn his shot at the UFC belt, Henderson beat himself up for being too elusive and evasive, and that deviation from his normal approach didn’t work.

In short, Henderson failed to stick with the game plan. And that failed him on one of the most important nights of his career. Henderson was the champion, but he and Pettis were fighting for the futures of all WEC lightweights. The UFC was deep enough and there were not only questions about how the winner would fare against the sport’s elite, but how each handled the hype. Every day fans and media peppered them with questions of what will you show? What will you do different? And can you hang with Maynard? With Edgar?

Pettis made his career with the “Showtime Kick,” shining in the moment. Henderson, someone who’s greatest strength is grace under pressure, admitted to the hype getting the best of him.

“I definitely think so,” Henderson said. “Hearing so much from all the reporters, the fans, and everything, all that being centered around the winner of this will fight for the UFC title.”

Rather than overhaul his training staff or move to another city to settle with a new camp, Henderson returned to the MMA Lab to work on weaknesses that became more glaring with defeat. Facing Bocek, a rugged veteran, Henderson mixed in aggressiveness with patience, which he’ll need in abundance on Sunday. In his last two fights, Miller submitted a flashy and talented, yet inexperienced, Charles Oliveria, and broke down a tank in Kamal Shalrous. His goal is to ground and frustrate an opponent. Henderson’s trademark is to pull off a surprise or two, like the time he wrapped his legs around Varner’s body and arms around his neck and head. As deadly as Miller has proven, Henderson is creative enough to pounce on just one slip on a banana peel.

“You can expect the same continued aggression and the same focus, that’s for sure,” Henderson said. “As far as expecting something flashy or a tarantula-like submission or anything like that, if Jim Miller presents something to me … if he gives me his neck I will take his neck. If he’s blinded by a camera flash in the crowd and gives me his arm, I’ll take his arm home with me.”

Back home, away from the cage, Henderson’s faith reminds him daily there’s more to life than winning, losing and the UFC. A Hall of Fame fighter named Randy Couture learned through attrition how to deal with, what Sam Sheridan wrote in A Fighter’s Mind, “The systemic pressure that elite athletes face, the overwhelming pressure to succeed.” Henderson’s spirituality is his release from anxiety, the demands of early success and the expectations that are part of the package.

“Whether you inspire one person or millions, that stuff means a lot more to me than winning or losing a fight,” Henderson said. “Don’t get me wrong, I don’t want to lose, but it’s not the end of the world. [Losing] sucks and I definitely don’t want it to happen again, but there are much bigger things I’m more concerned about. God, my faith and my walk with Christ is one of those.”

Couture’s motto as a fighter and a coach became, “Frame the positive.” To Henderson, patience is a virtue and a positive. Miller is a fine litmus test for where Henderson, a former champion, is at this stage of his career. November will be his fifth year as a pro and he’s a Brazilian Jiu-Jitsu Brown belt under John Crouch, a black belt under Royce Gracie. He insists what you’ve seen to date is a fraction of what he’s destined to become.

“Wait until I’ve been a black belt for five years and then see how I am. Give me another two, three years, man. I’m going to open up some eyes,” Henderson said. “I have a long way to go and it’s going to take a lot of time and hard work, but luckily I have all the time in the world. I’m only 27.”

A win over Miller puts Henderson in line to become a two-time lightweight champion. A loss and Henderson will be waiting an eternity, and not even Smooth is that patient.