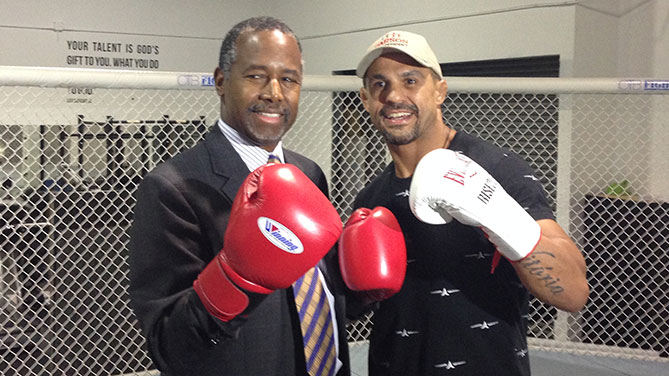 It should have been the typical media day in Boca Raton, Florida Tuesday morning, as middleweight contender Vitor Belfort met the press to discuss his November 7 rubber match with Dan Henderson, which takes place in Sao Paulo, Brazil.

Then Ben Carson showed up.

“I was so happy to meet a guy like him,” Belfort said of his visit with the Republican presidential candidate at his South Florida gym. “He’s the real deal.”

Belfort has long admired Carson and is planning on voting for him in the 2016 election should he become his party’s nominee, and after the camps of the fighter and the former neurosurgeon spoke, there was Carson, just before he heads to Colorado for the second GOP debate on Wednesday.

“We admire each other and I think he represents a level of leadership that doesn’t have an agenda,” Belfort said. “The problem of all leadership has always been what do I have to accomplish in terms of people that I owe things to? I think he doesn’t owe anything to anybody. He just has a vision, a passion, and I think people connect to him because of that. Simplicity is always best.”

But what about the 38-year-old former UFC light heavyweight champion? Is politics in his future?

“Life is politics,” he laughs. “Having three kids at home is sometimes like dealing with Democrats and Republicans when you’re choosing a restaurant. You just have to find what is best overall. People need opportunity, they don’t need a check, and we need to create opportunity.”

Belfort believes Carson is the man to do that, and while it was nice to break the monotony of media day for a little while, “The Phenom” is completely focused on next week and the conclusion of his trilogy with Henderson.

“Nothing is a distraction,” he said. “It was a life experience. It’s not every day that you meet a guy like him. If you read his biography, you see a man who came out of nothing and who had all the excuses in the world to become another guy in the projects, but he made his way. He’s very successful in what he does, he saved people’s lives and he changed people’s lives.”