After ending up on the wrong end of a record-breaking knockout, Ben Askren believes a win in Singapore puts him right back into the thick of the welterweight division.
By E. Spencer Kyte, on Twitter @SpencerKyte • Oct. 24, 2019

With just three words, Ben Askren put his first professional loss behind him.

Not long after landing on the receiving end of the fastest knockout in UFC history, Askren took to Twitter and made his feelings on the matter clear.

“Well that sucked,” wrote the veteran welterweight, whose highly anticipated clash with Jorge Masvidal at UFC 239 in July produced the clubhouse leader for Knockout of the Year and resulted in “Super Necessary” being added to the MMA lexicon. After a build-up that featured both men sharing their unfiltered opinions about the other, Masvidal ended things in five seconds, getting a running start before elevating and catching Askren with a perfectly placed flying knee that instantly shut off his lights.

And as far as Askren is concerned, it could have been worse.

“I think the worst thing that could happen is an extended ass-kicking where you get your ass kicked for 15 minutes; that would be terrible,” Askren said, reflecting on his first loss. “Obviously, that isn’t what happened — he hit me with one shot — and part of me wishes I had more of an opportunity to try to do something. But at the same time, it’s just, ‘Hey, that happened and there is nothing I can do.’ It’s done, so I might as well move on.

“But my genuine feeling is you get on with it when you lose,” he added. “You don’t sit and whine about it forever if it happens — you can’t change it, so you get on with your life.”

Which is exactly what the 35-year-old competitor has done. 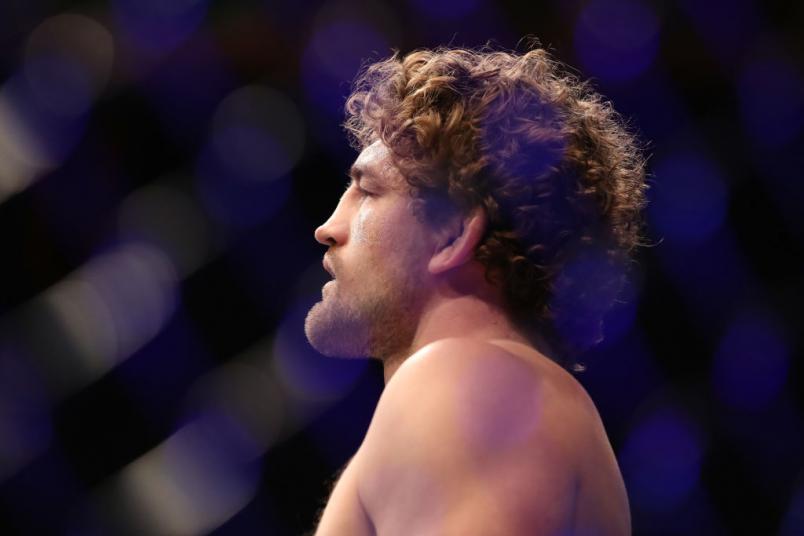 Not long after his bout with Masvidal, the two-time NCAA National Champion and Olympic wrestler booked his return bout — a five-round main event showdown with fellow grappler Demian Maia in Singapore that will go a long way to determining where each man stands in the shifting welterweight hierarchy.

“I think he’s someone that I’ve always wanted to test myself against,” he said of Maia, who has the second most wins in UFC history, two back of Donald Cerrone. “He is one of the best grapplers in mixed martial arts and he has been for a long time. I like that he has always stuck with his grappling roots as opposed to a lot of people who get flack from the crowd and they decide to change based on that.

"From a technical perspective, I think he creates challenges that I haven’t had to face before in my MMA career, so I’m looking forward to that, too.”

Maia entered the year on a three-fight slide and having turned 41 in early November of the previous year, many wondered if the Brazilian veteran should hang up his four-ounce gloves and pursue other endeavors.

But consecutive wins over Lyman Good and Anthony Rocco Martin have shown that Maia still has something left in the tank and prompted people to take a closer look at the results that left them prematurely writing his professional obituary.

“The only guys he’s lost to at welterweight are Tyron, ‘Marty,’ and Colby;” Askren said of Maia’s tetra-pack of losses to Tyron Woodley, Kamaru Usman and Colby Covington. “That’s one, two and three in the division.

“Those losses did knock him down quite a few spots, but at the same time, I also think people are short-sighted on that and I think a win against him puts me right back in a really good spot.”

Askren swiftly and correctly pointing out that Maia’s skid came against the former champ, the current champ and the man set to challenge for the welterweight title at the end of the year not only serves to shift perceptions of the man he’s set to face in Singapore, but also underscores how quickly opinions about fighters shift these days, something he’s acutely aware of after arriving in the UFC with an unblemished record and beginning his time in the Octagon with a pair of memorable appearances that didn’t quite go as planned.

Coming off a highlight reel loss that has played on a near constant loop within the MMA community since it happened and facing the scrutiny of fickle fans and observers who are now wondering if Askren could go “Three and Out” in the UFC should he lose to Maia in Singapore, does the now once-beaten wrestler feel any added pressure to post a victory that is memorable for all the right reasons as he readies to step back into the cage this weekend?

“I just want to go out there and execute the best I can, regardless of what my previous performances have been,” he said. “I want to fight the best I can and if that happens, I think I’m going to get a really dominant performance.”

And if that happens, Askren will end the year right back where he started — in the thick of the title chase, hunting down the best fights possible and handling everything that comes his way the only way he knows how: head-on.