Beltran Can't Wait To Get Punched In the Face

"I really feel like I’m in a good place. I’m in the same place that I
was mentally the last time I stepped into the Octagon." - Joey Beltran 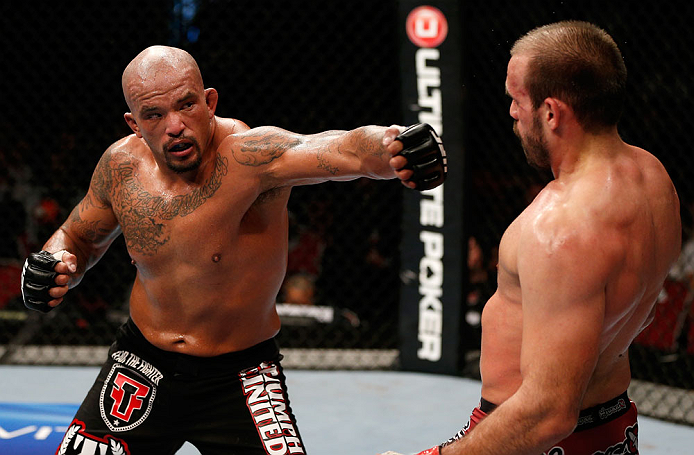 “I hate to steal a saying from a t-shirt,” an excited Joey Beltran begins before pausing to correct himself.

“Actually, it started out as the homie Kendall Grove’s tattoo. It says, “Only a fighter knows how it feels,” and it’s true. The only way I feel the most alive, the most at home and safe – as weird as that may sound – the world makes sense when I’m in there fighting. I haven’t had that for a long time, and I’m stumbling over my words right now because that’s how excited I am to go in there and fight.

“I’ve never been so excited to get punched in the face.”

Wednesday night, Beltran gets the opportunity to step back into the Octagon opposite Brazilian bomber Fabio Maldonado in a light heavyweight matchup that has Fight of the Night written all over it. For Beltran, it’s a moment he’s been looking forward to for quite some time.

Following his December bout with Igor Pokrajac in Australia, Beltran tested positive for the banned substance nandrolone. The impressive victory he had collected to close out 2012 was overturned and ruled a no contest, and the affable and engaging Californian known as “The Mexicutioner” was handed a nine-month suspension.

“As far as the positive result, I still to this day stand by my statement when I said that I did not inject nandrolone into my body,” reiterates Beltran, who will carry a 14-8, 1 NC record into his main card tilt with Maldonado on FOX Sports 1. “Obviously, something bad went into my body, so I have to take responsibility. I don’t know what it was, but what I decided to do after about two days of going crazy is just take it like a man, move on, serve my suspension, turn all these lemons into lemonade, and get better.

“I had nine months to get better,” he continues. “It’s the longest layoff I’ve had in my career, and it was really a blessing in disguise. I got to re-connect with my family, be there for my teammates as more of a teammate and a brother. I just really focused on my life – outside of fighting also. You’re forced to look at things from a different perspective.”

One of the things Beltran focused on during his forced hiatus was how he prepares himself for combat.

After more than five years of competing as a professional and three years in the UFC, the 31-year-old Alliance MMA representative tore down his previous approach and rebuilt it from scratch with the help of the all-star cast of coaches and fighters at the elite San Diego facility, and one new addition.

“I crossed paths with a gentleman by the name of Naudi Aguilar,” explains Beltran. “The best way I can describe him is a body mechanics coach, and what he introduced to me is a couple basic techniques that I’ve never had shown to me over all these years of training; stuff like basic myofascial release. He’s really taken care of my body, and not doing certain stuff.

“He’d ask me, `Why do you lift weights? Why do you do this? Why do you do that?’ and my answer was always, `That’s what I’m supposed to do.’ (Laughs) I never really could come up with an answer for him. It made me take a step back, think about the way I train, and completely revamp and restructure the way that I train. I honestly feel that meeting this guy has added at least five extra years on top of whatever I would have gotten out of my already pretty broken down body. I feel like I’ve gotten a new lease on life.

“I’m moving way, way better than I’ve ever moved in my career in sparring. A couple of the media guys were here filming for Alex (Gustafsson) and (Phil Davis’) fight not too long ago against Machida, and they made comments like, `You look way different.’ I feel different. (Laughs) I’m working hard. I’m excited.”

Despite a 2-3 record in the UFC, there aren’t a lot of people rushing to share the cage with Maldonado.

A former professional boxer, the granite-chinned light heavyweight is a punishing puncher, and near impossible to put away, leading some to borrow from Chan Sung Jung and dub him “The Brazilian Zombie.” The 33-year-old veteran likes to plant his feet and let his hands fly, and that has Beltran counting down the days until the two warriors share the cage in Barueri, Brazil.

“I really feel like I’m in a good place. I’m in the same place that I was mentally the last time I stepped into the Octagon – I’m really excited, really happy, and I just want to go out there and show what I’ve got. I’ve been working hard these last nine months. I kicked the can around – I was pretty depressed for 10 days or so after the result came out – and then after that I was like, `It’s time to go to work.’

“Fortunately, I got a good opponent. Unfortunately, he seems like a nice dude and a cool guy,” Beltran adds with a laugh. “He’s probably my type of guy. Fabio Maldonado seems like the type of guy you want on your side. If you’re going to get in a street fight, you probably want somebody like that having your back, but we’ve got to do the do on October 9.

“This will be my 10th fight inside the Octagon, and the old “Octagon jitters” as Joe Rogan likes to call them are pretty much gone; now its just business. This is where I belong, and this is where I do my thing. I’m excited, I’m pumped up, but at the end of the day, I have a job, and I know what I need to do and the positions I need to put myself into to defeat Fabio Maldonado. Now it’s just a matter of going out and getting the job done.”

And how does Beltran envision that happening?

“Honestly, I think I’m going to get a submission,” says the man who has just a single submission win to his credit thus far.” I’m thinking I will stop him in the third round – the middle of the third round. I’ve been working really hard on that with my coach, Jimmy Harbison. A couple months ago, I was promoted to my purple belt after a lot of years. (Laughs) I put on the gi and worked my way into that promotion, and I wouldn’t doubt it.

“It would not surprise me if I went out there and surprised some people, got a submission in the third round… after, of course, a crazy, brutal, knockdown, drag out fight.”