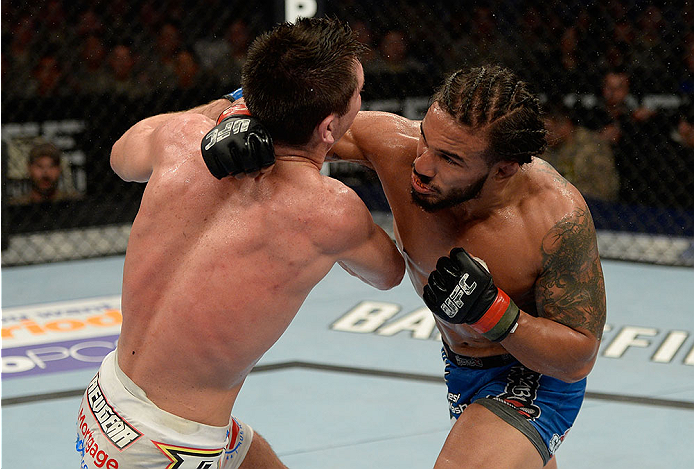 It didn’t take long for UFC featherweight Dennis Bermudez to get back in the gym following his November win over Steven Siler. That’s just the way he does things these days.

When you’re ranked 12th in the world in one of the toughest divisions in the sport, you have to be ready at all times. But at heart, Bermudez’ insistence on always being in a semblance of fight shape has less to do with the future, and more to do with the past. Namely, a 2010 submission loss to Jordan Rinaldi in his last bout before earning a spot on The Ultimate Fighter season 14 cast.

“I didn’t have a training camp for that fight,” he recalled. “I just moved to Long Island and I wasn’t in the gym where I’m at now. I was working two jobs 16 hours a day and my training camp for that fight was running around the block once, hitting the sauna, and maybe hitting the bag for three rounds. (Laughs) I was just so confident - and maybe even cocky, if you will - of winning, and that just wasn’t the case.”

The loss was his second straight. Two months earlier, he fought in a one night lightweight tournament in Oklahoma, and after beating UFC vet Shannon Gugerty in his first fight, he was matched up with another UFC alumnus in Drew Fickett, who was coming off a one round submission win over Charles “Crazy Horse” Bennett in his opening bout.

“They put me in the back, and it’s like ‘just be ready to go,’” said Bermudez. “So getting ready to go back out there again, I didn’t know what to expect. I remember the curtains opening and thinking ‘man, I really don’t feel like being here right now.’ My body already hurt from fighting once that night and I felt like I got hit by a train.”

Fickett made it short and sweet on Bermudez, submitting him in a little over two minutes. Couple that with the loss to Rinaldi, and the Saugerties, New York native had zero momentum heading into TUF 14. Three fights, three wins, and three finishes later though, Bermudez was in the finals against Diego Brandao. He would lose again in his UFC debut, but after being seconds away from a finish before getting caught himself in the Fight of the Night brawl, it was a little easier for “The Menace” to take.

“Even though it doesn’t show up on my record, I almost count that as a win…almost,” he said of the bout, in which he was submitted by Brandao via armbar. “I just dropped him and I was going in for the kill. What do you mean don’t put my arm there? I thought he was dead to the world. I look back at that fight, and eight times out of ten I would have done the same thing. I was going for the kill and trying to win. And I’m kind of okay with losing trying to win instead of losing trying not to lose.”

There’s been no losing of either kind since, with Bermudez running off a five-fight winning streak rivaled only by the equally prolific Cub Swanson among 145-pound contenders. On Saturday, he’ll look to pull into the lead with a win over Jimy Hettes, and even with Swanson sitting at number four in the rankings, Bermudez believes he’s on the fast track to a shot at champion Jose Aldo should he keep getting his hand raised.

“In my head, I win two more fights, my third fight is going to be a title fight,” said Bermudez matter-of-factly. And while Hettes will be a tough nut to crack this weekend in Dallas, the New Yorker has proven to be up to the task in his wins over Pablo Garza, Tommy Hayden, Matt Grice, Max Holloway, and Steven Siler, the latter victory coming at the Fight for the Troops 3 event in Kentucky. Despite the shutout scores in Bermudez’ favor, it was a competitive bout, one many believed had Fight of the Night potential before Rustam Khabilov and Jorge Masvidal grabbed the nod.

“I won, and I’ll walk out with a W over anything any day, but as soon as I walked out of the ring I’m like ‘ahhh,’” said Bermudez. “Then I got to the back, and people were like ‘this looks like Fight of the Night right now.’ I was okay with that. (Laughs) But when I didn’t get it, it wasn’t that big of a deal.

“The thing is that Siler is way, way tougher than people give him credit for,” Bermudez continues. “But you can’t judge a book by its cover. He’s not super muscular, and some fighters in the UFC, their faces are kinda scary (Laughs) and Siler looks like your normal Joe Schmoe. He’s very deceiving in that aspect and he’s good, man. I’m a huge Siler fan.”

More and more people are becoming huge Bermudez fans, and as the wins pile up, he’s getting better and better.

“I think I’m maturing as a fighter,” said the 27-year-old, who now makes his home in Lindenhurst, splitting up training time locally with Long Island MMA and Bellmore Kickboxing with work out in California with the Reign MMA squad. “I’m taking my time on certain things and not rushing to hit a guy instead of looking for a position where I can land a bigger shot later on. I did that a few times in the (Siler) fight. But I know what the crowd really wants. They want two guys to stand toe-to-toe and bang. Siler would have done that if I had gone with that game plan, but he knocked out Mike Brown, so why would I even risk maybe losing when I knew I could just take him down, land my strikes, and get him tired.”

That’s not to say Bermudez is looking to stall the action on fight night. Two Fight of the Night awards and one Submission of the Night bonus would say otherwise, but after three decisions, Dennis is looking to be a “Menace” to his opponents once again.

“I really want to start finishing fights and become the old Dennis Bermudez,” he said. “I’ve been fighting smarter fights, rather than just really trying to hurt a guy and I want to get the right mixture back in.”

Why now? Well, there’s a certain champion in Brazil that Bermudez wants to get his hands on, and if the opponents start falling, the call for him to get that shot at Aldo will get pretty loud pretty soon.