Whether It's The Wrestling Mat Or In The Cage, Bella Mir Has Her Sights Set On Greatness.
By Gavin Porter, On Twitter @ItsGavinPorter • Feb. 21, 2022

Bella Mir grew up on the mats, watching as her father Frank Mir rose to the top of the MMA world.

She watched him in the gym, saw his work ethic and witnessed him become the UFC heavyweight champion. Those early memories shaped Bella and made her want to compete in wrestling, jiu jitsu and MMA, just like her father.

It was inevitable that she would follow in her father’s footsteps, whether he liked it or not.

“My dad pushed softball; I was into softball. He pushed soccer, track, you name it. He was just hoping to God that I would never pick fighting. It’s hard to not pick it when you’ve been around it your whole life,” Bella told UFC.com. “I didn’t get serious with it until 14, when I was like, ‘OK this is probably what I’m going to do when I’m older.’ That’s when I finally knew that I was going to be a fighter, too.”

One of the moments when Frank knew he wasn’t going to be able to delay Bella’s desire to fight happened one day during a softball practice, when Bella dislocated her arm. The initial reaction of most athletes would be to get immediate medical attention.

Bella tried to hide the injury from her team and from her father because she couldn’t fathom the idea of missing practice. But her dad noticed and pulled her from the practice to get her to the emergency room as fast as possible.

To say that Bella was upset would be an understatement.

“She wouldn’t even talk to me in the car ride to the hospital,” Frank recalled. “She was so mad that I took her out of practice and I’m thinking, ‘You have a serious injury you suffered in practice; this isn’t even a game.’ That’s how competitive Bella is. It’s unlike anything I’ve ever seen.”

That competitive drive pushed Bella to become one of the most dominant high school wrestlers in the country and a professional MMA fighter at just 17 years old. If you haven’t realized it yet, Bella Mir is just built different.

And she proved that in competition. Bella graduated from Centennial High School in Las Vegas as a four-time state champion, a national champion and with a 2-0 MMA record. Leaving no doubt that she has star potential in whatever sport she sets her sights on.

“I’m going to set the bar even higher than my dad. I’m going to pass my dad 20 times from where he’s at,” Bella said. “That motivates me even more - that competitive nature - and that’s what makes me so driven.”

Bella’s future is so bright that UFC President Dana White took notice, inviting Bella to utilize the facilities and resources at the UFC Performance Institute as she gears up for whatever is next.

“[Dana] just gives me opportunities. There’s not many 18-year-old girls calling Dana and being like, ‘Dana I just won my fourth state title,’” Bella said. “For him to be proud of me, he’s like another dad. That’s how he treats me and how I treat him. I couldn’t be more grateful.”

For Frank, it’s a cool feeling to see the man that put the UFC heavyweight belt around his waist recognizing that his daughter is the real deal.

“Dana has been around professional fighters for decades and it just validates what I think,” Frank said. “He’s obviously an expert in the field and he knows I’m right about Bella. He looks at her and sees true superstar potential.”

Bella flashed that superstar potential when she submitted her second iKON Fighting Federation opponent by rear naked choke in December of 2020. It was a moment that Bella will never forget.

“I jumped and I sprinted into my dad’s arms,” Bella said. “I was like, ‘Dad I just passed her out! She’s passed out!’”

Although it was smooth sailing during her two fights under the iKON banner, Bella was ready for anything that would have come her way in those fights. Not just because of the lessons passed down by her father, but because of what she’s gone through on the wrestling mat.

In 2017, she lost a regional match on her quest to her first state title. She was in eighth grade and was defeated by a junior. But she battled back by winning every single match and beating that same opponent before winning the state title.

Last March, Bella mounted an incredible comeback after she found herself losing 8-0 in the first period of the Folkstyle National finals. How did she respond? By pinning her opponent in the second period.

“I was screaming, the entire arena was screaming and that feeling was amazing. That’s when I knew I could actually compete at this level,” Bella said. “I love overcoming adversity. It’s a mental game.”

Winning the national title helped put all the sacrifice into perspective for Bella. Thinking about the countless practices, collar steals, low singles, and reps that she put in to become a champion only fueled her competitive fire.

“I’ve never been to a party, I’ve been to one homecoming, I’ve only been to one dance. I miss dances, I don’t even hang out with my friends. I mean I’ve never even drank an energy drink before,” Bella said. “I’ve sacrificed everything, and I would say that it is so worth it.

“People say it’s lonely when you’re trying to accomplish something big,” she continued.

Bella’s big picture includes college national championships, an Olympic run and then a prolific MMA career. As it stands now, all of those goals have been set in motion.

Bella, 19, was recently accepted to the University of Iowa and plans to chase her dreams adding NCAA national titles to her resume this fall. She believes that focusing on wrestling will only make her transition to MMA easier and she’s confident in this approach thanks to proven success from UFC champions such as Henry Cejudo and Kamaru Usman.

“I’m going to be doing this my whole life and that’s why I’m sticking so much to wrestling,” Bella said. “Wrestlers are the most dominant fighters in the UFC, and I only have four years of wrestling left. I just know that after that I’m going to be fighting for 10 years.”

Preaching patience has been one of Frank’s biggest lessons for Bella. He has been very honest with her about all the things he’s done to be successful in combat sports and all the mistakes that he’s made along the way. He’s giving her the tools to push past what he’s accomplished.

Bella’s love for wrestling and for MMA has only strengthened their relationship and helped create something that is unbreakable. 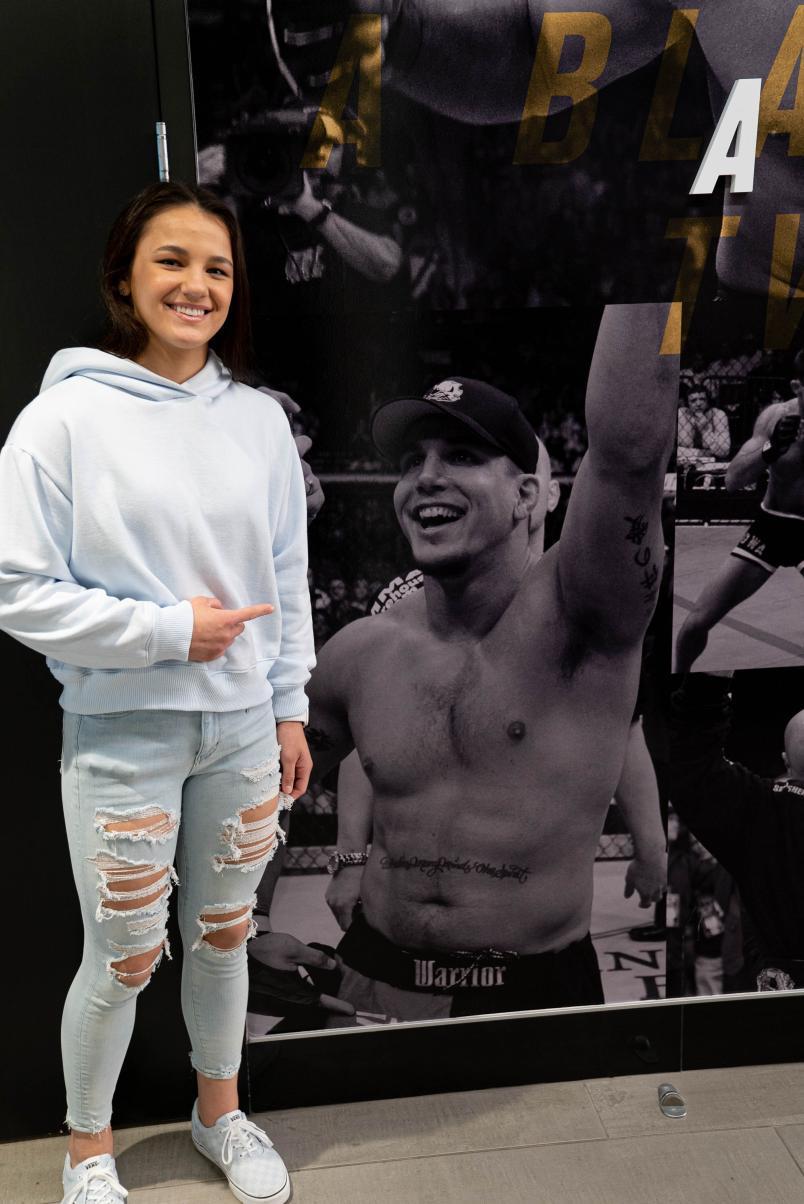 “We share this bond and this passion for the same thing and that means that I’m lucky because I have this part of her soul that looks at me like her hero,” Frank said. “I feel bad that some people lose that special father-daughter relationship, but in those moments after a match or fight, for a split second we have this moment where she’s still a little girl looking at daddy. It’s truly special to me.”

And he can’t wait to watch her journey.

“Before it’s all said and done, Bella will be one of the most decorated champions of all-time in women’s wrestling and MMA,” Frank said. “No human has been created that can derail Bella when she is focused.”

“There’s always another step to go and that just makes me crazy,” Bella said. “It’s obsessive. I’m obsessed with this.”