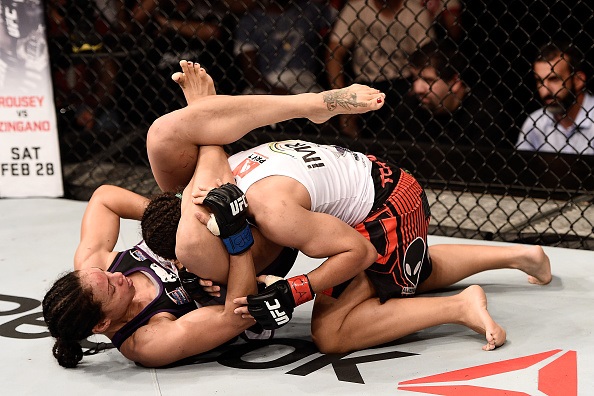 Fighting for the second time in seven weeks, Marion Reneau has gone from unknown to legitimate women’s bantamweight contender, as she submitted the number 10-ranked Jessica Andrade in the first round of their UFC Fight Night prelim bout Sunday at Ginasio Gigantinho in Porto Alegre, Brazil.

Using her sharp striking to bloody the nose of Rio’s Andrade, the 37-year-old Reneau – who defeated Alexis Dufresne at UFC 182 in January – was nonetheless dropped by the Brazilian a minute in. California’s Reneau recovered quickly though, locking in a triangle choke that forced Andrade to tap out at the 1:54 mark. 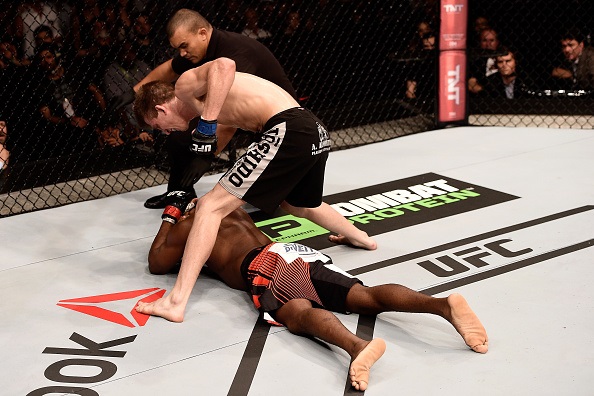 DWYER vs. MACARIO
William “Patolino” Macario was fired up to fight Matt Dwyer at the weigh-ins Saturday, but on fight night, it was Canada’s Dwyer who got the last word in the welterweight bout, scoring a first-round knockout win.

Kelowna, British Columbia’s Dwyer (8-2) was the busier fighter throughout, using his 6-foot-4 frame to its fullest, and when he fired off a Superman punch, it staggered Macario and sent him to the canvas face first. Rio de Janeiro’s Macario (8-3) covered his head, but a series of unanswered blows brought referee Wernei Cardoso in to halt the bout at the 3:14 mark. 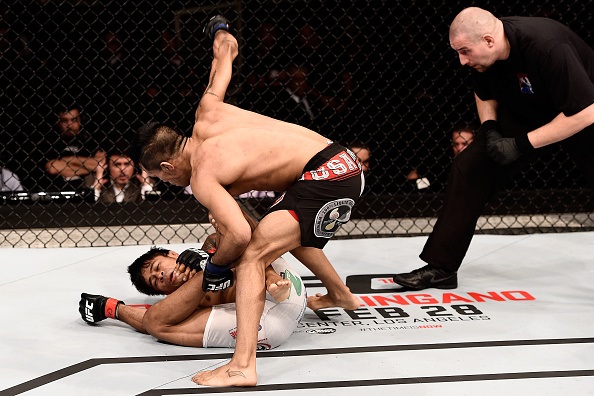 After eating some hard shots from De La Torre, Trator sought to battle it out in the clinch, but once the Arizonan got free, he rattled the Brazilian with another flush shot, this time dropping Trator with a left hook. The right hands that followed on the grounded Trator were simply academic, with referee Leon Roberts intervening at the 2:59 of the opening stanza. 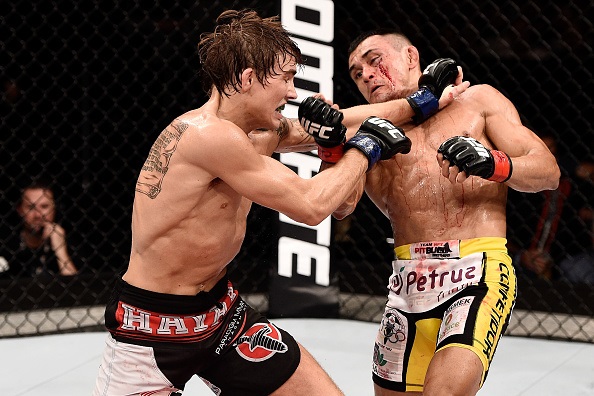 SILVA DE ANDRADE vs. GIBSON
Para’s Douglas Silva de Andrade made it one for one in his new weight class, as he successfully moved to bantamweight with a three-round unanimous decision win over California’s Cody Gibson.

It was a competitive, if not frenetic, first round, with both fighters having success at moments, but Gibson’s rangy attacks coming more frequently and opening a cut under the Brazilian’s left eye.

In the second minute of round two, Silva de Andrade showed his power off, dropping Gibson with a right. Gibson got back to his feet a few moments later and went back to work, showing no ill effects from the knockdown. A hard left hook by Silva de Andrade reminded Gibson of the Para native’s power with 90 seconds left, and the complexion of the fight had apparently changed.

Using his wrestling acumen, Gibson got an early takedown, but in the midst of a scramble, Silva de Andrade got top position and then returned to his feet. As the seconds ticked by, Silva de Andrade was visibly fatigued, but he kept throwing, ultimately doing enough to earn the decision. 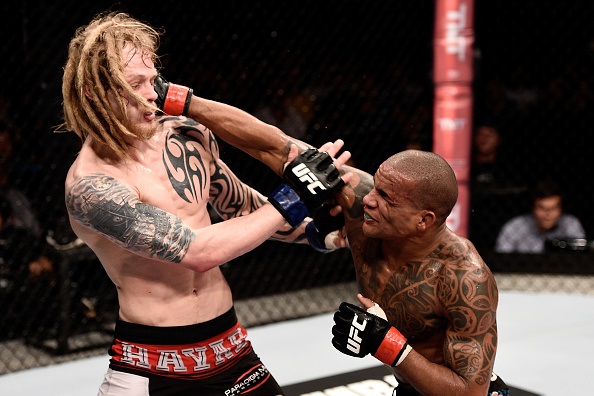 JORGE vs. SHOCKLEY
Florianopolis’ Ivan Jorge opened up the show with a win for the Brazilian contingent, decisioning Indiana’s Josh Shockley in a lightweight bout.

Engaging immediately, Shockley appeared to rock Jorge with two knees to the head, but Jorge locked up with his foe and got the first of two takedowns. After the second trip to the mat, Jorge locked in an arm triangle choke, but after a long stay in trouble, Shockley escaped and got to his feet, making it to the end of the round.

Shockley had luck at close range once more in the second, but Jorge took the shots well and landed with a hard right hand in response, even if he couldn’t get another takedown. In the third, Jorge did get a takedown, only to lose position to Shockley, who soon took the fight back to the standing position, but with the lack of action leaving the end result up for grabs, Jorge sealed the deal with a takedown in the final minute.