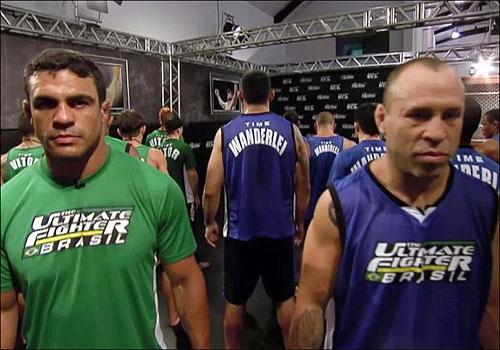 Two old rivals – Vitor Belfort and Wanderlei Silva - will finally meet again, this time as coaches on the first edition of The Ultimate Fighter Brasil, which begins auditions Wednesday in Sao Paulo, Brazil.

The announcement was made Tuesday in Rio de Janeiro.

“We could not be more excited about this,” said UFC President Dana White of the show, which premieres on Globo TV on March 25, with the finale taking place in June. “I think this show is gonna be a smash hit in Brazil.”

Middleweights Belfort and Silva first met over 13 years ago at UFC Brazil on October 16, 1998. Belfort won that night via first round TKO, and the two have since gone on to great success, Belfort winning the UFC light heavyweight title and Silva winning the PRIDE middleweight crown. Now the two icons will lead their countrymen as they battle to earn a UFC contract.

“I’m just focusing on this fight,” said Belfort, who faces Anthony Johnson at UFC 142 on January 14th before meeting Silva sometime later in 2012. “But it’s a great honor to fight Wanderlei again. I see it as a new fight and not as a rematch.”

“I’ve been waiting for this for a long time,” said Silva, nearly a month removed from his stirring stoppage of Cung Le at UFC 139. “I knew one day we would face each other again, and the time is here. This is one of the biggest rematches of all MMA and I’m very happy to give this to all of my fans.”