As Belal Muhammad Surges Past His Initial Goals Of 2021, He Heads Into The Final Fight Night Of The Year After Evolving Into A Rising Star, Both Inside And Out Of The Octagon
By E. Spencer Kyte, on Twitter @SpencerKyte • Dec. 15, 2021

Heading into 2021, Belal Muhammad was focused on breaking into the Top 15 and introducing himself to a larger audience, using this year as a catalyst to even bigger opportunities in the years ahead.

The 33-year-old has already done all that, and has a chance to take it up another notch this weekend when he steps in with perennial contender Stephen “Wonderboy” Thompson in the co-main event of Saturday’s final UFC show of 2021.

“When I started the year, I was unranked and I wanted to get into the rankings,” began Muhammad. “I wanted to fight the top guys, and I wanted to test myself against these guys. I wanted to be active, so to be ending the year fighting a guy like ‘Wonderboy’ that is respected by all, who has fought for the title twice, after I just beat a guy that fought for titles twice, it’s going to be amazing to end the year on a high note.” 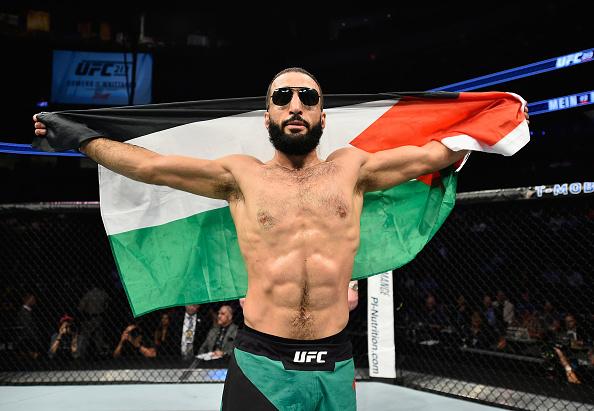 Muhammad kicked off the year with victory over Dhiego Lima in February, playing to his strengths by weaponizing his conditioning and pace to grind down the two-time Ultimate Fighter finalist in a battle contested largely along the fence.

A couple days later, a spot opened up against Leon Edwards in a main event two weeks down the road, and the Chicagoland native jumped at the chance to share the Octagon with the top-ranked Birmingham man in the final bout of the night. Nothing went as planned, as Edwards came out firing to control the first, and then accidentally poked Muhammad in the eye just seconds into the second round, bringing the fight to an anticlimactic halt.

While the result wasn’t what he had wanted, Muhammad’s willingness to raise his hand in that situation raised his profile and, combined with a handful of stints as an analyst for UFC broadcasts later in the year, the emerging welterweight was well on his way to making sure fight fans were going to remember his name in 2021.

“Doing my analyst work, the desk job has been a huge year for me so far,” said Muhammad, a rapid-fire talker who has also elevated his profile with his commitment to social media over the years, including his YouTube game show, Remember the Show.  “I think it helped show the UFC that they have a star on their hands; that they have somebody they can promote and that knows how to promote himself.

“It helps me with fighting too because I’m studying fights and it makes me realize, ‘Oh, this guy does that and that guy does this,’” he added. “It helps me see new things, and I’m able to work and be involved this whole time where it may have been four or five months since my last fight, but I was still going to Vegas, getting some training in down there, meeting new people down there doing this work — it’s a constant evolution.” 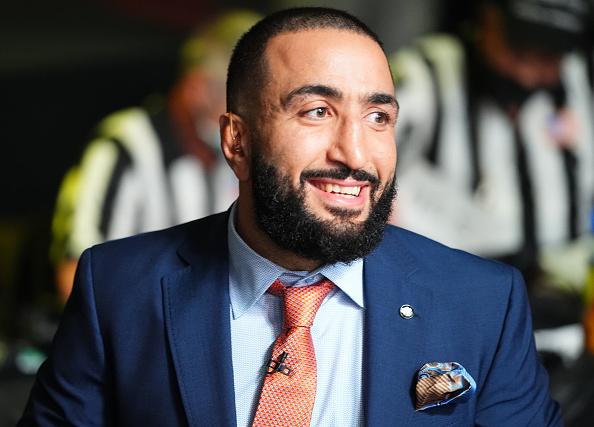 He returned to action in June and kept things moving forward with a win over Brazilian veteran Demian Maia, again deploying his personal brand of in-your-face pressure, extending his unbeaten streak to six and his record to 9-1 with one no contest since beginning his UFC career with one win in three starts.

Muhammad once again volunteered to face Edwards when his scheduled clash with Jorge Masvidal fell through late last month, but when that rematch didn’t materialize, he jumped at the chance to close out the year by sharing the Octagon with another tenured member of the welterweight elite.

“It’s fun because he’s a guy that I’ve watched before and always studied,” he said of Thompson, who dropped a unanimous decision to Gilbert Burns in July to halt a tidy two-fight winning streak. “As a fan, I love watching him, and I fought on the same card as him with he fought Tyron Woodley, so it’s cool to come around full circle and fight him.

“It’s less stressful too because he’s already a big name. You don’t have to promote it, I don’t have to trash talk the guy — I respect him and what he does, so there doesn’t have to be any wasted energy doing anything stupid.

“It’s the co-main event — people are going to watch it just because of the names that we are, and that’s a big thing.”

In addition to the ease of facing someone as respected and established as Thompson, Muhammad welcomes the chance to take on another specialist after he and his team had such success preparing for his bout with Maia in the summer.

“Having a team around me where it’s based on me, and they’re helping me out where they’re not worried about themselves because nobody has a fight right now, so they’re focused on being the perfect ‘Wonderboy,’” Muhammad said of his team at Valle Flow Striking, consisting of head coach Mike Valle, his long-time wrestling coach Louis Taylor, and training partners like Horacio Gutierrez and Ignacio Bahamondes. “I have the right team around me, and we’re very good at focusing on specific things that he does.

“For me to go from fighting one specialist where we had to train specifically for him, and now we have another specialist, a good understanding of our practices and knowing what we need to do.”

So too does everyone in Muhammad’s life, the MMA Twitter universe, and anyone else that watched Thompson’s fight with Burns in July.

“It’s always funny when someone goes in there and beats him in a certain way,” began Muhammad, chuckling with every word. “So Gilbert Burns took him down, and everybody is like, ‘All you’ve got to do is take him down’ when there are a million guys before me that tried to take him down.

“Just because Gilbert Burns did it doesn’t mean it’s going to be easy.”

But Muhammad has never been one to seek out an easy path. Instead, he’s taken every fight that has been offered to him and raised his hand for more than a few challenging short-notice assignments too.

He’s occasionally stumbled, but each time he did, he’s dusted himself off and gotten right back to work, putting together the kind of resume that coaches and contemporaries respect. 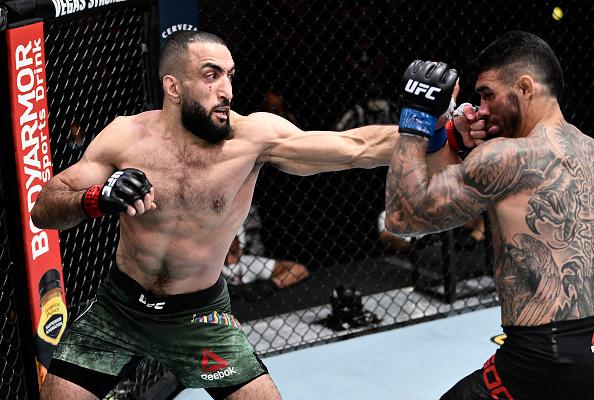 And now, having already accomplished what he set out to do at the start of the year, he’s poised to step back into the fray one more time, knowing what a victory over Thompson means and he is focused on bringing it home for the holidays.

“I have to go through him to get to that next level where they’re talking about contenders,” he added. “If you get through him, there is nothing anyone can say.”