No matter what happens in Belal Muhammad's career he is focused on putting his full effort into everything he does inside and outside the Octagon.
By Thomas Gerbasi, on Twitter: @TGerbasi • Sep. 4, 2019

The Tweet, posted on August 25, said it all for Belal Muhammad.

“When you die, die on E,” he wrote. “Leave no dream left behind guys. Leave no opportunity left behind. When you leave this earth, accomplish every single thing you can accomplish.”

The 31-year-old welterweight didn’t always feel that way. Blame it on his youth, or the fact that many of his peers (in and out of the fight game) aren’t thinking big picture. To them, what matters is right now or in the near future, and if they do fight for a living, it’s all about the belt.

Muhammad, who faces Takashi Sato in Abu Dhabi this Saturday, wants a belt, too. But it’s not all about what happens in the Octagon. It’s about the journey to fight night, and what happens in the days, weeks, months and years after the final horn sounds.

“It came to me within the last three, four years,” he said. “I was just realizing what kind of platform I have right now and a lot of people don’t get this opportunity. I wouldn’t be able to do this if I had a normal job.” 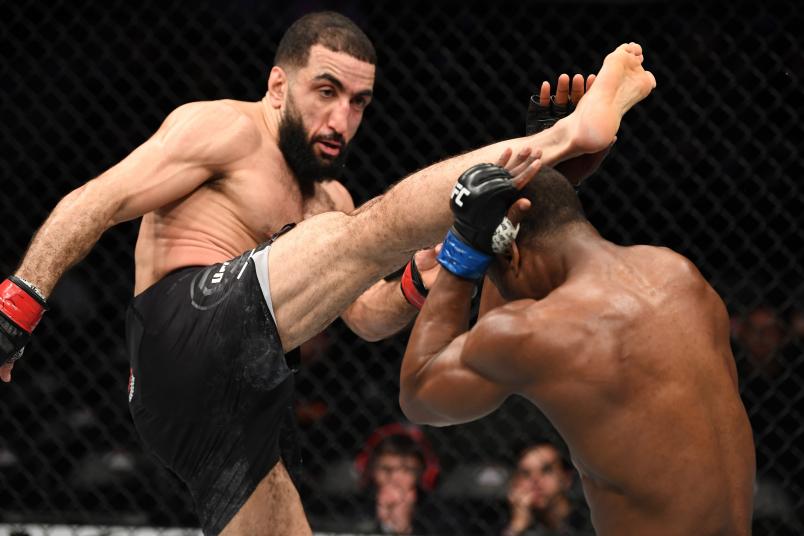 True, Muhammad’s job is far from normal, and as he made it to the UFC in 2016 and made a name for himself as a fighter to watch in one of the sport’s toughest weight classes, he began to see that what he did for a living had an impact on people he never even met before.

“At first, I was sitting there, ‘I’m a fighter, and if I get there to the belt, then it will mean something,’” he said. “But then you realize that people from all over the world are looking up to you and watching you and paying attention to what you’re doing. It put everything into perspective.”

As messages came in from around the world, telling him how he was being an inspiration, Muhammad began to embrace more than just the fight and the slow climb to the top. He talks of the memories he’ll have of the people he’s met along the way, of his travels to places like Australia and Abu Dhabi, but some of the moments he’ll remember most will be the ones with his teammates at Roufusport.

One of them – Paul Felder – is in Saturday’s co-main event, and another – Jared Gordon – is on the trip to the UAE with his squadmates. It’s the way Milwaukee’s finest do things.

“That’s why I love Roufusport,” said the Chicago-born Muhammad. “It’s literally like a family in there and nobody has an ego. You go to some gyms and some guys won’t be in the UFC and they’ll try to go hard with you just to prove themselves. And I’ve been to gyms like that before and I’ve been to the gyms where guys will go super hard and try to kill each other in sparring. You’re not getting paid to spar. At Roufusport, we’re all trying to help each other get better. Jared just fought and he was back in the gym, helping us train because he wants to help us. He’s flying to Abu Dhabi with me and Paul, and it’s that camaraderie. And when you know you have friends like that, it means a lot. It’s not like having training partners, it’s more like having brothers and it makes that whole gym environment so much better.”

It doesn’t hurt that the trio are able to find levity in this toughest of sports and make each other – and those watching from afar – laugh. And thanks to social media, fans have been able to see their personalities and get to know them better than in most cases of the fan-athlete interaction.

“A lot of guys don’t know that this is part of the game,” said Muhammad. “You have to be on social media and you have to be personable with your fans and post stuff. That’s what I’m trying to tell these young fighters coming up – social media’s a big part of the game because people get to know the real side of you and see that you’re a normal person.”

And going back to the big picture, fans who may have built in preconceptions about Muslims or Islam will find out that this devout Muslim is just like anybody else. That’s important to Muhammad, a Palestinian by heritage who believes that once fans see Saturday’s card and learn the stories of the Muslims on UFC 242, it will shine a light on folks who often get misunderstood or stereotyped.

“A lot of people just don’t know what this religion is about,” he said. “On this card, when you see all these guys being humble and respectful and see what type of guys these are and that they’re really good fighters as well, you’ll see what they’re doing. It’s going to be huge to see these guys representing the sport and representing a religion that I love and that is all about peace and respect. And that’s what I feel martial arts is about as well.”

Sounds like there will be more than a few memories made for Muhammad to bring back home with him, reinforcing his Tweet that life is about being an active participant and not an observer.

“At the end of my life, whether I get to the championship or get a title or not, I’ll know I went for it and I left it all out there.”