Belal Muhammad Looking To Break Through at UFC 258

13th-Ranked Belal Muhammad Is Hoping To Continue His Rise In The Welterweight Division At UFC 258 Against Dhiego Lima
By E. SPENCER KYTE, ON TWITTER @SPENCERKYTE • Feb. 11, 2021

Over the last couple years, Belal Muhammad has become a must-follow on social media, showcasing his unique personality in an assortment of recurring ventures, including his “Bully’s Bicks” predictions, multiple Tony Ferguson training videos, and his weekly YouTube game show, Remember the Show.

“For me, I love to be interactive with the fans and show them my personality because a lot of people are afraid of fighters,” said the charismatic welterweight, who takes on Dhiego Lima this weekend at UFC 258. “They think fighters are mean or angry guys and then when they meet me in person, they’re like, ‘Oh my God, you’re so nice and funny.’ That’s why I try to do the show where it’s a different type of show — it’s a fun show where I can bring out other fighters’ personality.

“All these fighters have different personalities, great personalities, so this type of show that I’m bringing makes the fun come out of you because it’s not like Fight Week where you have the same interviews like, ‘How you feeling? What’s going to happen in the fight?’ 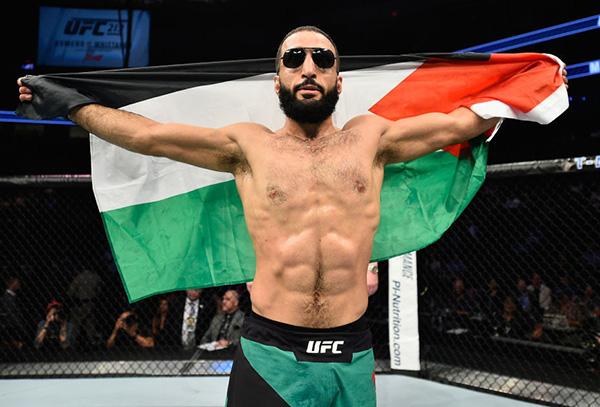 “It’s the same old questions, same old answers, and if you’re a fighter that doesn’t like to do interviews, you’re going to give boring answers,” continued Muhammad. “But for a guy like me, I like talking to people and being talkative in general, so for me, it’s having fun and showing my personality and getting people to want to tune into my fights.”

Part of the impetus for putting his personality on full display was that trying to draw fans in with flashy performances inside the Octagon isn’t his style, and cost him the last time he got caught up thinking about doing exactly that.

Muhammad entered the 2019 campaign on a four-fight winning streak that carried him to the fringes of contention in the welterweight division and a showdown with surging Contender Series graduate Geoff Neal on the first fight card of the year.

Having gone the distance in each of his four victories, the Chicago native wanted to make a statement and convinced himself that if the fight reached the third round, Neal would break and an opportunity to finish would present itself, but that didn’t happen. Though he turned in another gutsy, gritty effort, Muhammad landed on the wrong side of a unanimous decision verdict and vowed to never make those same mistakes again.

“For that fight, I was like, ‘I need to be more exciting, do some ‘Showtime’ stuff,’ but that’s not me,” admitted the 32-year-old, who has collected three straight victories since sharing the Octagon with Neal. “I need to be myself, keep doing what got me to the dance — keeping that pressure, keeping that in-your-face style, and hurting you. 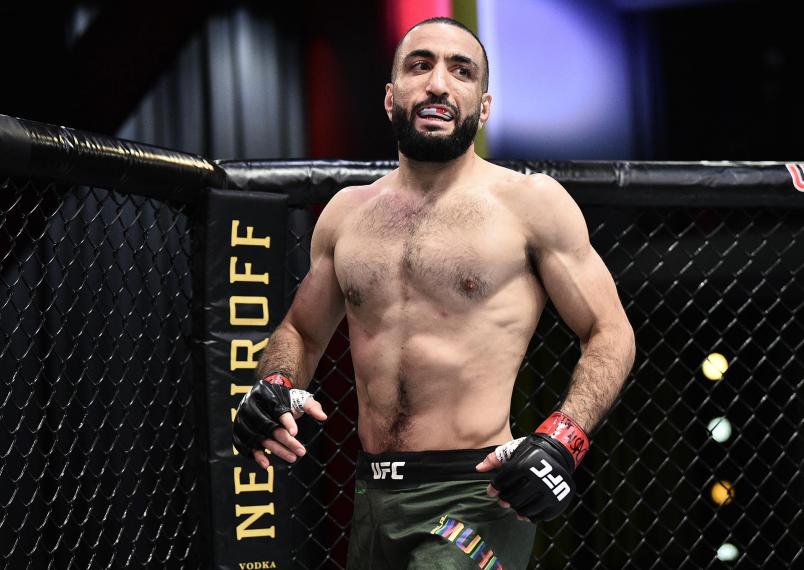 Despite his three-fight winning streak and 7-1 mark over his last eight fights, the 13th-ranked Muhammad has struggled to garner the marquee assignments that can potentially carry him further up the rankings and into contention in the talent-rich welterweight division.

MORE UFC 258: How To Watch UFC 258 | Kamaru Usman: Warrior Code | Fighters You Should Know | Ian Heinisch Ready To Unleash 'The Hurricane 3.0' | Back to the Future: Maycee Barber Eyeing Triumphant Return

It’s the type of thing that would prompt some fighters to use their platforms to demand greater opportunities and take aim at contemporaries they believe are actively avoiding them, but not Muhammad, because he knows where he stands in the 170-pound ranks.

“A lot of fighters know how good I am — that’s why a lot of them are afraid to fight me and take this fight,” he said. “I know that a lot of guys say no to me, so for me, it’s about staying the course and staying patient. 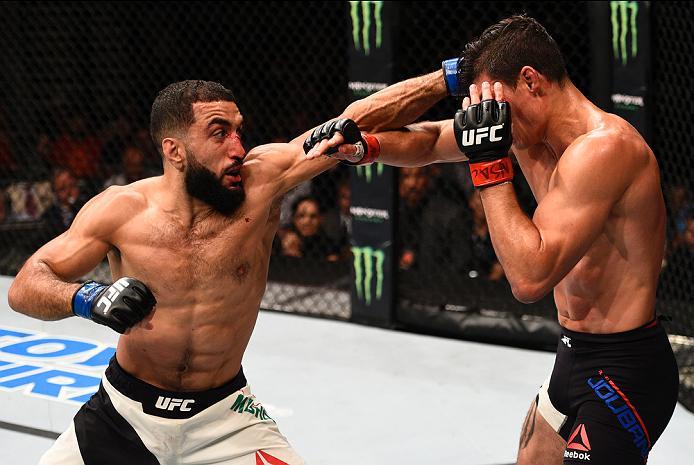 “I know that my levels are good enough to be with the best guys and I know that I’m going to be a champion,” he added. “I don’t need to force it, I don’t need to talk about it — as long as I keep going out there and winning, it’s going to come to me.”

He’s also quick to point to another welterweight that always remained true to himself and only ascended to stardom later in his career as a reminder to simply keep doing what he’s doing.

“(Jorge) Masvidal has been this good, he’s always been the same guy, the same personality — he’s always been this way, but he never got that shine,” he said of the Miami-bred veteran who grabbed the spotlight in 2019, more than 15 years into his professional career. “It took one fight to make something click where fans started to love him and everything started going the right way for him, and it was later in his career.

“I feel like for me, if I keep being myself, keep being me, it’s going to be the same thing.”

UFC 258: Inside the Octagon - Usman vs Burns

But that doesn’t mean he’s not going to keep doing everything he can to maximize his opportunities.

In addition to remaining active and engaging on social media, Muhammad intends to turn his trip to Las Vegas for UFC 258 into a multi-week stay so that if he comes out of Saturday’s clash with Lima without any injuries, he could potentially make an immediate turnaround and take advantage of any openings that come up during this extended stretch of events being held at the UFC Apex.

“God-willing I’m healthy after Saturday, I want to get right back into it because this is a time where guys can make a name for themselves and an era where people are tuning into the UFC a lot right now,” said Muhammad, who watched ultra-active competitors like Angela Hill and Kevin Holland use their constant readiness and a string of quality performances to catapult them further up the rankings in their respective divisions last year. “If you’re the guy that is always willing to say yes, you can blow up, and I want to be one of those guys. 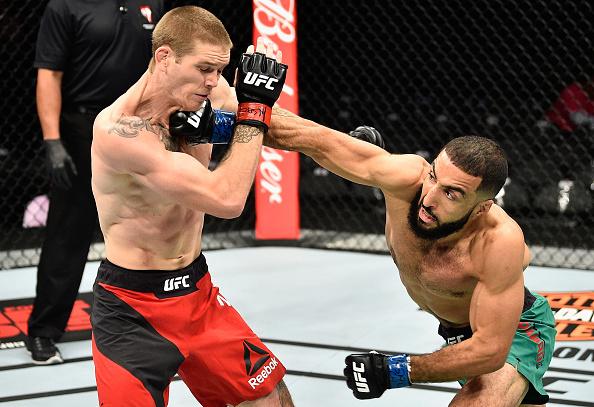 “Jared Gordon is fighting next week, so I plan on staying out here, watching that fight, and staying out of the Chicago snow; it’s so cold down there right now that I don’t want to go home,” he added, giving a shout out to his close friend and former roommate, who faces Danny Chavez next weekend.

“I like to train at different gyms, get different looks, so maybe I’ll stay out here for a couple weeks. Xtreme Couture has always been inviting me to come down, check it out, so if I’m healthy, I’m going to stay down here and stay ready.”

But the first step in having an active and successful 2021 is getting things started with a victory on Saturday, which for Muhammad comes down to one thing: being himself.

“For me, it’s just being myself — staying in his face, keeping the pressure on,” he said. “I feel like I’m better than him everywhere, so it’s just about going out there and using all my tools; starting fast and starting early.

“I usually pick up more in the second and third round, but I’ve been working on starting fast and breaking guys earlier,” he added. “If you look at six of my last seven wins, I had guys in finishing spots where I took their backs and they were close to breaking, so I know I’m at the point where I can finish these guys, so I just have to start fast and they’ll break.”

If that happens and he comes away unscathed, don’t be surprised if you see Muhammad again in the next couple weeks, jumping into a short notice opportunity, chasing another victory and a chance to climb even higher up the divisional ladder.

But even if it doesn’t, you’re still going to be hearing from him because his personality is infectious and his social media presence continues to grow, which means one way or another, you’re going to end up remembering his name.