Belal Muhammad Is Hungry For Another Main Event

UFC 263 Is Belal Muhammad's First Step To Getting A Rematch With Leon Edwards
By Maddyn Johnstone-Thomas, on Twitter @MaddynThomas • Jun. 10, 2021

Belal Muhammad is on Team Nate Diaz this weekend.

That’s no surprise, considering that Diaz’s opponent is one that Muhammad hasn’t forgotten since March: Leon Edwards.

“I definitely want that fight back,” Muhammad said. “He’s still ranked number three and he’s still one of those guys you want to go through. But also because of the way that he talked after that fight, saying that it was going to be an easy fight, but it was only one round out of an extra four rounds. He can say what he wants, but when we get that fight back, we’ll really see what will happen.”

The two UFC welterweights faced off against each other in March, with Muhammad riding a four-fight win streak into his first main event. The bout was ruled a no contest 18 seconds into the second round due to an accidental eye poke from Edwards.

"I'm not one of those guys that needs to hate you to fight you, but we're going to compete and I'm definitely going to put these hands on him."

Despite the two being on the same card on Saturday, they won’t be competing against each other. However, this is one step closer for them to meet again.

“I think it works out perfectly that he’s on this card because you see that if he loses to Nate Diaz, then obviously the fight makes the most sense in the world,” Muhammad told UFC.com “I’m going to be rooting Team Diaz here.” 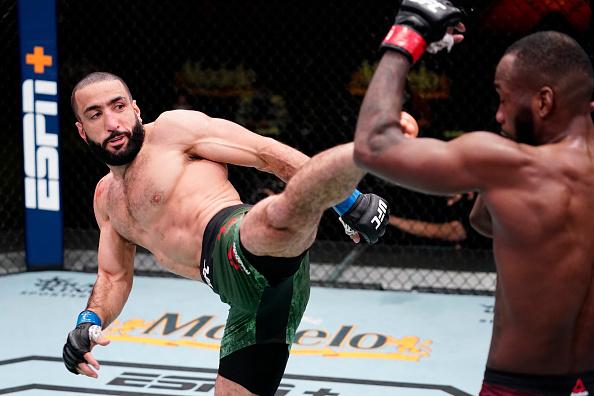 Even after the disappointing result, the Chicago native remained positive. He didn’t want to dwell on the past and wanted to focus on the things ahead, which was getting another fight and preparing to win.

That next fight will be this weekend against Demian Maia, a well-respected fighter that has been in the UFC since 2007. With a record of 28-10 compiled over the course of a career that began in 2001, the 43-year-old Maia has talked about how this could be his last fight. Yet Muhammad knows the skill that Maia still brings to the Octagon.

“He’s one of those guys where I always wanted to know how good I would be against that guy because he has a specific style,” Muhammad said. “Everybody knows what his style is and what his grappling is. He’s one of the best grapplers to ever do it. All the guys I’ve fought in the UFC have been strikers, so I want to show these people that I’m good everywhere. Now I get to prove it Saturday night.”

Three of Muhammad’s four previous wins were via unanimous decision, with the other one being a submission victory over Takashi Soto. At UFC 263, he’ll be going against an opponent that has 14 wins by submission.

“It’s about not overthinking it,” Muhammad said. “For the first three or four weeks, I was all about defense, defense, defense. Then my coach was like, ‘We need to be more offensive. We need to stop thinking like that and being afraid and just be you. You’re good everywhere, regardless.’” It’s about just being myself. It’s about not overthinking it and just going out there and knowing that no matter what happens, I’ll be ready.” 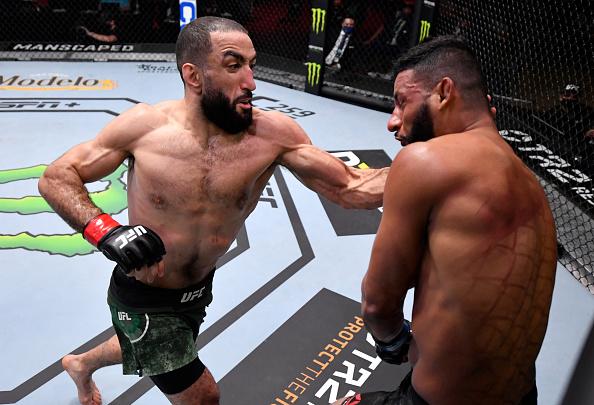 Don’t be fooled. Even though this could be Maia’s last fight in the UFC and has the respect of many across the world, including Muhammad, the 32-year-old isn’t going to go easy on him.

“There’s respect there, but I’m not going to sit there and walk up to him and shake his hand at the fight,” Muhammad said. “I know what I need to do to do this. I’m not one of those guys that needs to hate you to fight you, but we’re going to compete Saturday night and I’m definitely going to put these hands on him.”

His game plan to come out with a victory is simple.

“I feel like it’s going to be a lot of on the feet,” Muhammad said. “He’s going to be shooting a lot and then by the end of the second you’re going to see him breaking and folding a little bit and that’s when I’m going in there for the kill.”

Taking home a win could bring him one step closer to get that rematch against Edwards.