Belal Muhammad Is Only Here To Be Champion

Belal Muhammad is exactly where he said he was going to be.

Last February, as the Chicago native readied to face Dhiego Lima at UFC 258, he laid out his plan of attack for 2021 and shared his thoughts on where he fit within the welterweight division.

That card was headlined by a championship clash between Kamaru Usman and Gilbert Burns, and Muhammad was ready to step in and face either one of them if need be, fully confident in the fact that he could hang with the reigning champion and No. 1 contender, even without any real prep time. If that didn’t happen and his assignment remained unchanged, he was intent on handling his business with Lima in clean fashion and making a quick turnaround, seeing the year and the UFC’s residency at the APEX as a chance to fight frequently and catapult himself into the upper echelon of the 170-pound weight class.

“I had a plan and I had it set in my mind of where I want to be,” said Muhammad, recalling that conversation just a few days prior to sharing the Octagon with Vicente Luque in the main event of Saturday’s return to UFC APEX. “I want the gold — gold is the goal — and I see it; I know how I have to get there.

After defeating Lima last February, Muhammad did, in fact, make a quick turnaround, subbing in for Khamzat Chimaev opposite Leon Edwards a month later in a main event fight that ended in a no contest verdict following an inadvertent eye poke.

Three months later, he jumped into the cage with Demian Maia and out-hustled the former two-division title challenger to extend his unbeaten streak to six. In December, he pushed that run to seven by toppling Stephen “Wonderboy” Thompson, using his high-pressure style to neutralize the talented striker.

And now, a tick under four months later, he’s stepping in with Luque, who arrives on a four-fight winning streak, having earned consecutive first-round submission wins over Tyron Woodley and Michael Chiesa last year.

“I’m not sitting on my ranking,” said Muhammad. “I’m not camping out and being happy, being comfortable. 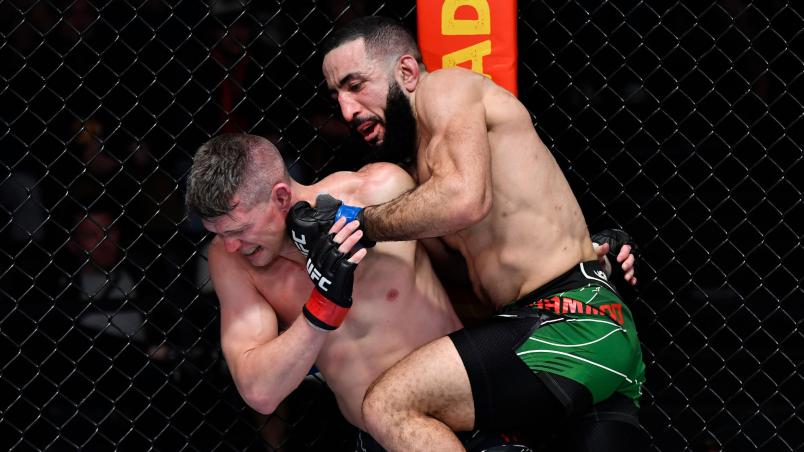 “After the ‘Wonderboy’ fight and that performance, there are guys that would have been like ‘I’m going to have a parade for a second, chill out a little because I just dominated ‘Wonderboy’ and I’m No. 5 in the world,’ but for me, it was like, ‘Who you got next?’

Although he clearly has his sights set on the top of the division, the 33-year-old is also self-aware enough to know that his path to fighting for championship gold was always going to be very different that the one some of his contemporaries and fellow hopefuls will travel.

“I know that there isn’t going to be an easy road for me,” said the surging welterweight, who has gone 10-1 with one no contest over his last dozen appearances. “There’s not that, ‘Now he’s guaranteed this or he’s guaranteed that.’ I have to earn every little thing, so I’m working with the mindset that I’ve got to go five, four, three, two, one — I’ve got to get all those and then that’s when I get my championship fight.

“I know I have to fight the best guys and once I’m the champion, when I’ve already gone through those Top 10 guys, it’s only going to be easier the second time around.”

And he’s getting a head start on working his way through the division a second time this weekend.

Saturday main event is a chance for Muhammad to exact some revenge on Luque, who handed him the first and only knockout loss of his career when they met more than five years ago at Madison Square Garden on the UFC 205 prelims.

Despite having lost only once in a dozen fights since and working his way into the Top 10 in the welterweight division, it’s a result Muhammad still hears about regularly, and he’d like nothing more than to continue his march towards a championship opportunity by changing the way people remember things between he and Luque playing out.

“This is the one that you have to deal with because you still remember that day, how you felt that day, and still see it all the time because you have trolls and everybody always sending you pictures and videos of it,” he said with a laugh. “It could be the only time you got knocked out, but that’s always the one they go back to; that’s the one people are trying to be funny about; that’s the one that people are like, ‘D’you remember that fight?’

“I want to erase that from memory and I get my chance this Saturday,” he said. “There are a lot of guys where you get knocked down and you want to get that rematch right away, and of course you wanted that, but I wasn’t at that point of my career where I was able to get that.

“Now I feel like I’ve earned it, I’ve evolved enough to where I deserve it, and I’m going to show what a real fight between us is going to be.” 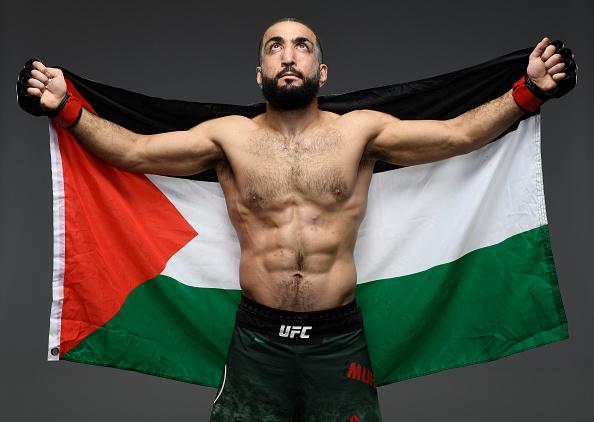 Belal Muhammad poses for a portrait after his victory during the UFC 258 event at UFC APEX on February 13, 2021 in Las Vegas, Nevada. (Photo by Mike Roach/Zuffa LLC)

Luque has been just as successful since their first encounter, posting a 10-2 record over his last 12 fights, collecting finishes in nine of those victories, including each of his last four wins to enter Saturday’s contest stationed one place ahead of Muhammad in the rankings.

Muhammad is No. 6; Luque is No. 5 — the next number he’s got to cross off in order to continue his climb to the top.

“I know what I need to do in order to get them talking is to keep winning,” said Muhammad, who admitted he’s fueled by constantly being left out of the discussions of possible title challengers in the welterweight division. “There is no denying me if I keep winning.

“This is my third Top 5 guy and there is nobody else in the welterweight division that is saying yes to three Top 5 guys in a year. This is my fifth fight in 14 months; I’m staying in there.”

And he plans on continuing to stay in there, facing the next man ahead of him in the rankings each time out until he reaches his goal.

“I’ll have had to go through the dog days, but in the end, it’s going to be like Dustin Poirier says, ‘Paid in Full.’

“It’s all going to be worth that much more once I get that strap.”