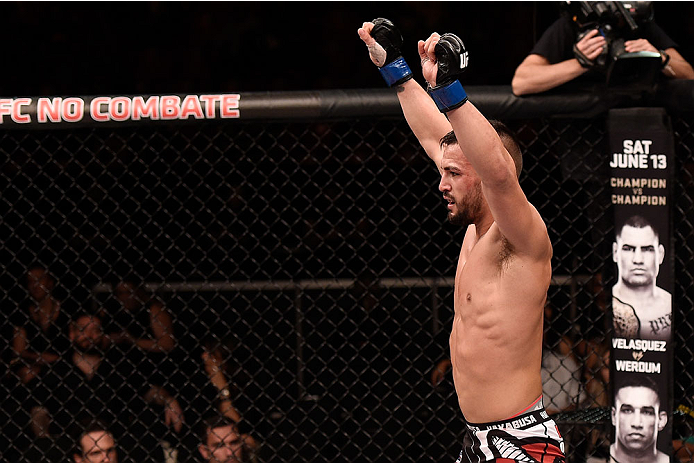 Mirsad Bektic has endured a whirlwind week already – and it had nothing to do with his travel to the United Kingdom.

The Bosnian-born Bektic has had three different opponents for this weekend’s UFC 204. Originally, the American Top Team talent was scheduled to face Arnold Allen, but an injury forced him out and Jeremy Kennedy replaced him on the card earlier in the week. Unfortunately, Kennedy also got injured, and now Russell Doane has stepped up.

Not the ideal build-up for Bektic, for sure, but he’s not bothered.

“I don’t worry about it, I just focus on myself and I’m confident about my preparation and my team,” Bektic said. “We train for every style – left handed guy, right handed guy – it’s perfect, it’s going to bring out the best in me. I look forward to it.”
RELATED: Bektic matchup with Russell Doane | Fighter bio

Regardless of the opponent, many eyes will be on Bektic as he returns to the Octagon for the first time since May 2015. The 25-year-old featherweight is undefeated in 10 fights as a professional, including a 3-0 mark in the UFC. His bout against Doane opens up the Pay-Per-View portion of UFC 204, his most high-profile position yet on a UFC fight card.

“This is how I roll. I believe I am the best in all aspects of martial arts and I believe this is how you show it – you go through different things like this, different opponent changes, and you just show what’s up,” Bektic said. “Yeah, Russell Doane, he’s a tough kid. Very tough guy. Great at what he does but it’s me … I feel phenomenal, I feel like a champ.”
Jorge A. Mondaca is managing editor of UFC.com. Follow him on Twitter at @JorgeAMondaca