Being a fighter is what Condit is here for

Getting ready for his first bout since August 2016, Carlos Condit admits that he could probably do without the days leading up to Saturday night’s return against Neil Magny. But knowing that the end of the week means that he gets to fight again does put a smile on the face of “The Natural Born Killer.” 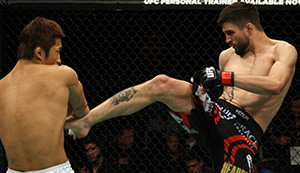 “I love and I hate fight week,” he said. “I hate it because it’s tough. There’s a lot of anxiety and emotional ups and downs, but I also love it because getting through that and then getting to the fight and doing it, it’s what I love to do. If I love anything on this Earth other than hanging out with my kids and being a dad, being a fighter is what I’m here for.”

Some wondered whether he would make that walk again after his loss to Demian Maia. Seven months earlier he lost a razor-thin decision to then-welterweight champion Robbie Lawler in an instant classic many thought he won, and when Maia made quick work of the Albuquerque native, it looked like Condit’s heart wasn’t in the grind anymore.

“It ebbs and flows day to day, week to week, month to month throughout my whole career,” said the former WEC and interim UFC champion at 170 pounds. “It’s been a rollercoaster. If this thing was easy to do, then everybody would do it. Do I love every aspect of it? No. But ultimately, I’m a martial artist, and deep down this is what I love to do. The pursuit of greatness through physical violence, it calls me for whatever reason.”

Few do it better. A pro since 2002, Condit has seemingly been around forever, but a look at the calendar still sees him at just 33 years old. But after 40 fights, life changes and so does motivation. With a pair of belts, seven post-fight performance awards and the status and respect that come along with being one of the best of his era, what pushes Condit to go through the training camp grind, cut weight and then get into a fistfight at the end of the cycle? Is the goal still a world title?

“I know it’s cliché, but I’m focusing on what I’ve got right now in front of me,” he said. “I don’t have loftier goals. My goal is to go out and put on a hell of a performance Saturday night and do my thing. Fight the way that I fight and that’s it.” 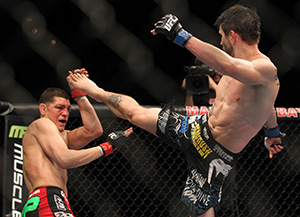 That should be enough for us when it comes to someone who has always delivered a fight when his name was called. And at 33 years old, he may want to do this for another ten years. Or he might not. Whatever happens after Saturday night, he’ll deal with it then.

“I’m an athlete and a martial artist until the day I die, but I don’t know,” Condit said when asked if he’ll still be thinking he’s got another fight left when he’s 50 years old. “I’m gonna stop tap dancing around potential retirement and I’m just gonna take it as it comes and see how it goes. But I don’t see myself stopping training, stopping the pursuit of knowledge and bettering myself as a martial artist when I’m done with this.”

No, Carlos Condit is a lifer. And this weekend we get to see him do what he does best.

“This is what I know and this is how I can make money, pay bills, and I still love it and am able to do it, and I’m excited,” he said. “I’m excited to come back and fight again. This is what I love to do, honestly.”