Behind The Night: Sonnen vs Filho 1

Check out the performance and promotion that almost stunted Sonnen’s career as well as everything else WEC ONLY on UFC FIGHT PASS!
By Walker Van Wey • Oct. 23, 2019

Take it from Chael Sonnen, life may be temporarily more difficult but you should never let cameras, referees or facts get in the way of good promoting.

Sonnen stepped into a WEC title fight after being away from the promotion for over three years. The combination of being a very established 21-9-1 veteran and Paulo Filho’s ranking in the world made it hard for the WEC to turn Sonnen away.

While we know WEC to be, historically, a top tier promotion of all time, the prestige is a little more in the imagination of the viewer than in reality. The allure of a WEC title shot is all within the appreciation of the sport and the clout that the words “former WEC champion” picked up through the years is definitely worthy of praise, but wasn’t the lavish, intense high life some may assume it was. 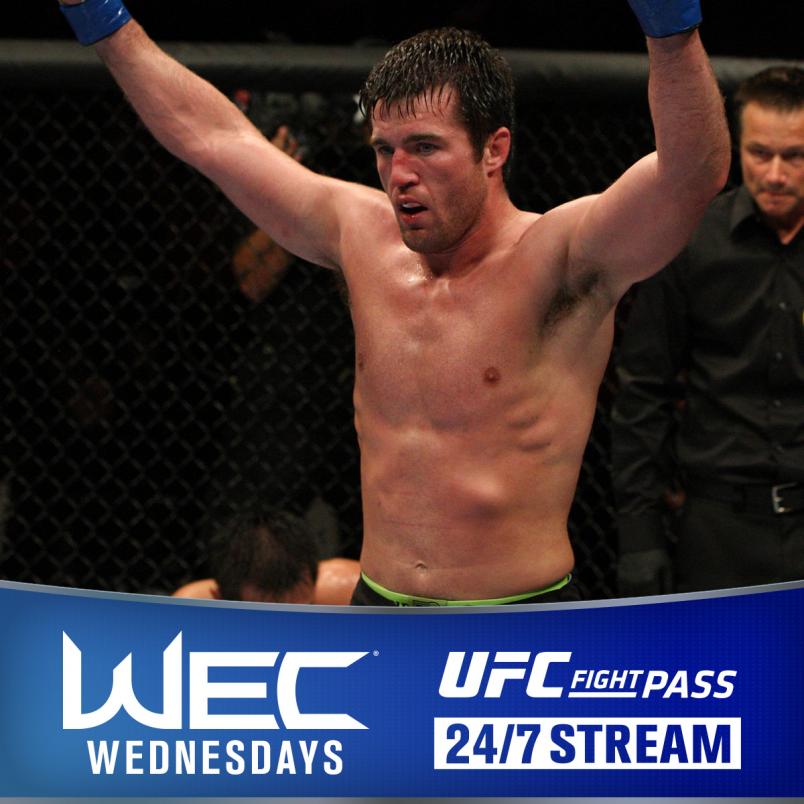 “The WEC, where it used to be was at The Hard Rock in a place called The Joint,” Sonnen recalls. “The Joint was just a venue in the Hard Rock and The Joint was a terrific venue for a Wednesday show that was trying to get off the ground. Point being, you’re not selling very many tickets. I remember my mother bought the cheap tickets. She’s at the bar, there was an actual bar in there and that’s kind of where her seat was, her back leaned up against the bar. The other side of the coin was that she was the very front row because there was nobody else there. I could hear every word that she said. There must have been 20 people in there. That’s an exaggeration but it’s not far off.”

With crowds that sparse, adrenaline lowers and it’s much harder to get lost in the moment of a fight, both a good and a bad thing by some standards. Adding to the missing experience, the fights weren’t even live. While the fights may be shown to the viewers on Saturday nights, the fights were typically scraped together on a Wednesday night. 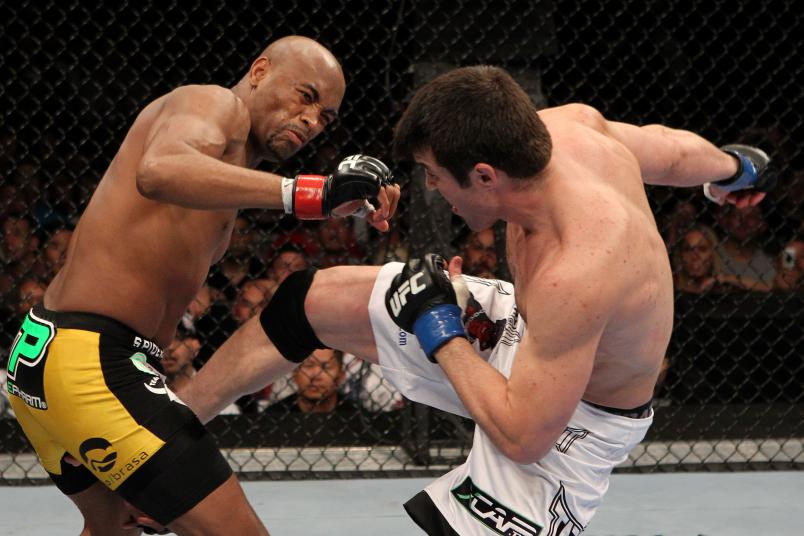 Everything from beginning, middle and end is different than expected. To go even further, even what a fighter builds up in their mind days out is squabbled by the reality behind the scenes. Foiled expectations would typically begin upon warmups.

“There’s not dressing rooms like in the back like there would be in a big arena,” Sonnen said. “What they had to do was makeshift a dressing room using some pipe and drape. Which means you literally take some pipes, piece them together and hang a drape over it. You’re separated from your opponent by not even a quarter inch of a sheet.”

Sonnen recalls looking around, seeing fighters like Urijah Faber and other faces of the WEC as they all tried to ignore the fact that they were possibly hearing their opponent nearly exploding pads. 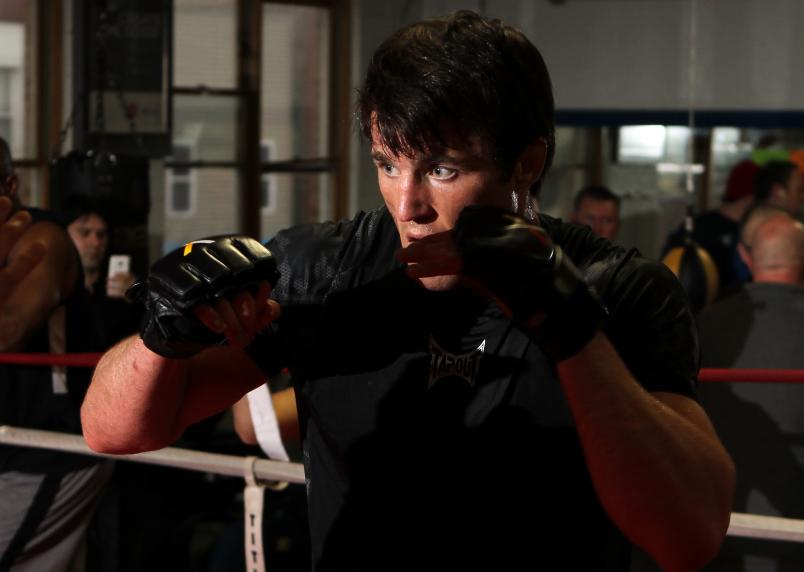 One by one the fighters started to disappear from the makeshift locker room. When it was time to walk out to the cage in front of the missing ambience, the twenty people in the crowd and the four on set cameras, Sonnen was greeted with yet another unexpected twist.

Even the walkout was made unnecessarily difficult which gave Sonnen yet another unexpected internal debate that just added to the growing list of unforeseen mental effort being put into details unrelated to the title fight.

“When we walked, you couldn’t even walk out in a normal fashion,” Sonnen said. “You had to leave the venue through a fire escape. Through a spiral staircase where you’re literally outside. Now that’s tricky. One of the biggest decisions you have to make on fight night is, ‘do I wear my shoes and take them off there? Or do I leave my shoes in the back so I know they’re safe and go barefoot?’ This is a big decision because if you’re wearing your shoes, you can’t wear your socks, so do you put your sweaty feet into your shoes and you’re not right or anything so you only have one pair of shoes it’s this whole thing. So I go barefoot. Well I don’t know that I have to go outside through a two-level spiral, metal fire escape.”

Reminded again you’re in for the hardest fight of your career? Check.

While every obstacle was put in front of Chael to mentally fold, once the cage was closed, it was business time. Long before Chael was “shocking the world” getting the better of a man “out of his league” in the UFC, he was locked in the WEC cage with the most touted man in all of MMA having nothing but success. 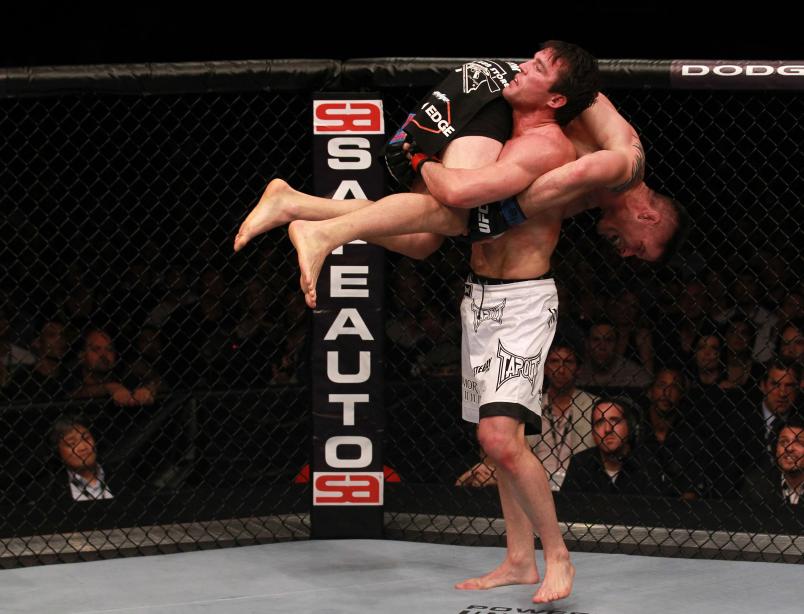 What comes next? You guessed it. A late submission from Filho ruining Sonnen’s title hopes.

In the height of the disappointment of losing the title fight, Sonnen was conflicted. Ahead of his time, Sonnen understood that in order to keep your name relevant and keep the interest in your career hot, promotion should always be in the front of a fighter’s mind. Win, lose or draw. While coming in second was a tough pill to swallow, a gift was placed in Sonnen’s lap. A soon to be controversial gift.

“I go out and fight Paulo Filho and he submits me, but he submitted me verbally,” Sonnen explained. “I either said, ‘aah!’ or I said, ‘tap’ but I for sure surrendered. Fair and square, I surrendered to a submission hold. A promotor got in the ring and comes over to me. I was dominating the fight; I was whipping his ass and then boom I get submitted in an armbar. The promotor jumped in the ring and he comes right over to me and he says, ‘cameras do not show a submission, say it didn’t happen, we’re going to rematch you,’ and he walks away.”

With a plan now in place, the loss became easier to deal with and Sonnen played accordingly. The post-fight interview had just become a lot easier to piece together. 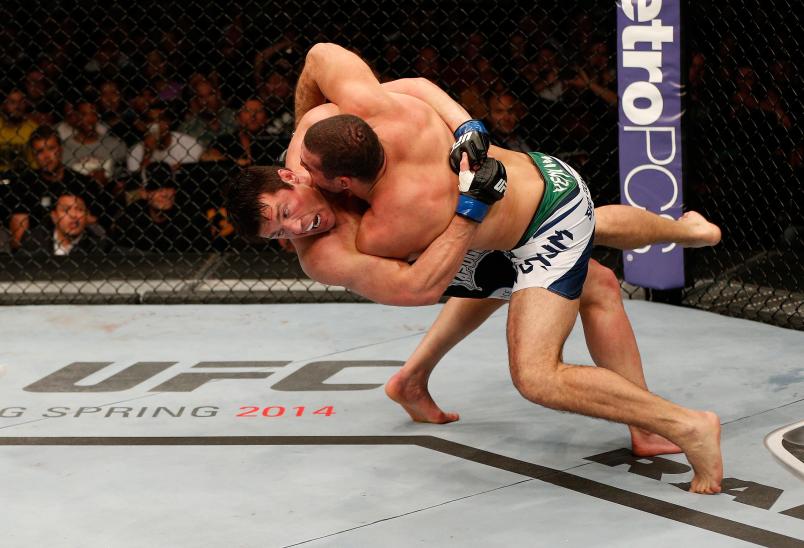 “The moment one fight ends, the marketing for the next one begins,” Sonnen said. “So I go right along with the script.”

In a fight world that was still relatively unfamiliar with self-promoting fights, “the script” came with far more than just the rematch with Filho for the same title he was an armbar away from winning. It almost cost Sonnen his fight license altogether.

“I end up getting a letter, a sanction,” Sonnen said. “The commissioner, he wanted to pull my license. He thought that was such a dirty thing to do to make a referee, one of his officials, look incompetent by lying. I told him straight away, I said, ‘I’m not saying I didn’t tap, I’m not filing a protest, I’m not denying this to a high up, I’m beginning the marketing for my next fight. I’m the heel. One thing that heels do is lie.’ That was the character I was playing. There’s no better way to be a dirty, disliked scumbag, than to lie.”

In an effort to smooth things over and explain his angle honestly and openly to the commissioner, Sonnen almost buried himself. The commissioner turned around and used the explanation as a confession and going above and beyond to get Sonnen banned from fighting altogether. Without insulting anybody, cursing or threatening anybody, Sonnen was staring down the barrel of a banned license in a matter of a few words.

With a rough relationship with the former commissioner, to this day, Sonnen was obviouisly able to continue fighting. He eventually got his rematch at his final WEC event, WEC 36. Sonnen was able to win the battle when his license wasn’t revoked but it was as if the MMA gods were helping the commission. Sonnen won but Filho failed to make weight and the title was no longer on the line.

Check out the performance and promotion that almost stunted Sonnen’s career as well as everything else WEC ONLY on UFC FIGHT PASS!